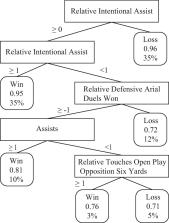 Knowledge of optimal technical performance is used to determine match strategy and the design of training programs. Previous studies in men’s soccer have identified certain technical characteristics that are related to success. These studies however, have relative limited sample sizes or limited ranges of performance indicators, which may have limited the analytical approaches that were used. Research in women’s soccer and our understanding of optimal technical performance, is even more limited (n = 3). Therefore, the aim of this study was to identify technical determinants of match outcome in the women’s game and to compare analytical approaches using a large sample size (n = 1390 team performances) and range of variables (n = 450). Three different analytical approaches (i.e. combinations of technical performance variables) were used, a data-driven approach, a rational approach and an approach based on the literature in men’s soccer. Match outcome was modelled using variables from each analytical approach, using generalised linear modelling and decision trees. It was found that the rational and data-driven approaches outperformed the literature-driven approach in predicting match outcome. The strongest determinants of match outcome were; scoring first, intentional assists relative to the opponent, the percentage of shots on goal saved by the goalkeeper relative to the opponent, shots on goal relative to the opponent and the percentage of duels that are successful. Moreover the rational and data-driven approach achieved higher prediction accuracies than comparable studies about men’s soccer.

Julen Castellano, David Casamichana, Ivann Carlos Lago (2012)
Three soccer World Cups were analysed with the aim of identifying the match statistics which best discriminated between winning, drawing and losing teams. The analysis was based on 177 matches played during the three most recent World Cup tournaments: Korea/Japan 2002 (59), Germany 2006 (59) and South Africa 2010 (59). Two categories of variables were studied: 1) those related to attacking play: goals scored, total shots, shots on target, shots off target, ball possession, number of off-sides committed, fouls received and corners; and 2) those related to defence: total shots received, shots on target received, shots off target received, off-sides received, fouls committed, corners against, yellow cards and red cards. Discriminant analysis of these matches revealed the following: (a) the variables related to attacking play that best differentiated between winning, drawing and losing teams were total shots, shots on target and ball possession; and (b) the most discriminating variables related to defence were total shots received and shots on target received. These results suggest that winning, drawing and losing national teams may be discriminated from one another on the basis of variables such as ball possession and the effectiveness of their attacking play. This information may be of benefit to both coaches and players, adding to their knowledge about soccer performance indicators and helping to guide the training process.

The author(s) received no specific funding for this work.

Data Availability The data that was used for this study was acquired from a third-party, formerly Opta Sports, now Stats Perform. The data was provided under a license agreement with Opta Sports/Stats Perform, and the data is also subject to an approved research ethics application from our University. The terms of the license agreement prevents us from sharing the raw data we used for this analysis. Our ethical approval also prevents us from sharing any data in any way that could be re-identified. The metadata and the (score) data itself would allow someone else to re-identify teams and possibly players. However, with the information below access to the data should be possible from the third-party. The data acquired were so called ‘excel dumps’ of team level statistics per match of the following leagues and tournaments: the American National Women’s Soccer League (NWSL) (2016-2018 seasons); the British Football Association Women's Super League (FAWSL) (2015/16-2017/18 seasons); the 2013 and 2017 UEFA Women’s Euros Championships; the 2011 and 2015 FIFA Women’s World Cups. Access to the data can be organised by contacting Stats Perform https://www.statsperform.com/contact/. The authors had no special access privileges.
ScienceOpen disciplines: Uncategorized
Data availability:
ScienceOpen disciplines: Uncategorized