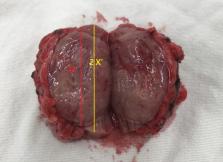 A total of 136 patients were enrolled, with a male to female ratio of 2:3 and a mean age of 57.8 years. Of these, 71 and 65 patients received open and robot-assisted surgery, respectively. Compared with the open group, patients who underwent robot-assisted surgery were significantly younger (56.0 versus 60.1 years old), had a longer operative time (303 versus 224 min), and a lower kidney ischemic time (33.4 versus 46.9 min). Given similar tumor sizes, the tumor-to-excision ratio was significantly higher in the robot-assisted group (51.7% versus 39.8%), and the excisional volume loss (EVL) was smaller (12.7 versus 19.6 mL). Preoperative glomerular filtration rate and EVL were significant predictors of long-term renal function preservation in the multivariate analysis.

When performing partial nephrectomy, a robot-assisted procedure could increase the accuracy of excision without increasing the risk of positive surgical margin. Lower EVL could assist in better long-term postoperative renal function preservation.

A Pantuck,  A Zisman,  A Belldegrun (2001)
Our understanding of the natural history of renal cell carcinoma, the role of nephrectomy, the benefits of immunotherapy and the possibilities of new technologies are evolving and being integrated with advances in classification and staging. We reviewed the relevant literature to clarify these pertinent questions and provide a current review of the changes in the epidemiology, treatment and prognosis of patients with renal cell carcinoma. We comprehensively reviewed the peer reviewed literature on the current management of and results of treatment for renal cell carcinoma. The incidence of and mortality from renal cell carcinoma have continuously increased during the last 50 years. Despite this increase in the number of new patients and consequently the number of deaths yearly the percent of those surviving for 5 years has notably improved. Factors related to improved survival include advances in renal imaging, earlier diagnosis, improved staging, better understanding of prognostic indicators, refinement in surgical technique and the introduction of immunotherapy approaches for advanced disease. Currently patients with localized and metastatic renal cell carcinoma have had improvements in outlook and the therapeutic options available have expanded.

Peter R. Carroll,  Christopher Kane,  K Mallin … (2008)
Evidence exists to suggest a pattern of increasing early diagnosis of renal cell carcinoma (RCC). The aim of the study was to analyze patterns of disease presentation and outcome of RCC by AJCC stage using data from the National Cancer Data Base (NCDB) over a 12-year period. The NCDB was queried for adults diagnosed between 1993 and 2004 presenting with ICD-O-2 of 3 renal cell tumors arising in the kidney. Cases were classified by demographics, 2002 AJCC stage (6th edition), and histology. The Cochran-Armitage Test for Trend was used to determine statistical significance of trends over time. Cox regression multivariate analysis was used to evaluate the impact of stage and histology on relative survival. SPSS 14.0 was used for analyses. Between 1993 and 2004 a total of 205,963 patients from the NCDB fit our case definition of RCC. Comparisons between 1993 and 2004 data show an increase in stage I disease and decrease in stage II, III, and IV disease (P < or = .001). The size of stage I tumors also decreased from a mean of 4.1 cm in 1993 to 3.6 cm in 2003. In multivariate analysis, stage, but not histology, predicted relative survival. A 3.3% increase in survival was found for patients diagnosed in 1998 compared with patients diagnosed in 1993. A greater proportion of newly diagnosed patients with RCC currently present with stage I disease compared with earlier years. Stage predicts relative survival for patients with kidney cancer. More recently diagnosed patients have improved relative survival. (Copyright) 2008 American Cancer Society.

Approach to the small renal mass: to treat or not to treat.

Simon P Kim,  R Thompson (2012)
Accurately conveying the benefits and risks of treatment interventions to patients diagnosed with small renal masses (SRMs) is essential to appropriately identify which patients will achieve better oncologic outcomes and confer a survival advantage from primary therapy. Treatment decisions to determine the ideal management with nephrectomy, thermal ablation, or active surveillance for patients diagnosed with an SRM remain highly complex. Existing prediction tools that incorporate various key clinical variables may facilitate an informed decision about the best management of SRM by more appropriately selecting treatment individualized to the characteristics of the SRM and the patient's clinical characteristics.