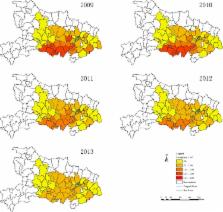 Schistosomiasis remains a major public health problem in China. The major endemic areas are located in the lake and marshland regions of southern China, particularly in areas along the middle and low reach of the Yangtze River. Spatial analytical techniques are often used in epidemiology to identify spatial clusters in disease regions. This study assesses the spatial distribution of schistosomiasis and explores high-risk regions in Hubei Province, China to provide guidance on schistosomiasis control in marshland regions.

In this study, spatial autocorrelation methodologies, including global Moran’s I and local Getis–Ord statistics, were utilized to describe and map spatial clusters and areas where human Schistosoma japonicum infection is prevalent at the county level in Hubei province. In addition, linear logistic regression model was used to determine the characteristics of spatial autocorrelation with time.

The infection rates of S. japonicum decreased from 2009 to 2013. The global autocorrelation analysis results on the infection rate of S. japonicum for five years showed statistical significance (Moran’s I > 0, P < 0.01), which suggested that spatial clusters were present in the distribution of S. japonicum infection from 2009 to 2013. Local autocorrelation analysis results showed that the number of highly aggregated areas ranged from eight to eleven within the five-year analysis period. The highly aggregated areas were mainly distributed in eight counties.

The spatial distribution of human S. japonicum infections did not exhibit a temporal change at the county level in Hubei Province. The risk factors that influence human S. japonicum transmission may not have changed after achieving the national criterion of infection control. The findings indicated that spatial–temporal surveillance of S. japonicum transmission plays a significant role on schistosomiasis control. Timely and integrated prevention should be continued, especially in the Yangtze River Basin of Jianghan Plain area.

The public health significance and control of schistosomiasis in China--then and now.

Xiao-Nong Zhou,  Li-ying Wang,  Ming-gang Chen … (2015)
The description of schistosomiasis in China dates back more than two millennia. The disease caused social and economic hardship, and the rates of morbidity and mortality were high. In the mid 1950s, when China's population was approximately 600 million, an estimated 11.6 million people were infected with Schistosoma japonicum. Hence, a national control programme was launched, with an emphasis on intermediate host snail control by means of environmental management. Over the past 50 years, the national control programme has made great progress and praziquantel-based morbidity control became the mainstay of control. In 2000, the number of infected people had been reduced to an estimated 694,788, the snail-infested area has been abridged by over 75%, and the disease had been eliminated in five of the 12 previously endemic provinces. Between the mid 1980s and 2003, the criteria of transmission interruption have been reached in 260 counties (60.0%), transmission control has been achieved in 63 counties (14.5%), but the disease was still endemic in the remaining 110 counties (25.4%). Comparison between the number of cases in 2000 and 2003 suggests that schistosomiasis has re-emerged; an estimated 843,011 people were infected with S. japonicum in 2003. Here, we provide a short historical account of the pubic health significance of schistosomiasis in China, highlight the progress made to date with the national control programme, and place particular emphasis on the most recent trends. Finally, we discuss remaining challenges for schistosomiasis control with the ultimate goal of disease elimination.

A strategy to control transmission of Schistosoma japonicum in China.

Jun Zeng,  Lin Hong,  Xiao-Nong Zhou … (2009)
Schistosoma japonicum causes an infection involving humans, livestock, and snails and is a significant cause of morbidity in China. We evaluated a comprehensive control strategy in two intervention villages and two control villages along Poyang Lake in the southeastern province of Jiangxi, where annual synchronous chemotherapy is routinely used. New interventions, implemented from 2005 through 2007, included removing cattle from snail-infested grasslands, providing farmers with mechanized farm equipment, improving sanitation by supplying tap water and building lavatories and latrines, providing boats with fecal-matter containers, and implementing an intensive health-education program. During the intervention period, we observed changes in S. japonicum infection in humans, measured the rate of infection in snails, and tested the infectivity of lake water in mice. After three transmission seasons, the rate of infection in humans decreased to less than 1.0% in the intervention villages, from 11.3% to 0.7% in one village and from 4.0% to 0.9% in the other (P<0.001 for both comparisons). The rate of infection in humans in control villages fluctuated but remained at baseline levels. In intervention villages, the percentage of sampling sites with infected snails decreased from 2.2% to 0.1% in one grassland area and from 0.3% to no infection in the other (P<0.001 for both comparisons). The rate of infection in mice after exposure to lake water decreased from 79% to no infection (P<0.001). A comprehensive control strategy based on interventions to reduce the rate of transmission of S. japonicum infection from cattle and humans to snails was highly effective. These interventions have been adopted as the national strategy to control schistosomiasis in China. 2009 Massachusetts Medical Society

Jürg Utzinger,  Xiao-Nong Zhou,  Ming-gang Chen … (2015)
The last half-century of schistosomiasis control activities in China have brought down the overall prevalence of human infection with Schistosoma japonicum to less than 10% of the level initially documented in the mid 1950s. Importantly, this reduction is not only, or even mainly, due to the advent of praziquantel in the 1970s and its subsequent dramatic fall in price. Instead, it is the result of a sustained, multifaceted national strategy, adapted to different eco-epidemiological settings, which has been versatile enough to permit subtle adjustments over time as the nature of the challenge changed. Consequently, prevalence has been falling relatively smoothly over the whole period rather than suddenly dropping when mass chemotherapy became feasible. Thus, early recognition of the huge public health and economic significance of the disease, and the corresponding political will to do something about it,underpinned this success. In addition, intersectoral collaboration and community participation played important roles in forming a sustained commitment to a working control strategy based on local resources. The unfolding story is presented from the early years' strong focus on snail control, by means of environmental management, to the last period of praziquantel-based morbidity control carried out under the 10-year World Bank Loan Project (WBLP). An important legacy of the WBLP is the understanding that a research component would sustain control measures and enable future progress. We are now witnessing the payoffs of this forward thinking in the form of a new promising class of drugs, improved diagnostics, and budding vaccine development in addition to novel ways of disease risk prediction and transmission control using satellite-based remote sensing. Different aspects of social and economic approaches are also covered and the importance of health promotion and education is emphasized. Issuing from the review is a set of recommendations, which might further consolidate current control activities, with the ultimate aim to eliminate schistosomiasis from the Chinese mainland.

This study was funded by the Provinal Research of Schistosomiasis Prevention of Health Department of Hubei, China (XF2012-24,XF2012-26). The funders had no role in study design, data collection and analysis, decision to publish, or preparation of the manuscript.