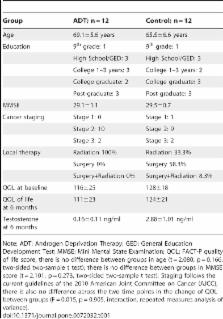 ADT can affect cerebral gray matter volumes in prostate cancer patients. If replicated, these results may facilitate future studies of cognitive function and quality of life in men receiving ADT, and can also help clinicians weigh the benefits and risks of hormonal therapy in the treatment of prostate cancer.

Alex P Zijdenbos,  Alan Evans,  JUSSI TOHKA (2004)
Due to the finite spatial resolution of imaging devices, a single voxel in a medical image may be composed of mixture of tissue types, an effect known as partial volume effect (PVE). Partial volume estimation, that is, the estimation of the amount of each tissue type within each voxel, has received considerable interest in recent years. Much of this work has been focused on the mixel model, a statistical model of PVE. We propose a novel trimmed minimum covariance determinant (TMCD) method for the estimation of the parameters of the mixel PVE model. In this method, each voxel is first labeled according to the most dominant tissue type. Voxels that are prone to PVE are removed from this labeled set, following which robust location estimators with high breakdown points are used to estimate the mean and the covariance of each tissue class. Comparisons between different methods for parameter estimation based on classified images as well as expectation--maximization-like (EM-like) procedure for simultaneous parameter and partial volume estimation are reported. The robust estimators based on a pruned classification as presented here are shown to perform well even if the initial classification is of poor quality. The results obtained are comparable to those obtained using the EM-like procedure, but require considerably less computation time. Segmentation results of real data based on partial volume estimation are also reported. In addition to considering the parameter estimation problem, we discuss differences between different approximations to the complete mixel model. In summary, the proposed TMCD method allows for the accurate, robust, and efficient estimation of partial volume model parameters, which is crucial to a variety of brain MRI data analysis procedures such as the accurate estimation of tissue volumes and the accurate delineation of the cortical surface.

Montserrat Robles,  José Manjón,  Pierrick Coupé … (2009)
To adapt the so-called nonlocal means filter to deal with magnetic resonance (MR) images with spatially varying noise levels (for both Gaussian and Rician distributed noise). Most filtering techniques assume an equal noise distribution across the image. When this assumption is not met, the resulting filtering becomes suboptimal. This is the case of MR images with spatially varying noise levels, such as those obtained by parallel imaging (sensitivity-encoded), intensity inhomogeneity-corrected images, or surface coil-based acquisitions. We propose a new method where information regarding the local image noise level is used to adjust the amount of denoising strength of the filter. Such information is automatically obtained from the images using a new local noise estimation method. The proposed method was validated and compared with the standard nonlocal means filter on simulated and real MRI data showing an improved performance in all cases. The new noise-adaptive method was demonstrated to outperform the standard filter when spatially varying noise is present in the images. (c) 2009 Wiley-Liss, Inc.

J.C. Rajapakse,  J.N. Giedd,  J.L. Rapoport (1997)
A statistical model is presented that represents the distributions of major tissue classes in single-channel magnetic resonance (MR) cerebral images. Using the model, cerebral images are segmented into gray matter, white matter, and cerebrospinal fluid (CSF). The model accounts for random noise, magnetic field inhomogeneities, and biological variations of the tissues. Intensity measurements are modeled by a finite Gaussian mixture. Smoothness and piecewise contiguous nature of the tissue regions are modeled by a three-dimensional (3-D) Markov random field (MRF). A segmentation algorithm, based on the statistical model, approximately finds the maximum a posteriori (MAP) estimation of the segmentation and estimates the model parameters from the image data. The proposed scheme for segmentation is based on the iterative conditional modes (ICM) algorithm in which measurement model parameters are estimated using local information at each site, and the prior model parameters are estimated using the segmentation after each cycle of iterations. Application of the algorithm to a sample of clinical MR brain scans, comparisons of the algorithm with other statistical methods, and a validation study with a phantom are presented. The algorithm constitutes a significant step toward a complete data driven unsupervised approach to segmentation of MR images in the presence of the random noise and intensity inhomogeneities.

Competing Interests: Dr. Edward Uchio who participated in this study as an employee of the Department of Veterans Affairs/US government is currently employed by a private company, Tower Research, Los Angeles, CA. The authors confirm that there are no competing interests as a result of the current employment and that this does not alter the authors’ adherence to all the PLOS ONE policies on sharing data and materials.

This study was supported by NIH grant R03CA138121 to H.H.C., a Yale Cancer Center/Connecticut Challenge Survivorship pilot award, and VA Urology Research Sectional Funding. The funding agencies had no further role in study design; in the collection, analysis and interpretation of data; in the writing of the report; or in the decision to submit the paper for publication.