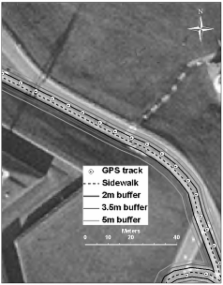 An increasing number of studies suggest that characteristics of context, or the attributes of the places within which we live, work and socialize, are associated with variations in health-related behaviours and outcomes. The challenge for health research is to ensure that these places are accurately represented spatially, and to identify those aspects of context that are related to variations in health and amenable to modification. This study focuses on the design of a wearable global positioning system (GPS) data logger for the purpose of objectively measuring the temporal and spatial features of human activities. Person-specific GPS data provides a useful source of information to operationalize the concept of place.

We designed and tested a lightweight, wearable GPS receiver, capable of logging location information for up to 70 hours continuously before recharging. The device is accurate to within 7 m in typical urban environments and performs well across a range of static and dynamic conditions.

Rather than rely on static areal units as proxies for places, wearable GPS devices can be used to derive a more complete picture of the different places that influence an individual's wellbeing. The measures are objective and are less subject to biases associated with recall of location or misclassification of contextual attributes. This is important for two reasons. First, it brings a dynamic perspective to place and health research. The influence of place on health is dynamic in that certain places are more or less relevant to wellbeing as determined by the length of time in any location and by the frequency of activity in the location. Second, GPS data can be used to assess whether the characteristics of places at specific times are useful to explaining variations in health and wellbeing.

Place effects on health: how can we conceptualise, operationalise and measure them?

Sally Macintyre,  Anne Ellaway,  Steven Cummins (2002)
In this paper we highlight what we consider to be a lack of adequate conceptualisation. operationalisation and measurement of "place effects". We briefly review recent historical trends in the study of the effects of place on health in industrial countries, and argue that "place effects" often appear to have the status of a residual category, an unspecified black box of somewhat mystical influences on health which remain after investigators have controlled for a range of individual and place characteristics. We note that the distinction between "composition" and "context" may be more apparent than real, and that features of both material infrastructure and collective social functioning may influence health. We suggest using a framework of universal human needs as a basis for thinking about how places may influence health, and recommend the testing of hypotheses about specific chains of causation that might link place of residence with health outcomes.

Geocoding and monitoring of US socioeconomic inequalities in mortality and cancer incidence: does the choice of area-based measure and geographic level matter?: the Public Health Disparities Geocoding Project.

N Krieger (2002)
Despite the promise of geocoding and use of area-based socioeconomic measures to overcome the paucity of socioeconomic data in US public health surveillance systems, no consensus exists as to which measures should be used or at which level of geography. The authors generated diverse single-variable and composite area-based socioeconomic measures at the census tract, block group, and zip code level for Massachusetts (1990 population: 6,016,425) and Rhode Island (1990 population: 1,003,464) to investigate their associations with mortality rates (1989-1991: 156,366 resident deaths in Massachusetts and 27,291 in Rhode Island) and incidence of primary invasive cancer (1988-1992: 140,610 resident cases in Massachusetts; 1989-1992: 19,808 resident cases in Rhode Island). Analyses of all-cause and cause-specific mortality rates and all-cause and site-specific cancer incidence rates indicated that: 1) block group and tract socioeconomic measures performed comparably within and across both states, but zip code measures for several outcomes detected no gradients or gradients contrary to those observed with tract and block group measures; 2) similar gradients were detected with categories generated by quintiles and by a priori categorical cutpoints; and 3) measures including data on economic poverty were most robust and detected gradients that were unobserved using measures of only education and wealth.