Ecological Specialization and Rarity of Arable Weeds: Insights from a Comprehensive Survey in France 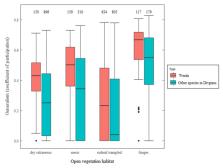 The definition of “arable weeds” remains contentious. Although much attention has been devoted to specialized, segetal weeds, many taxa found in arable fields also commonly occur in other habitats. The extent to which adjacent habitats are favorable to the weed flora and act as potential sources of colonizers in arable fields remains unclear. In addition, weeds form assemblages with large spatiotemporal variability, so that many taxa in weed flora are rarely observed in plot-based surveys. We thus addressed the following questions: How often do weeds occur in other habitats than arable fields? How does including field edges extend the taxonomic and ecological diversity of weeds? How does the weed flora vary across surveys at different spatial and temporal scales? We built a comprehensive dataset of weed taxa in France by compiling weed flora, lists of specialized segetal weeds, and plot-based surveys in agricultural fields, with different spatial and temporal coverages. We informed life forms, biogeographical origins and conservation status of these weeds. We also defined a broader dataset of plants occupying open habitats in France and assessed habitat specialization of weeds and of other plant species absent from arable fields. Our results show that many arable weeds are frequently recorded in both arable fields and non-cultivated open habitats and are, on average, more generalist than species absent from arable fields. Surveys encompassing field edges included species also occurring in mesic grasslands and nitrophilous fringes, suggesting spill-over from surrounding habitats. A total of 71.5% of the French weed flora was not captured in plot-based surveys at regional and national scales, and many rare and declining taxa were of Mediterranean origin. This result underlines the importance of implementing conservation measures for specialist plant species that are particularly reliant on arable fields as a habitat, while also pointing out biotic homogenization of agricultural landscapes as a factor in the declining plant diversity of farmed landscapes. Our dataset provides a reference species pool for France, with associated ecological and biogeographical information.

European Yearbook of the History of Psychology

Roger Guimerà,  Luís Amaral (2005)
Integrative approaches to the study of complex systems demand that one knows the manner in which the parts comprising the system are connected. The structure of the complex network defining the interactions provides insight into the function and evolution of the components of the system. Unfortunately, the large size and intricacy of these networks implies that such insight is usually difficult to extract. Here, we propose a method that allows one to systematically extract and display information contained in complex networks. Specifically, we demonstrate that one can (i) find modules in complex networks and (ii) classify nodes into universal roles according to their pattern of within- and between-module connections. The method thus yields a 'cartographic representation' of complex networks.

Meelis Pärtel,  Robert Szava-Kovats,  Martin Zobel (2011)
Ecological theory and nature conservation have traditionally relied solely on observed local diversity. In this review, we recommend including those species that are absent from an ecosystem but which belong to its species pool; that is, all species in the region that can potentially inhabit those particular ecological conditions. We call the set of absent species 'dark diversity'. Relating local and dark diversities enables biodiversity comparisons between regions, ecosystems and taxonomic groups, and the evaluation of the roles of local and regional processes in ecological communities. Dark diversity can also be used to counteract biodiversity loss and to estimate the restoration potential of ecosystems. We illustrate the dark diversity concept by globally mapping plant dark diversity and the local:dark diversity ratio. Copyright © 2010 Elsevier Ltd. All rights reserved.

Biotic homogenization and changes in species diversity across human-modified ecosystems.

Douglas L Maskell,  Oliver Smart,  Leslie G. Firbank … (2006)
Changing land use and the spread of 'winning' native or exotic plants are expected to lead to biotic homogenization (BH), in which previously distinct plant communities become progressively more similar. In parallel, many ecosystems have recently seen increases in local species (alpha-) diversity, yet gamma-diversity has continued to decline at larger scales. Using national ecological surveillance data for Great Britain, we quantify relationships between change in alpha-diversity and between-habitat homogenizations at two levels of organization: species composition and plant functional traits. Across Britain both increases and decreases in alpha-diversity were observed in small random sampling plots (10-200m2) located within a national random sample of 1km square regions. As alpha-diversity declined (spatially in 1978 or temporally between 1978 and 1998), plant communities became functionally more similar, but species-compositional similarity declined. Thus, different communities converged on a narrower range of winning trait syndromes, but species identities remained historically contingent, differentiating a mosaic of residual species-poor habitat patches within each 1km square. The reverse trends in beta-diversity occurred where alpha-diversity increased. When impacted by the same type and intensity of environmental change, directions of change in alpha-diversity are likely to depend upon differences in starting productivity and disturbance. This is one reason why local diversity change and BH across habitats are not likely to be consistently coupled.