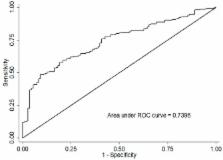 Background: HLA-DM gene, which is related to antigen processing and presentation and located in the non-classical class-II region of human leukocyte antigen (HLA) region, may play a crucial role in chronic hepatitis C virus (HCV) infection treatment outcomes. The study was conducted to evaluate the role of the variant of several single nucleotide polymorphisms (SNPs) in HLA-DM gene in HCV treatment outcomes. Methods: We genotyped four SNPs from the candidate genes ( HLA-DMA and DMB) in 336 patients who were treated with pegylated interferon-alpha and ribavirin (PEG IFN-α/RBV). Multivariate analysis of factors predicting sustained virological response (SVR) was conducted. Results: HLA-DMA rs1063478 and DMB rs23544 were independent factors of HCV treatment outcomes in Chinese Han population. Individuals who carried favorable genotypes of rs1063478TT and rs23544GG were more likely to achieve SVR {Dominant model: odds ratio (OR) = 2.05, 95% confidence interval (CI) = 1.24–3.41; OR = 2.04, 95% CI =1.23–3.35, respectively}. Rs23544, rs1063478, baseline glucose, baseline platelet and T4 level were independent predictors of SVR. The area under the receiver operating characteristic (ROC) curve (AUC) was 0.740. Conclusions: The genetic variation of rs1063478 and rs23544 are associated with the treatment outcomes in the Chinese Han population.

D Lavanchy (2011)
More than 20 years after the discovery of the hepatitis C virus (HCV), it is now well established that HCV is of global importance affecting all countries, leading to a major global health problem that requires widespread active interventions for its prevention and control. Chronic hepatitis C was linked to the development of cirrhosis and hepatocellular carcinoma in many areas of the world. Current epidemiological assessments have identified complex patterns with highly variable local prevalence rates between countries and within countries. HCV infection patterns have not significantly changed in most parts of the world since 1997, when first analyzed, partly due to the lack of new and more accurate data. The assessment of the national HCV prevalence and transmission modes should be completed to enable national authorities to prioritize preventive measures and to make the most appropriate use of available resources. The 'patchy' epidemiological situation in some areas will continue to complicate the task of the establishment of global, regional and national base line data. The present assessment finds a global prevalence of 2.35%, affecting 160 million chronically infected individuals. There is an urgent need for more accurate Information on the costs and burden of HCV to society. Twenty-one year after the discovery of HCV, the assessment is far from being complete and little progress has been made in the past 10 years in many countries. In some countries significant increases have been reported and this may also apply to countries were insufficient data exist. A safe and efficient vaccine against HCV is urgently needed. © 2011 The Author. Clinical Microbiology and Infection © 2011 European Society of Clinical Microbiology and Infectious Diseases.

M Alter,  Harvey Alter (2007)
Globally, hepatitis C virus (HCV) has infected an estimated 130 million people, most of whom are chronically infected. HCV-infected people serve as a reservoir for transmission to others and are at risk for developing chronic liver disease, cirrhosis, and primary hepatocellular carcinoma (HCC). It has been estimated that HCV accounts for 27% of cirrhosis and 25% of HCC worldwide. HCV infection has likely been endemic in many populations for centuries. However, the wave of increased HCV-related morbidity and mortality that we are now facing is the result of an unprecedented increase in the spread of HCV during the 20th century. Two 20th century events appear to be responsible for this increase; the widespread availability of injectable therapies and the illicit use of injectable drugs.

Defining the Role of the MHC in Autoimmunity: A Review and Pooled Analysis

Michelle Fernando,  Christine Stevens,  Emily Walsh … (2008)
The major histocompatibility complex (MHC) is one of the most extensively studied regions in the human genome because of the association of variants at this locus with autoimmune, infectious, and inflammatory diseases. However, identification of causal variants within the MHC for the majority of these diseases has remained difficult due to the great variability and extensive linkage disequilibrium (LD) that exists among alleles throughout this locus, coupled with inadequate study design whereby only a limited subset of about 20 from a total of approximately 250 genes have been studied in small cohorts of predominantly European origin. We have performed a review and pooled analysis of the past 30 years of research on the role of the MHC in six genetically complex disease traits – multiple sclerosis (MS), type 1 diabetes (T1D), systemic lupus erythematosus (SLE), ulcerative colitis (UC), Crohn's disease (CD), and rheumatoid arthritis (RA) – in order to consolidate and evaluate the current literature regarding MHC genetics in these common autoimmune and inflammatory diseases. We corroborate established MHC disease associations and identify predisposing variants that previously have not been appreciated. Furthermore, we find a number of interesting commonalities and differences across diseases that implicate both general and disease-specific pathogenetic mechanisms in autoimmunity.