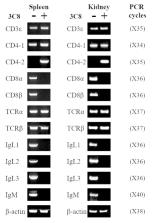 The presence of CD4 T lymphocytes has been described for several teleost species, while many of the main T cell subsets have not been characterized at a cellular level, because of a lack of suitable tools for their identification, e.g., monoclonal antibodies (mAbs) against cell markers. We previously described the tissue distribution and immune response related to CD3ε and CD4-1 T cells in olive flounder ( Paralichthys oliveceus) in response to a viral infection. In the present study, we successfully produce an mAb against CD4-2 T lymphocytes from olive flounder and confirmed its specificity using immuno-blotting, immunofluorescence staining, flow cytometry analysis and reverse transcription polymerase chain reaction (RT-PCR). Using these mAbs, we were able to demonstrate that the CD3ε T cell populations contain both types of CD4 + cells, with the majority of the CD4 T cell subpopulations being CD4-1 +/CD4-2 + cells, determined using two-color flow cytometry analysis. We also examined the functional activity of the CD4-1 and CD4-2 cells in vivo in response to a viral infection, with the numbers of both types of CD4 T cells increasing significantly during the virus infection. Collectively, these findings suggest that the CD4 T lymphocytes in olive flounder are equivalent to the helper T cells in mammals in terms of their properties and function, and it is the CD4-2 T lymphocytes rather than the CD4-1 T cells that play an important role in the Th1 immune response against viral infections in olive flounder.

David C. Parish,  Ronan Lyons (1994)
Techniques currently available for determining cell division are able to show one or, at best, a limited number of cell divisions. Other methods exist which can quantify overall division, but tell nothing about the division history of individual cells. Here we present a new technique in which an intracellular fluorescent label is divided equally between daughter cells upon cell division. The technique is applicable to in vitro cell division, as well as in vivo division of adoptively transferred cells, and can resolve multiple successive generations using flow cytometry. The label is fluorescein derived, allowing monoclonal antibodies conjugated to phycoerythrin or other compatible fluorochromes to be used to immunophenotype the dividing cells.

Noncytolytic control of viral infections by the innate and adaptive immune response.

F V Chisari,  Tee Guidotti (2000)
This review describes the contribution of noncytolytic mechanisms to the control of viral infections with a particular emphasis on the role of cytokines in these processes. It has long been known that most cell types in the body respond to an incoming viral infection by rapidly secreting antiviral cytokines such as interferon alpha/beta (IFN-alpha/beta). After binding to specific receptors on the surface of infected cells, IFN-alpha/beta has the potential to trigger the activation of multiple noncytolytic intracellular antiviral pathways that can target many steps in the viral life cycle, thereby limiting the amplification and spread of the virus and attenuating the infection. Clearance of established viral infections, however, requires additional functions of the immune response. The accepted dogma is that complete clearance of intracellular viruses by the immune response depends on the destruction of infected cells by the effector cells of the innate and adaptive immune system [natural killer (NK) cells and cytotoxic T cells (CTLs)]. This notion, however, has been recently challenged by experimental evidence showing that much of the antiviral potential of these cells reflects their ability to produce antiviral cytokines such as IFN-gamma and tumor necrosis factor (TNF)-alpha at the site of the infection. Indeed, these cytokines can purge viruses from infected cells noncytopathically as long as the cell is able to activate antiviral mechanisms and the virus is sensitive to them. Importantly, the same cytokines also control viral infections indirectly, by modulating the induction, amplification, recruitment, and effector functions of the immune response and by upregulating antigen processing and display of viral epitopes at the surface of infected cells. In keeping with these concepts, it is not surprising that a number of viruses encode proteins that have the potential to inhibit the antiviral activity of cytokines.

Deborah Lewinsohn,  David Lewinsohn,  Thomas Scriba (2017)
Tuberculosis (TB), caused by Mycobacterium tuberculosis (Mtb), remains a leading cause of morbidity and mortality worldwide, despite the widespread use of the only licensed vaccine, Bacille Calmette Guerin (BCG). Eradication of TB will require a more effective vaccine, yet evaluation of new vaccine candidates is hampered by lack of defined correlates of protection. Animal and human studies of intracellular pathogens have extensively evaluated polyfunctional CD4+ T cells producing multiple pro-inflammatory cytokines (IFN-γ, TNF-α, and IL-2) as a possible correlate of protection from infection and disease. In this study, we review the published literature that evaluates whether or not BCG and/or novel TB vaccine candidates induce polyfunctional CD4+ T cells and if these T cell responses correlate with vaccine-mediated protection. Ample evidence suggests that BCG and several novel vaccine candidates evaluated in animal models and humans induce polyfunctional CD4+ T cells. However, while a number of studies utilizing the mouse TB model support that polyfunctional CD4+ T cells are associated with vaccine-induced protection, other studies in mouse and human infants demonstrate no correlation between these T cell responses and protection. We conclude that induction of polyfunctional CD4+ T cells is certainly not sufficient and may not even be necessary to mediate protection and suggest that other functional attributes, such as additional effector functions, T cell differentiation state, tissue homing potential, or long-term survival capacity of the T cell may be equally or more important to promote protection. Thus, a correlate of protection for TB vaccine development remains elusive. Future studies should address polyfunctional CD4+ T cells within the context of more comprehensive immunological signatures of protection that include other functions and phenotypes of T cells as well as the full spectrum of immune cells and mediators that participate in the immune response against Mtb.