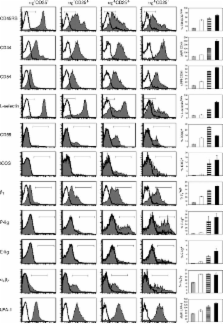 Ethan Shevach,  Yasmine Belkaid,  Susana Mendez … (2002)
The long-term persistence of pathogens in a host that is also able to maintain strong resistance to reinfection, referred to as concomitant immunity, is a hallmark of certain infectious diseases, including tuberculosis and leishmaniasis. The ability of pathogens to establish latency in immune individuals often has severe consequences for disease reactivation. Here we show that the persistence of Leishmania major in the skin after healing in resistant C57BL/6 mice is controlled by an endogenous population of CD4+CD25+ regulatory T cells. These cells constitute 5-10% of peripheral CD4+ T cells in naive mice and humans, and suppress several potentially pathogenic responses in vivo, particularly T-cell responses directed against self-antigens. During infection by L. major, CD4+CD25+ T cells accumulate in the dermis, where they suppress-by both interleukin-10-dependent and interleukin-10-independent mechanisms-the ability of CD4+CD25- effector T cells to eliminate the parasite from the site. The sterilizing immunity achieved in mice with impaired IL-10 activity is followed by the loss of immunity to reinfection, indicating that the equilibrium established between effector and regulatory T cells in sites of chronic infection might reflect both parasite and host survival strategies.

Scott Reed,  Sabah A. R. K. Naji,  A Holenbeck … (2001)
Despite accumulating evidence that regulatory T cells play a crucial role in preventing autoimmunity, the processes underlying their generation during immune repertoire formation are unknown. We show here that interactions with a single self-peptide can induce thymocytes that bear an autoreactive T cell receptor (TCR) to undergo selection to become CD4+CD25+ regulatory T cells. Selection of CD4+CD25+ thymocytes appears to require a TCR with high affinity for a self peptide because thymocytes that bear TCRs with low affinity do not undergo selection into this pathway. Our findings indicate that specificity for self-peptides directs the selection of CD4+CD25+ regulatory thymocytes by a process that is distinct from positive selection and deletion.

Hamed Abbas,  Jeffrey Bluestone (2003)
The regulation of immune responses to self-antigens is a complex process that involves maintaining self-tolerance while retaining the capacity to mount robust immune responses against invading microorganisms. Over the past few years, many new insights into this process have been gained, leading to the re-emergence of the idea that regulatory T (T(Reg)) cells are a central mechanism of immune regulation. These insights have raised fundamental questions concerning what constitutes a T(Reg) cell, where they develop and what signals maintain T(Reg)-cell populations in a functional state. Here, we propose the existence of two subsets of CD4+ T(Reg) cells--natural and adaptive--that differ in terms of their development, specificity, mechanism of action and dependence on T-cell receptor and co-stimulatory signalling.