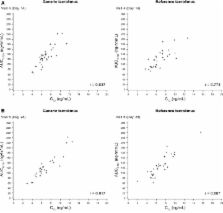 A comparison of the two one-sided tests procedure and the power approach for assessing the equivalence of average bioavailability.

High within-patient variability in the clearance of tacrolimus is a risk factor for poor long-term outcome after kidney transplantation.

The impact of conversion from prograf to generic tacrolimus in liver and kidney transplant recipients with stable graft function.

T Ridenour,  Lori R. Shapiro,  A Humar … (2011)
Bioequivalence of the recently available generic tacrolimus formulation, manufactured by Sandoz, to the reference product (Prograf; Astellas Pharma, Tokyo, Japan) has been demonstrated in healthy subjects. However, the safety and efficacy of substitution with generic tacrolimus in transplant patients have not been evaluated. Tacrolimus trough concentrations and indices of liver and kidney function were recorded before and after generic substitution in 48 liver and 55 kidney transplant recipients. In liver transplant patients, the mean tacrolimus concentration/dose (C/D) ratio (± SD) was 184.1 (± 123.2) ([ng/mL]/[mg/kg/day]) for the reference product and 154.7 (± 87.8) ([ng/mL]/[mg/kg/day]) for the generic product (p < 0.05). The mean C/D-ratios in kidney transplant patients were 125.3 (± 92.7) and 110.4 (± 79.2) ([ng/mL]/[mg/kg/day]) for the reference and generic products, respectively (p < 0.05). Actual trough concentrations declined by an average of 1.98 ng/mL in liver and 0.87 ng/mL in kidney transplant patients following the switch, after accounting for all significant covariates. No change was observed in biochemical indices of liver or kidney function and no cases of acute rejection occurred following the substitution. These results suggest that transplant patients currently taking the reference tacrolimus formulation may be safely switched to the Sandoz-generic product provided trough concentrations are closely monitored following the substitution. © 2011 The Authors Journal compilation © 2011 The American Society of Transplantation and the American Society of Transplant Surgeons.

Re-use of this article is permitted in accordance with the Terms and Conditions set out at http://wileyonlinelibrary.com/onlineopen#OnlineOpen_Terms