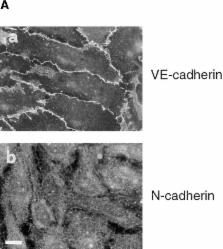 The two major cadherins of endothelial cells are neural (N)-cadherin and vascular endothelial (VE)- cadherin. Despite similar level of protein expression only VE-cadherin is located at cell–cell contacts, whereas N-cadherin is distributed over the whole cell membrane. Cotransfection of VE-cadherin and N-cadherin in CHO cells resulted in the same distribution as that observed in endothelial cells indicating that the behavior of the two cadherins was not cell specific but related to their structural characteristics. Similar amounts of α- and β-catenins and plakoglobin were associated to VE- and N-cadherins, whereas p120 was higher in the VE-cadherin complex. The presence of VE-cadherin did not affect N-cadherin homotypic adhesive properties or its capacity to localize at junctions when cotransfectants were cocultured with cells transfected with N-cadherin only. To define the molecular domain responsible for the VE-cadherin–dominant activity we prepared a chimeric construct formed by VE-cadherin extracellular region linked to N-cadherin intracellular domain. The chimera lost the capacity to exclude N-cadherin from junctions indicating that the extracellular domain of VE-cadherin alone is not sufficient for the preferential localization of the molecule at the junctions. A truncated mutant of VE-cadherin retaining the full extracellular domain and a short cytoplasmic tail (Arg 621–Pro 702) lacking the catenin-binding region was able to exclude N-cadherin from junctions. This indicates that the Arg 621–Pro 702 sequence in the VE-cadherin cytoplasmic tail is required for N-cadherin exclusion from junctions. Competition between cadherins for their clustering at intercellular junctions in the same cell has never been described before. We speculate that, in the endothelium, VE- and N-cadherin play different roles; whereas VE-cadherin mostly promotes the homotypic interaction between endothelial cells, N-cadherin may be responsible for the anchorage of the endothelium to other surrounding cell types expressing N-cadherin such as vascular smooth muscle cells or pericytes.

Cell adhesion: the molecular basis of tissue architecture and morphogenesis.

B Gumbiner (1996)
A variety of cell adhesion mechanisms underlie the way that cells are organized in tissues. Stable cell interactions are needed to maintain the structural integrity of tissues, and dynamic changes in cell adhesion participate in the morphogenesis of developing tissues. Stable interactions actually require active adhesion mechanisms that are very similar to those involved in tissue dynamics. Adhesion mechanisms are highly regulated during tissue morphogenesis and are intimately related to the processes of cell motility and cell migration. In particular, the cadherins and the integrins have been implicated in the control of cell movement. Cadherin mediated cell compaction and cellular rearrangements may be analogous to integrin-mediated cell spreading and motility on the ECM. Regulation of cell adhesion can occur at several levels, including affinity modulation, clustering, and coordinated interactions with the actin cytoskeleton. Structural studies have begun to provide a picture of how the binding properties of adhesion receptors themselves might be regulated. However, regulation of tissue morphogenesis requires complex interactions between the adhesion receptors, the cytoskeleton, and networks of signaling pathways. Signals generated locally by the adhesion receptors themselves are involved in the regulation of cell adhesion. These regulatory pathways are also influenced by extrinsic signals arising from the classic growth factor receptors. Furthermore, signals generated locally be adhesion junctions can interact with classic signal transduction pathways to help control cell growth and differentiation. This coupling between physical adhesion and developmental signaling provides a mechanism to tightly integrate physical aspects of tissue morphogenesis with cell growth and differentiation, a coordination that is essential to achieve the intricate patterns of cells in tissues.

Peter C. M. Molenaar,  S Godsave,  J Roose … (1996)
XTcf-3 is a maternally expressed Xenopus homolog of the mammalian HMG box factors Tcf-1 and Lef-1. The N-terminus of XTcf-3 binds to beta-catenin. Microinjection of XTcf-3 mRNA in embryos results in nuclear translocation of beta-catenin. The beta-catenin-XTcf-3 complex activates transcription in a transient reporter gene assay, while XTcf-3 by itself is silent. N-terminal deletion of XTcf-3 (delta N) abrogates the interaction with beta-catenin, as well as the consequent transcription activation. This dominant-negative delta N mutant suppresses the induction of axis duplication by microinjected beta-catenin. It also suppresses endogenous axis specification upon injection into the dorsal blastomeres of a 4-cell-stage embryo. We propose that signaling by beta-catenin involves complex formation with XTcf-3, followed by nuclear translocation and activation of specific XTcf-3 target genes.