The Role of Genetic Resources in Breeding for Climate Change: The Case of Public Breeding Programmes in Eighteen Developing Countries 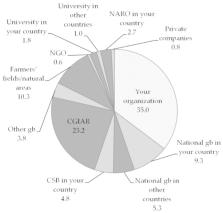 The role of plant breeding in adapting crops to climate changes that affect food production in developing countries is recognized as extremely important and urgent, alongside other agronomic, socio-economic and policy adaptation pathways. To enhance plant breeders’ capacity to respond to climate challenges, it is acknowledged that they need to be able to access and use as much genetic diversity as they can get. Through an analysis of data from a global survey, we explore if and how public breeders in selected developing countries are responding to climate challenges through a renewed or innovative use of plant genetic resources, particularly in terms of types of material incorporated into their breeding work as well as sources of such germplasm. It also looks at the possible limitations breeders encounter in their efforts towards exploring diversity for adaptation. Breeders are clearly considering climate challenges. In general, their efforts are aimed at intensifying their breeding work on traits that they were already working on before climate change was so widely discussed. Similarly, the kinds of germplasm they use, and the sources from which they obtain it, do not appear to have changed significantly over the course of recent years. The main challenges breeders faced in accessing germplasm were linked to administrative/legal factors, particularly related to obtaining genetic resources across national borders. They also underscore technical challenges such as a lack of appropriate technologies to exploit germplasm sets such as crop wild relatives and landraces. Addressing these limitations will be crucial to fully enhance the role of public sector breeders in helping to adapt vulnerable agricultural systems to the challenges of climate change.

D Lobell,  Claudia Tebaldi,  M Mastrandrea … (2008)
Investments aimed at improving agricultural adaptation to climate change inevitably favor some crops and regions over others. An analysis of climate risks for crops in 12 food-insecure regions was conducted to identify adaptation priorities, based on statistical crop models and climate projections for 2030 from 20 general circulation models. Results indicate South Asia and Southern Africa as two regions that, without sufficient adaptation measures, will likely suffer negative impacts on several crops that are important to large food-insecure human populations. We also find that uncertainties vary widely by crop, and therefore priorities will depend on the risk attitudes of investment institutions.

Richard Matear,  J Durack,  K I E M Wijffels (2012)
Fundamental thermodynamics and climate models suggest that dry regions will become drier and wet regions will become wetter in response to warming. Efforts to detect this long-term response in sparse surface observations of rainfall and evaporation remain ambiguous. We show that ocean salinity patterns express an identifiable fingerprint of an intensifying water cycle. Our 50-year observed global surface salinity changes, combined with changes from global climate models, present robust evidence of an intensified global water cycle at a rate of 8 ± 5% per degree of surface warming. This rate is double the response projected by current-generation climate models and suggests that a substantial (16 to 24%) intensification of the global water cycle will occur in a future 2° to 3° warmer world.