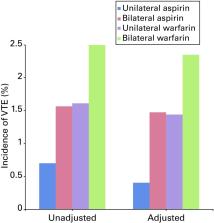 The aims of this study were to compare the efficacy of two agents, aspirin and warfarin, for the prevention of venous thromboembolism (VTE) after simultaneous bilateral total knee arthroplasty (SBTKA), and to elucidate the risk of VTE conferred by this procedure compared with unilateral TKA (UTKA).

A retrospective, multi-institutional study was conducted on 18 951 patients, 3685 who underwent SBTKA and 15 266 who underwent UTKA, using aspirin or warfarin as VTE prophylaxis. Each patient was assigned an individualised baseline VTE risk score based on a system using the Nationwide Inpatient Sample. Symptomatic VTE, including pulmonary embolism (PE) and deep vein thrombosis (DVT), were identified in the first 90 days post-operatively. Statistical analyses were performed with logistic regression accounting for baseline VTE risk.

Aspirin is more effective than warfarin for the prevention of VTE following SBTKA, and serves as the more appropriate agent for VTE prophylaxis for patients in all risk categories. Furthermore, patients undergoing SBTKA are at a substantially increased risk of VTE, even more so for those with significant underlying risk factors. Patients should be informed about the risks associated with undergoing SBTKA.

Yngve Falck-Ytter,  Charles Francis,  Norman A Johanson … (2012)
VTE is a serious, but decreasing complication following major orthopedic surgery. This guideline focuses on optimal prophylaxis to reduce postoperative pulmonary embolism and DVT. The methods of this guideline follow those described in Methodology for the Development of Antithrombotic Therapy and Prevention of Thrombosis Guidelines: Antithrombotic Therapy and Prevention of Thrombosis, 9th ed: American College of Chest Physicians Evidence-Based Clinical Practice Guidelines in this supplement. In patients undergoing major orthopedic surgery, we recommend the use of one of the following rather than no antithrombotic prophylaxis: low-molecular-weight heparin; fondaparinux; dabigatran, apixaban, rivaroxaban (total hip arthroplasty or total knee arthroplasty but not hip fracture surgery); low-dose unfractionated heparin; adjusted-dose vitamin K antagonist; aspirin (all Grade 1B); or an intermittent pneumatic compression device (IPCD) (Grade 1C) for a minimum of 10 to 14 days. We suggest the use of low-molecular-weight heparin in preference to the other agents we have recommended as alternatives (Grade 2C/2B), and in patients receiving pharmacologic prophylaxis, we suggest adding an IPCD during the hospital stay (Grade 2C). We suggest extending thromboprophylaxis for up to 35 days (Grade 2B). In patients at increased bleeding risk, we suggest an IPCD or no prophylaxis (Grade 2C). In patients who decline injections, we recommend using apixaban or dabigatran (all Grade 1B). We suggest against using inferior vena cava filter placement for primary prevention in patients with contraindications to both pharmacologic and mechanical thromboprophylaxis (Grade 2C). We recommend against Doppler (or duplex) ultrasonography screening before hospital discharge (Grade 1B). For patients with isolated lower-extremity injuries requiring leg immobilization, we suggest no thromboprophylaxis (Grade 2B). For patients undergoing knee arthroscopy without a history of VTE, we suggest no thromboprophylaxis (Grade 2B). Optimal strategies for thromboprophylaxis after major orthopedic surgery include pharmacologic and mechanical approaches.

Correspondence should be sent to J. Parvizi; email: javad.parvizi@ 123456rothmaninstitute.com