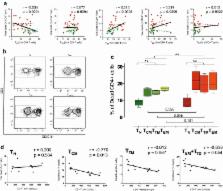 High levels of ex vivo CD4 T-cell death and the accumulation of highly differentiated and/or immunosenescent T cells have been associated with poor CD4 T-cell recovery in treated HIV-infected individuals. However, the relationship between cell death and T-cell differentiation is still unclear.

S Deeks (2010)
Although antiretroviral therapy for HIV infection prevents AIDS-related complications and prolongs life, it does not fully restore health. Long-term treated patients remain at higher than expected risk for a number of complications typically associated with aging, including cardiovascular disease, cancer, osteoporosis, and other end-organ diseases. The potential effect of HIV on health is perhaps most clearly exhibited by a number of immunologic abnormalities that persist despite effective suppression of HIV replication. These changes are consistent with some of the changes to the adaptive immune system that are seen in the very old ("immunosenescence") and that are likely related in part to persistent inflammation. HIV-associated inflammation and immunosenescence have been implicated as causally related to the premature onset of other end-organ diseases. Novel therapeutic strategies aimed at preventing or reversing these immunologic defects may be necessary if HIV-infected patients are to achieve normal life span.