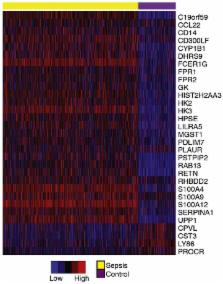 Sepsis involves aberrant immune responses to infection, but the exact nature of this immune dysfunction remains poorly defined. Bacterial endotoxins like lipopolysaccharide (LPS) are potent inducers of inflammation, which has been associated with the pathophysiology of sepsis, but repeated exposure can also induce a suppressive effect known as endotoxin tolerance or cellular reprogramming. It has been proposed that endotoxin tolerance might be associated with the immunosuppressive state that was primarily observed during late-stage sepsis. However, this relationship remains poorly characterised. Here we clarify the underlying mechanisms and timing of immune dysfunction in sepsis.

We defined a gene expression signature characteristic of endotoxin tolerance. Gene-set test approaches were used to correlate this signature with early sepsis, both newly and retrospectively analysing microarrays from 593 patients in 11 cohorts. Then we recruited a unique cohort of possible sepsis patients at first clinical presentation in an independent blinded controlled observational study to determine whether this signature was associated with the development of confirmed sepsis and organ dysfunction.

All sepsis patients presented an expression profile strongly associated with the endotoxin tolerance signature (p < 0.01; AUC 96.1%). Importantly, this signature further differentiated between suspected sepsis patients who did, or did not, go on to develop confirmed sepsis, and predicted the development of organ dysfunction.

Our data support an updated model of sepsis pathogenesis in which endotoxin tolerance-mediated immune dysfunction (cellular reprogramming) is present throughout the clinical course of disease and related to disease severity. Thus endotoxin tolerance might offer new insights guiding the development of new therapies and diagnostics for early sepsis.

Jianguo Xia, Maia Benner, Robert E. W. Hancock (2014)
Biological network analysis is a powerful approach to gain systems-level understanding of patterns of gene expression in different cell types, disease states and other biological/experimental conditions. Three consecutive steps are required - identification of genes or proteins of interest, network construction and network analysis and visualization. To date, researchers have to learn to use a combination of several tools to accomplish this task. In addition, interactive visualization of large networks has been primarily restricted to locally installed programs. To address these challenges, we have developed NetworkAnalyst, taking advantage of state-of-the-art web technologies, to enable high performance network analysis with rich user experience. NetworkAnalyst integrates all three steps and presents the results via a powerful online network visualization framework. Users can upload gene or protein lists, single or multiple gene expression datasets to perform comprehensive gene annotation and differential expression analysis. Significant genes are mapped to our manually curated protein-protein interaction database to construct relevant networks. The results are presented through standard web browsers for network analysis and interactive exploration. NetworkAnalyst supports common functions for network topology and module analyses. Users can easily search, zoom and highlight nodes or modules, as well as perform functional enrichment analysis on these selections. The networks can be customized with different layouts, colors or node sizes, and exported as PNG, PDF or GraphML files. Comprehensive FAQs, tutorials and context-based tips and instructions are provided. NetworkAnalyst currently supports protein-protein interaction network analysis for human and mouse and is freely available at http://www.networkanalyst.ca.

Gordon Otto, Maik Sossdorf, Ralf A. Claus … (2011)
Introduction Recent models capturing the pathophysiology of sepsis and ex-vivo data from patients are speculating about immunosuppression in the so-called late phase of sepsis. Clinical data regarding survival and microbiological burden are missing. The aim of this study was to determine the clinical significance of the 'late phase' of sepsis with respect to overall survival and occurrence of microbiological findings. Methods In a retrospective trial, 16,041 patient charts from a university intensive care unit were screened, and 999 patients with severe sepsis or septic shock were identified. Three phases were established according to the mortality peaks which were separated by two distinct nadirs: phase I (days 1 to 5), phase II (days 6 to 15) and phase III (days 16 to 150). Patients were analyzed for outcome, SOFA scores, procalcitonin levels, antimicrobial treatment, dialysis, mechanical ventilation and results of blood cultures during their hospital stay. Results Out of 999 enrolled patients, 308 died during the course of sepsis presenting a characteristic mortality rate (30.8%) with three distinct mortality peaks (at days 2, 7 and 17). Overall 36.7% of all deaths occurred in the early phase (phase I) and 63.3% during the later phases (phase II + III). In total 2,117 blood cultures were drawn. In phase I, 882 blood cultures were drawn, representing a sampling rate of 88% with a positive rate of 14.9%. In phase II, 461 samples were taken, indicating a sampling rate of 52% and a positive rate of 11.3%. Within phase III, 524 samples were obtained representing a sampling rate of 66% with a positive rate of 15.3%, which was significantly higher compared to the positive rate of phase II and similar to phase I. In particular, the rate of typically opportunistic bacteria increased significantly from 9% in phase I up to 18% in phase III. The same is true for Candida spp. (phase I 13%, phase III 30%). Conclusions The later phase of sepsis is associated with a significant re-increase of positive blood culture results, especially regarding opportunistic bacteria and fungi. These observations warrant further studies focusing on the underlying mechanisms resulting in this outcome burden in the later phase of sepsis.

This is an open access article under the CC BY license ( http://creativecommons.org/licenses/by/3.0/).