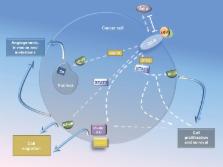 Previous reports indicate that over 13 different tumors, including hepatocellular carcinoma (HCC), are related to obesity. Obesity-associated inflammatory, metabolic, and endocrine mediators, as well as the functioning of the gut microbiota, are suspected to contribute to tumorigenesis. In obese people, proinflammatory cytokines/chemokines including tumor necrosis factor-alpha, interleukin (IL)-1 and IL-6, insulin and insulin-like growth factors, adipokines, plasminogen activator inhibitor-1, adiponectin, and leptin are found to play crucial roles in the initiation and development of cancer. The cytokines induced by leptin in adipose tissue or tumor cells have been intensely studied. Leptin-induced signaling pathways are critical for biological functions such as adiposity, energy balance, endocrine function, immune reaction, and angiogenesis as well as oncogenesis. Leptin is an activator of cell proliferation and anti-apoptosis in several cell types, and an inducer of cancer stem cells; its critical roles in tumorigenesis are based on its oncogenic, mitogenic, proinflammatory, and pro-angiogenic actions. This review provides an update of the pathological effects of leptin signaling with special emphasis on potential molecular mechanisms and therapeutic targeting, which could potentially be used in future clinical settings. In addition, leptin-induced angiogenic ability and molecular mechanisms in HCC are discussed. The stringent binding affinity of leptin and its receptor Ob-R, as well as the highly upregulated expression of both leptin and Ob-R in cancer cells compared to normal cells, makes leptin an ideal drug target for the prevention and treatment of HCC, especially in obese patients.

Identification and expression cloning of a leptin receptor, OB-R.

Louis A Tartaglia,  Marlene Dembski,  Xun Weng … (1995)
The ob gene product, leptin, is an important circulating signal for the regulation of body weight. To identify high affinity leptin-binding sites, we generated a series of leptin-alkaline phosphatase (AP) fusion proteins as well as [125I]leptin. After a binding survey of cell lines and tissues, we identified leptin-binding sites in the mouse choroid plexus. A cDNA expression library was prepared from mouse choroid plexus and screened with a leptin-AP fusion protein to identify a leptin receptor (OB-R). OB-R is a single membrane-spanning receptor most related to the gp130 signal-transducing component of the IL-6 receptor, the G-CSF receptor, and the LIF receptor. OB-R mRNA is expressed not only in choroid plexus, but also in several other tissues, including hypothalamus. Genetic mapping of the gene encoding OB-R shows that it is within the 5.1 cM interval of mouse chromosome 4 that contains the db locus.

Obesity as a Major Risk Factor for Cancer

Giovanni De Pergola,  Franco Silvestris (2013)
The number of cancer cases caused by being obese is estimated to be 20% with the increased risk of malignancies being influenced by diet, weight change, and body fat distribution together with physical activity. Reports from the International Agency for Research into Cancer and the World Cancer Research Fund (WCRF) have shown that the strongest evidence exists for an association of obesity with the following cancer types: endometrial, esophageal adenocarcinoma, colorectal, postmenopausal breast, prostate, and renal, whereas the less common malignancies are leukemia, non-Hodgkin's lymphoma, multiple myeloma, malignant melanoma, and thyroid tumours. To be able to develop novel methods in prevention and treatment, we first must understand the underlying processes which link cancer to obesity. Four main systems have been identified as potential producers of cancer in obesity: insulin, insulin-like growth factor-I, sex steroids, and adipokines. Various novel candidate mechanisms have been proposed: chronic inflammation, oxidative stress, crosstalk between tumour cells and surrounding adipocytes, migrating adipose stromal cells, obesity-induced hypoxia, shared genetic susceptibility, and the functional defeat of immune function. Herein, we review the major pathogenic links between obesity and susceptibility to cancer.

Gema Frühbeck (2006)
Leptin is a versatile 16 kDa peptide hormone, with a tertiary structure resembling that of members of the long-chain helical cytokine family. It is mainly produced by adipocytes in proportion to fat size stores, and was originally thought to act only as a satiety factor. However, the ubiquitous distribution of OB-R leptin receptors in almost all tissues underlies the pleiotropism of leptin. OB-Rs belong to the class I cytokine receptor family, which is known to act through JAKs (Janus kinases) and STATs (signal transducers and activators of transcription). The OB-R gene is alternatively spliced to produce at least five isoforms. The full-length isoform, OB-Rb, contains intracellular motifs required for activation of the JAK/STAT signal transduction pathway, and is considered to be the functional receptor. Considerable evidence for systemic effects of leptin on body mass control, reproduction, angiogenesis, immunity, wound healing, bone remodelling and cardiovascular function, as well as on specific metabolic pathways, indicates that leptin operates both directly and indirectly to orchestrate complex pathophysiological processes. Consistent with leptin's pleiotropic role, its participation in and crosstalk with some of the main signalling pathways, including those involving insulin receptor substrates, phosphoinositide 3-kinase, protein kinase B, protein kinase C, extracellular-signal-regulated kinase, mitogen-activated protein kinases, phosphodiesterase, phospholipase C and nitric oxide, has been observed. The impact of leptin on several equally relevant signalling pathways extends also to Rho family GTPases in relation to the actin cytoskeleton, production of reactive oxygen species, stimulation of prostaglandins, binding to diacylglycerol kinase and catecholamine secretion, among others.