Preservation of myocardial contractile function by aminoguanidine, a nitric oxide synthase inhibitors, in a rat model of hemorrhagic shock 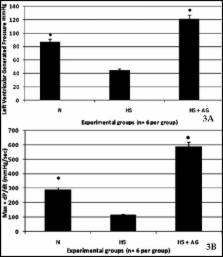 Background: Myocardial contractile dysfunction plays a major role in the outcome of trauma patients. Nitric oxide (NO) has been shown to increase following haemorrhagic shock. Peroxynitrite which is produced by the reaction of NO with reactive oxygen species leads to nitrosative stress mediated organ injury and myocardial contractile dysfunction. Aminoguanidine is a selective inhibitor of inducible nitric oxide synthase (iNOS).

Objectives: The aim of this study was to determine the protective effects of inhibiting the production of NO using aminoguanidine (AG) on myocardial contractility, following hemorrhagic shock and resuscitation in rats.

J L Haenel,  Samantha F. Moore,  A Sauaia … (1996)
To better define the epidemiology of postinjury multiple organ failure (MOF), we prospectively evaluated 457 high-risk trauma patients who survived more than 48 hours. Overall, 70 (15%) developed MOF. In 27 (39%) patients, the occurrence was early, while in 43 (61%) patients the presentation was delayed. At presentation, early MOF had more cardiac dysfunction, while late MOF had greater hepatic failure. Indices of shock were more critical risk factors for early MOF, while advanced age was more important for late MOF. While early and late MOF had a similar high incidence of major infections, these appeared to be more important in precipitating late MOF. Finally, while mortality is similar, early MOF patients appear to succumb faster. In conclusion, postinjury MOF remains a significant challenge and appears to present in at least two patterns (i.e., early versus late). Better understanding of the relative roles of the dysfunctional inflammation and infections in early MOF versus late MOF may facilitate the development of new strategies for the prevention and treatment of morbid syndrome.

Vascular hyporeactivity to vasoconstrictor agents and hemodynamic decompensation in hemorrhagic shock is mediated by nitric oxide.

C Thiemermann,  C. Ákos Szabó,  J R Vane … (1993)
This study investigates the role of nitric oxide (NO) and the induction of a calcium-independent NO synthase (NOS) in development of vascular hyporeactivity to norepinephrine (NE) and vascular decompensation associated with hemorrhagic shock (HS) in the anesthetized rat. HS for 120 min caused a time-dependent reduction of the pressor responses to NE. This hyporeactivity is mediated by an enhanced release of NO by the constitutive NOS, for it was reversed by NG-nitro-L-arginine methyl ester (NO2Arg), an inhibitor of both constitutive and inducible NOS, but it was not prevented by dexamethasone, an inhibitor of NOS induction. Vascular decompensation following prolonged periods of HS was characterized by a failure of control animals to maintain arterial blood pressures despite reinfusion of blood. This progressive decrease in blood pressure is mediated by enhanced formation of NO by the inducible NOS, for it was prevented by NO2Arg or dexamethasone. A strong increase in calcium-independent (inducible) NOS activity was observed in several organs after 150 and 330 min of HS, being most pronounced in lung, liver, and spleen. HS for 330, but not 150, min also caused hyporeactivity of rat aortic rings to vasoconstrictors, which was associated with induction of calcium-independent NOS activity in this tissue. Aortic hyporeactivity was prevented by dexamethasone pretreatment in vivo and reversed by NO2Arg in vitro. HS was not associated with an increase in plasma endotoxin levels, showing that endotoxin does not account for induction of NOS in this model. Thus, excessive NO formation induces vascular hyporeactivity and decompensation in HS, indicating that NOS inhibitors, particularly of the inducible NOS, may improve the therapeutic outcome of patients suffering from HS.

Michael C Wu,  C. Ákos Szabó,  J R Vane … (1995)
1. We have investigated the effects of aminoguanidine, a relatively selective inhibitor of the cytokine-inducible isoform of nitric oxide synthase (iNOS), on the delayed circulatory failure, vascular hyporeactivity to vasoconstrictor agents, and iNOS activity in a rat model of circulatory shock induced by bacterial endotoxin (E. coli lipopolysaccharide; LPS). In addition, we have evaluated the effect of aminoguanidine on the 24 h survival rate in a murine model of endotoxaemia. 2. Male Wistar rats were anaesthetized and instrumented for the measurement of mean arterial blood pressure (MAP) and heart rate (HR). Injection of LPS (10 mg kg-1, i.v.) resulted in a fall in MAP from 115 +/- 4 mmHg (time 0, control) to 79 +/- 9 mmHg at 180 min (P 0.05). In contrast,aminoguanidine was a less potent inhibitor than L-NAME of the constitutive nitric oxide synthase in rat brain homogenates (n = 3-6, IC50 is 140 +/- 10 and 0.6 +/- 0.1 I1M, respectively, P<0.05). In addition, the inhibitory effect of aminoguanidine on iNOS activity showed a slower onset than that of L-NAME(maximal inhibition at 90 min and 30 min, respectively).5. Treatment of conscious Swiss albino (T/O) mice with a high dose of endotoxin (60 mg kg-1, i.p.)resulted in a survival rate of only 8% at 24 h (n = 12). However, therapeutic application of aminoguanidine (15 mg kg-1, i.p. at 2 h and 6 h after LPS) increased the 24 h survival rate to 75%(n = 8), whereas L-NAME (3 mg kg-1, i.p. at 2 h and 6 h after LPS) did not affect the survival rate(11%, n=9).6 Thus, aminoguanidine inhibits iNOS activity and attenuates the delayed circulatory failure caused by endotoxic shock in the rat and improves survival in a murine model of endotoxaemia. Aminoguanidine,or novel, more potent selective inhibitors of iNOS may be useful in the therapy of septic shock.