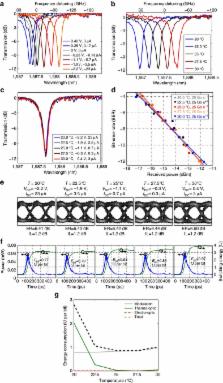 Silicon photonics has emerged as the leading candidate for implementing ultralow power wavelength–division–multiplexed communication networks in high-performance computers, yet current components (lasers, modulators, filters and detectors) consume too much power for the high-speed femtojoule-class links that ultimately will be required. Here we demonstrate and characterize the first modulator to achieve simultaneous high-speed (25 Gb s −1), low-voltage (0.5  V PP) and efficient 0.9 fJ per bit error-free operation. This low-energy high-speed operation is enabled by a record electro-optic response, obtained in a vertical p –n junction device that at 250 pm V −1 (30 GHz V −1) is up to 10 times larger than prior demonstrations. In addition, this record electro-optic response is used to compensate for thermal drift over a 7.5 °C temperature range with little additional energy consumption (0.24 fJ per bit for a total energy consumption below 1.03 J per bit). The combined results of highly efficient modulation and electro-optic thermal compensation represent a new paradigm in modulator development and a major step towards single-digit femtojoule-class communications. 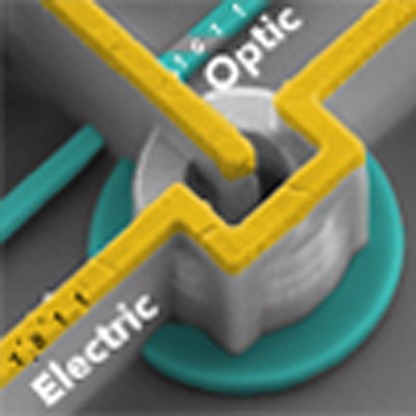 Optical modulators on silicon promise to deliver ultralow power communication networks between or within computer chips. Here, the authors demonstrate a silicon modulator operating with less than one femtojoule energy and are able to compensate for thermal drift over a 7.5 °C temperature range.

Michal Lipson,  Sameer L Pradhan,  Qianfan Xu … (2005)
Metal interconnections are expected to become the limiting factor for the performance of electronic systems as transistors continue to shrink in size. Replacing them by optical interconnections, at different levels ranging from rack-to-rack down to chip-to-chip and intra-chip interconnections, could provide the low power dissipation, low latencies and high bandwidths that are needed. The implementation of optical interconnections relies on the development of micro-optical devices that are integrated with the microelectronics on chips. Recent demonstrations of silicon low-loss waveguides, light emitters, amplifiers and lasers approach this goal, but a small silicon electro-optic modulator with a size small enough for chip-scale integration has not yet been demonstrated. Here we experimentally demonstrate a high-speed electro-optical modulator in compact silicon structures. The modulator is based on a resonant light-confining structure that enhances the sensitivity of light to small changes in refractive index of the silicon and also enables high-speed operation. The modulator is 12 micrometres in diameter, three orders of magnitude smaller than previously demonstrated. Electro-optic modulators are one of the most critical components in optoelectronic integration, and decreasing their size may enable novel chip architectures.

A high-speed silicon optical modulator based on a metal-oxide-semiconductor capacitor.

Katerina D. Samara,  Remus Nicolaescu,  Sui-Ling Liao … (2004)
Silicon has long been the optimal material for electronics, but it is only relatively recently that it has been considered as a material option for photonics. One of the key limitations for using silicon as a photonic material has been the relatively low speed of silicon optical modulators compared to those fabricated from III-V semiconductor compounds and/or electro-optic materials such as lithium niobate. To date, the fastest silicon-waveguide-based optical modulator that has been demonstrated experimentally has a modulation frequency of only approximately 20 MHz (refs 10, 11), although it has been predicted theoretically that a approximately 1-GHz modulation frequency might be achievable in some device structures. Here we describe an approach based on a metal-oxide-semiconductor (MOS) capacitor structure embedded in a silicon waveguide that can produce high-speed optical phase modulation: we demonstrate an all-silicon optical modulator with a modulation bandwidth exceeding 1 GHz. As this technology is compatible with conventional complementary MOS (CMOS) processing, monolithic integration of the silicon modulator with advanced electronics on a single silicon substrate becomes possible.

Reuben Harris,  Daniel E. Roth,  Justin Miller … (2005)
Silicon is the dominant semiconductor for electronics, but there is now a growing need to integrate such components with optoelectronics for telecommunications and computer interconnections. Silicon-based optical modulators have recently been successfully demonstrated; but because the light modulation mechanisms in silicon are relatively weak, long (for example, several millimetres) devices or sophisticated high-quality-factor resonators have been necessary. Thin quantum-well structures made from III-V semiconductors such as GaAs, InP and their alloys exhibit the much stronger quantum-confined Stark effect (QCSE) mechanism, which allows modulator structures with only micrometres of optical path length. Such III-V materials are unfortunately difficult to integrate with silicon electronic devices. Germanium is routinely integrated with silicon in electronics, but previous silicon-germanium structures have also not shown strong modulation effects. Here we report the discovery of the QCSE, at room temperature, in thin germanium quantum-well structures grown on silicon. The QCSE here has strengths comparable to that in III-V materials. Its clarity and strength are particularly surprising because germanium is an indirect gap semiconductor; such semiconductors often display much weaker optical effects than direct gap materials (such as the III-V materials typically used for optoelectronics). This discovery is very promising for small, high-speed, low-power optical output devices fully compatible with silicon electronics manufacture.