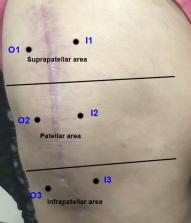 Chronic post-surgical pain (CPSP) is a detrimental condition that persists at least two months after surgical procedures and seriously affects patients’ quality of life. Although its incidence varies according to operation types and definitions, its prevalence is between 3% and 85%. The purpose of this study is to evaluate the prevalence of CPSP and neuropathic pain in patients undergoing TKA for osteoarthritis.

In this study, patients who had undergone total knee arthroplasty (TKA) were examined prospectively and observationally. 42 patients were included in the study. Numeric rate scale (NRS) for developing chronic pain, Douleur Neuropathique 4 (DN-4) questionnaire to evaluate neuropathic pain and symptoms, and von Frey filaments to evaluate mechanical hyperesthesia and alladony.

NRS scores were 1 or higher for all patients. Twenty-seven patients constituted the mild pain group (NRS: 1–4), and 15 patients constituted the moderate pain group (NRS: 4–7). The number of patients defined as having “neuropathic pain,” according to DN-4 scores, was 17 (40.4%; DN-4 ≥ 4). The moderate pain group reported greater severity of neuropathic symptoms on average than the mild pain group (p = 0.039). When patients knees affected by TKA were divided into suprapatellar, patellar, and infrapatellar regions and evaluated with von Frey filaments, a significant difference was found between the three regions (p < 0.05).

In this study, we showed—unlike other studies—that the rate of neuropathic pain was higher among CPSP patients, and all patients had neuropathic symptoms. In evaluating patients knees with von Frey filaments, we showed that the neuropathic component of patients’ pain occurred mostly in the knee’s infrapatellar region. Although the incidence of CPSP and neuropathic pain in these patients was higher than expected, we think CPSP, its diagnosis, and its treatment present an important issue that requires further examination.

Ellen Katz,  Erick J. Paul,  R Croxford … (1998)
A cross-sectional, community-based survey of a random sample of 1750 of 242,311 Medicare recipients was performed. The patients were at least sixty-five years old and had had a primary or revision knee replacement (either unilaterally or bilaterally) between 1985 and 1989. Three samples were surveyed separately: a national sample (to reflect the United States as a whole) and samples from Indiana and the western part of Pennsylvania (sites chosen for convenience to assess the validity of the findings for the national sample on a regional level). Each sample was stratified by race, age, residence (urban or rural), and the year of the procedure. Valid and reliable questionnaires were used to elicit the participants' assessments of pain, physical function, and satisfaction two to seven years after the knee replacement. Of the 1486 patients who were eligible for inclusion in the survey, 1193 (80.3 per cent) responded. The mean age of the respondents was 72.6 years. Eight hundred and forty-nine respondents (71.2 per cent) were white, and 849 (71.2 per cent) were women. The participants reported that they had little or no pain in the knee at the time of the survey, regardless of the age at the time of the knee replacement, the body-mass index, or the length of time since the knee replacement. After adjustment for potential confounding variables, predictors of better physical function after the replacement were an absence of problems with the contralateral knee, primary knee replacement (rather than revision) (Indiana sample only), and a lower body-mass index (Indiana and western Pennsylvania samples). Four hundred and fifteen (85.2 per cent) of the 487 patients in the national sample were satisfied with the result of the knee replacement. In what we believe to be the first community-based study of the outcome of knee replacement, patients reported having significant (p = 0.0001) and persistent relief of pain, improved physical function, and satisfaction with the result two to seven years postoperatively. The findings of the present study suggest that age and obesity do not have a negative impact on patient-relevant outcomes (pain and physical function). Dissemination of these findings has the potential to increase appropriate referrals for knee replacement and thereby reduce the pain and functional disability due to osteoarthrosis of the knee.

Paul Jensen,  Clifford Woolf,  Henrik Kehlet (2006)
Acute postoperative pain is followed by persistent pain in 10-50% of individuals after common operations, such as groin hernia repair, breast and thoracic surgery, leg amputation, and coronary artery bypass surgery. Since chronic pain can be severe in about 2-10% of these patients, persistent postsurgical pain represents a major, largely unrecognised clinical problem. Iatrogenic neuropathic pain is probably the most important cause of long-term postsurgical pain. Consequently, surgical techniques that avoid nerve damage should be applied whenever possible. Also, the effect of aggressive, early therapy for postoperative pain should be investigated, since the intensity of acute postoperative pain correlates with the risk of developing a persistent pain state. Finally, the role of genetic factors should be studied, since only a proportion of patients with intraoperative nerve damage develop chronic pain. Based on information about the molecular mechanisms that affect changes to the peripheral and central nervous system in neuropathic pain, several opportunities exist for multimodal pharmacological intervention. Here, we outline strategies for identification of patients at risk and for prevention and possible treatment of this important entity of chronic pain.