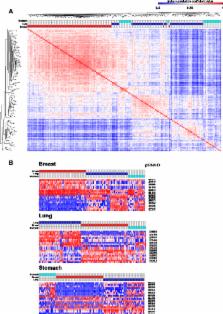 PIWI-interacting RNAs (piRNAs) are emerging players in cancer genomics. Originally described in the germline, there are over 20,000 piRNA genes in the human genome. In contrast to microRNAs, piRNAs interact with PIWI proteins, another member of the Argonaute family, and function primarily in the nucleus. There, they are involved in the epigenetic silencing of transposable elements in addition to the transcriptional regulation of genes. It has recently been demonstrated that piRNAs are also expressed across a variety of human somatic tissue types in a tissue-specific manner. An increasing number of studies have shown that aberrant piRNA expression is a signature feature across multiple tumour types; however, their specific tumorigenic functions remain unclear. In this article, we discuss the emerging functional roles of piRNAs in a variety of cancers, and highlight their potential clinical utilities.

Iakes Ezkurdia (2013)
Summary The human genome encodes the blueprint of life, but the function of the vast majority of its nearly three billion bases is unknown. The Encyclopedia of DNA Elements (ENCODE) project has systematically mapped regions of transcription, transcription factor association, chromatin structure, and histone modification. These data enabled us to assign biochemical functions for 80% of the genome, in particular outside of the well-studied protein-coding regions. Many discovered candidate regulatory elements are physically associated with one another and with expressed genes, providing new insights into the mechanisms of gene regulation. The newly identified elements also show a statistical correspondence to sequence variants linked to human disease, and can thereby guide interpretation of this variation. Overall the project provides new insights into the organization and regulation of our genes and genome, and an expansive resource of functional annotations for biomedical research.

Ana Kozomara,  Sam Griffiths-Jones (2013)
We describe an update of the miRBase database (http://www.mirbase.org/), the primary microRNA sequence repository. The latest miRBase release (v20, June 2013) contains 24 521 microRNA loci from 206 species, processed to produce 30 424 mature microRNA products. The rate of deposition of novel microRNAs and the number of researchers involved in their discovery continue to increase, driven largely by small RNA deep sequencing experiments. In the face of these increases, and a range of microRNA annotation methods and criteria, maintaining the quality of the microRNA sequence data set is a significant challenge. Here, we describe recent developments of the miRBase database to address this issue. In particular, we describe the collation and use of deep sequencing data sets to assign levels of confidence to miRBase entries. We now provide a high confidence subset of miRBase entries, based on the pattern of mapped reads. The high confidence microRNA data set is available alongside the complete microRNA collection at http://www.mirbase.org/. We also describe embedding microRNA-specific Wikipedia pages on the miRBase website to encourage the microRNA community to contribute and share textual and functional information.

Stefano Volinia,  George A. Calin,  Chang-Gong Liu … (2006)
Small noncoding microRNAs (miRNAs) can contribute to cancer development and progression and are differentially expressed in normal tissues and cancers. From a large-scale miRnome analysis on 540 samples including lung, breast, stomach, prostate, colon, and pancreatic tumors, we identified a solid cancer miRNA signature composed by a large portion of overexpressed miRNAs. Among these miRNAs are some with well characterized cancer association, such as miR-17-5p, miR-20a, miR-21, miR-92, miR-106a, and miR-155. The predicted targets for the differentially expressed miRNAs are significantly enriched for protein-coding tumor suppressors and oncogenes (P < 0.0001). A number of the predicted targets, including the tumor suppressors RB1 (Retinoblastoma 1) and TGFBR2 (transforming growth factor, beta receptor II) genes were confirmed experimentally. Our results indicate that miRNAs are extensively involved in cancer pathogenesis of solid tumors and support their function as either dominant or recessive cancer genes.