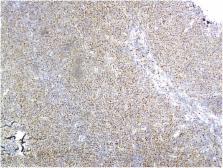 We report the case of a 58-year-old Sri Lankan man who presented with gross hematuria. Further investigation revealed bicytopenia with splenomegaly and elevated serum creatinine. He had a renal biopsy, which revealed acute immune complex glomerulonephritis with interstitial inflammation. Results from an initial bone marrow biopsy and blood imaging were inconclusive. Three months later his renal function had deteriorated and a lymph node biopsy revealed mantle cell lymphoma. Within three months of initiating chemotherapy, his renal function returned to normal levels and remained normal at one year of follow-up.

It is important to have a high degree of suspicion when patients present with acute immune complex glomerulonephritis with no other identifiable cause, because it could be the first presentation of a non-Hodgkin lymphoma such as mantle cell lymphoma.

Kate Shankland,  James Armitage,  Barry W Hancock (2012)
Lymphomas are solid tumours of the immune system. Hodgkin's lymphoma accounts for about 10% of all lymphomas, and the remaining 90% are referred to as non-Hodgkin lymphoma. Non-Hodgkin lymphomas have a wide range of histological appearances and clinical features at presentation, which can make diagnosis difficult. Lymphomas are not rare, and most physicians, irrespective of their specialty, will probably have come across a patient with lymphoma. Timely diagnosis is important because effective, and often curative, therapies are available for many subtypes. In this Seminar we discuss advances in the understanding of the biology of these malignancies and new, available treatments. Copyright © 2012 Elsevier Ltd. All rights reserved.

Mantle cell lymphoma: biology, pathogenesis, and the molecular basis of treatment in the genomic era.

Adrian Wiestner,  Patricia Perez-Borges,  Martin Dreyling (2011)
Mantle cell lymphoma (MCL) is a B-cell non-Hodgkin lymphoma of which at least a subset arises from antigen-experienced B cells. However, what role antigen stimulation plays in its pathogenesis remains ill defined. The genetic hallmark is the chromosomal translocation t(11;14) resulting in aberrant expression of cyclin D1. Secondary genetic events increase the oncogenic potential of cyclin D1 and frequently inactivate DNA damage response pathways. In combination these changes drive cell-cycle progression and give rise to pronounced genetic instability. Several signaling pathways contribute to MCL pathogenesis, including the often constitutively activated PI3K/AKT/mTOR pathway, which promotes tumor proliferation and survival. WNT, Hedgehog, and NF-κB pathways also appear to be important. Although MCL typically responds to frontline chemotherapy, it remains incurable with standard approaches. Proteasome inhibitors (bortezomib), mTOR inhibitors (temsirolimus), and immunomodulatory drugs (lenalidomide) have recently been added to the treatment options in MCL. The molecular basis for the antitumor activity of these agents is an area of intense study that hopefully will lead to further improvements in the near future. Given its unique biology, relative rarity, and the difficulty in achieving long-lasting remissions with conventional approaches, patients with MCL should be encouraged to participate in clinical trials.