A subgraph isomorphism algorithm and its application to biochemical data 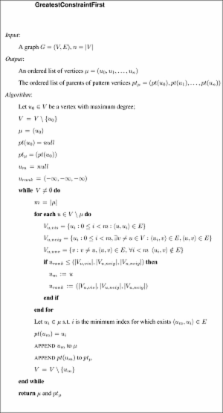 Graphs can represent biological networks at the molecular, protein, or species level. An important query is to find all matches of a pattern graph to a target graph. Accomplishing this is inherently difficult (NP-complete) and the efficiency of heuristic algorithms for the problem may depend upon the input graphs. The common aim of existing algorithms is to eliminate unsuccessful mappings as early as and as inexpensively as possible.

We propose a new subgraph isomorphism algorithm which applies a search strategy to significantly reduce the search space without using any complex pruning rules or domain reduction procedures. We compare our method with the most recent and efficient subgraph isomorphism algorithms (VFlib, LAD, and our C++ implementation of FocusSearch which was originally distributed in Modula2) on synthetic, molecules, and interaction networks data. We show a significant reduction in the running time of our approach compared with these other excellent methods and show that our algorithm scales well as memory demands increase.

Subgraph isomorphism algorithms are intensively used by biochemical tools. Our analysis gives a comprehensive comparison of different software approaches to subgraph isomorphism highlighting their weaknesses and strengths. This will help researchers make a rational choice among methods depending on their application. We also distribute an open-source package including our system and our own C++ implementation of FocusSearch together with all the used datasets ( http://ferrolab.dmi.unict.it/ri.html). In future work, our findings may be extended to approximate subgraph isomorphism algorithms.

An Algorithm for Subgraph Isomorphism

Sebastian Wernicke,  Florian Rasche (2006)
Motifs are small connected subnetworks that a network displays in significantly higher frequencies than would be expected for a random network. They have recently gathered much attention as a concept to uncover structural design principles of complex biological networks. FANMOD is a tool for fast network motif detection; it relies on recently developed algorithms to improve the efficiency of network motif detection by some orders of magnitude over existing tools. This facilitates the detection of larger motifs in bigger networks than previously possible. Additional benefits of FANMOD are the ability to analyze colored networks, a graphical user interface and the ability to export results to a variety of machine- and human-readable file formats including comma-separated values and HTML.

Pasquale Foggia,  C Sansone,  Luigi Cordella … (2004)
We present an algorithm for graph isomorphism and subgraph isomorphism suited for dealing with large graphs. A first version of the algorithm has been presented in a previous paper, where we examined its performance for the isomorphism of small and medium size graphs. The algorithm is improved here to reduce its spatial complexity and to achieve a better performance on large graphs; its features are analyzed in detail with special reference to time and memory requirements. The results of a testing performed on a publicly available database of synthetically generated graphs and on graphs relative to a real application dealing with technical drawings are presented, confirming the effectiveness of the approach, especially when working with large graphs.