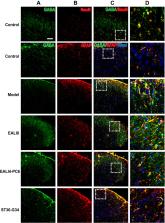 Acupuncture has shown to be effective in relieving post-surgical pain. Nonetheless, its underlying mechanisms remain largely unknown. In the present study, we investigated the effect of electroacupuncture (EA) on the expression of GABA, GABA-A receptor (R) and GABA-BR in the spinal cord dorsal horns (DHs), and the involved neural cells in rats with incisional neck pain.

Male SD rats were randomly divided into control, model, Futu (LI18), Hegu-Neiguan (LI4-PC6), and Zusanli-Yanglingquan (ST36-GB34) groups. The incisional neck pain model was established by making a longitudinal incision and repeated mechanical separation along the thyroid gland region. EA (2Hz/100Hz, 1mA) was applied to LI18, LI4-PC6, ST36-GB34 separately for 30min, once at 4, 24 and 48h after incision. The local thermal pain threshold (TPT) of the focus was measured and the expression of GABA, and GABAR proteins and mRNAs detected by immunofluorescence stain and quantitative RT-PCR, respectively.

The analgesic effect of LI18 and LI4-PC6 was superior to that of ST36-GB34 in incisional neck pain rats. Moreover, the EA stimulation of LI18 or LI4-PC6 increased the expression of GABA and GABA-Aα2 and GABA-Aβ3, GABA-B1, and GABA-B2 mRNAs in spinal DHs 4h after surgery, while GABA-A and GABA-B antagonists inhibited the analgesic effect of LI18. Immunofluorescence double staining showed that GABA was expressed on astrocytes and neurons, and GABA-B expressed only on neurons.

EA of both LI18 and LI4-PC6 has a good analgesic effect in incisional neck pain rats, which is closely related to their effects in upregulating the expression of GABA and its receptors in spinal DHs. The effects of LI18 and LI4-PC6 EA are obviously better that those of ST36-GB34 EA, and GABA is expressed on neurons and astrocytes.

The Efficacy of Acupuncture in Post-Operative Pain Management: A Systematic Review and Meta-Analysis

Ming-Shun Wu,  Kee-Hsin Chen,  I-Fan Chen … (2016)
Background Postoperative pain resulting from surgical trauma is a significant challenge for healthcare providers. Opioid analgesics are commonly used to treat postoperative pain; however, these drugs are associated with a number of undesirable side effects. Objective This systematic review and meta-analysis evaluated the effectiveness of acupuncture and acupuncture-related techniques in treating postoperative pain. Data Source MEDLINE, Cochrane Library, and EMBASE databases were searched until Sep 30, 2014. Study Eligibility Criteria Randomized controlled trials of adult subjects (≥ 18 years) who had undergone surgery and who had received acupuncture, electroacupuncture, or acupoint electrical stimulation for managing acute post-operative pain were included. Results We found that patients treated with acupuncture or related techniques had less pain and used less opioid analgesics on Day 1 after surgery compared with those treated with control (P < 0.001). Sensitivity analysis using the leave-one-out approach indicated the findings are reliable and are not dependent on any one study. In addition, no publication bias was detected. Subgroup analysis indicated that conventional acupuncture and transcutaneous electric acupoint stimulation (TEAS) were associated with less postoperative pain one day following surgery than control treatment, while electroacupuncture was similar to control (P = 0.116). TEAS was associated with significantly greater reduction in opioid analgesic use on Day 1 post surgery than control (P < 0.001); however conventional acupuncture and electroacupuncture showed no benefit in reducing opioid analgesic use compared with control (P ≥ 0.142). Conclusion Our findings indicate that certain modes of acupuncture improved postoperative pain on the first day after surgery and reduced opioid use. Our findings support the use of acupuncture as adjuvant therapy in treating postoperative pain.

JoséM. Castro-Lopes,  Isaura Tavares,  António Paulo Coimbra (1993)
A significant fall in the number of GABA-immunoreactive cells in laminae I-III of the rat spinal cord occurred in the somatotopic area of projection of the sciatic nerve after nerve transection. The decrease started at 2 weeks post-neurectomy, and at 4 weeks ipsilateral mean cell numbers were approximately 72% of contralateral control values. Similarly, the concentration of GABA in spinal homogenates was significantly reduced 4 weeks post-neurectomy. These data, together with our recent finding of an increase in spinal GABA during chronic inflammation of the hindlimb, suggest that the level of GABA in the dorsal horn is regulated by the amount of primary afferent input.