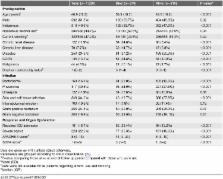 Sepsis is a leading cause of death in intensive care units and is increasing in incidence. Current trials of novel therapeutic approaches for sepsis focus on 28-day mortality as the primary outcome measure, but excess mortality may extend well beyond this time period.

We used relative survival analysis to examine excess mortality in a cohort of 1,028 patients admitted to a tertiary referral hospital with sepsis during 2007–2008, over the first 5 years of follow up. Expected survival was estimated using the Ederer II method, using Australian life tables as the reference population. Cumulative and interval specific relative survival were estimated by age group, sex, sepsis severity and Indigenous status.

Patients were followed for a median of 4.5 years (range 0–5.2). Of the 1028 patients, the mean age was 46.9 years, 52% were male, 228 (22.2%) had severe sepsis and 218 (21%) died during the follow up period. Mortality based on cumulative relative survival exceeded that of the reference population for the first 2 years post admission in the whole cohort and for the first 3 years in the subgroup with severe sepsis. Independent predictors of mortality over the whole follow up period were male sex, Indigenous Australian ethnicity, older age, higher Charlson Comorbidity Index, and sepsis-related organ dysfunction at presentation.

The mortality rate of patients hospitalised with sepsis exceeds that of the general population until 2 years post admission. Efforts to improve outcomes from sepsis should examine longer term outcomes than the traditional primary endpoints of 28-day and 90-day mortality.

Julian P J Halcox, William H Schenke, Gloria Zalos … (2002)
Whether patients at increased risk can be identified from a relatively low-risk population by coronary vascular function testing remains unknown. We investigated the relationship between coronary endothelial function and the occurrence of acute unpredictable cardiovascular events (cardiovascular death, myocardial infarction, stroke, and unstable angina) in patients with and without coronary atherosclerosis (CAD). We measured the change in coronary vascular resistance (DeltaCVR) and epicardial diameter with intracoronary acetylcholine (ACh, 15 micro g/min) to test endothelium-dependent function and sodium nitroprusside (20 micro g/min) and adenosine (2.2 mg/min) to test endothelium-independent vascular function in 308 patients undergoing cardiac catheterization (132 with and 176 without CAD). Patients underwent clinical follow-up for a mean of 46+/-3 months. Acute vascular events occurred in 35 patients. After multivariate analysis that included CAD and conventional risk factors for atherosclerosis, DeltaCVR with ACh (P=0.02) and epicardial constriction with ACh (P=0.003), together with increasing age, CAD, and body mass index, were independent predictors of adverse events. Thus, patients in the tertile with the best microvascular responses with ACh and those with epicardial dilation with ACh had improved survival by Kaplan-Meier analyses in the total population, as did those in the subset without CAD. Similar improvement in survival was also observed when all adverse events, including revascularization, were considered. Endothelium-independent responses were not predictive of outcome. Epicardial and microvascular coronary endothelial dysfunction independently predict acute cardiovascular events in patients with and without CAD, providing both functional and prognostic information that complements angiographic and risk factor assessment.

Long-term mortality and quality of life in sepsis: a systematic review.

Bradford D Winters, Michael Eberlein, Janice Leung … (2010)
Long-term outcomes from sepsis are poorly understood, and sepsis in patients may have different long-term effects on mortality and quality of life. Long-term outcome studies of other critical illnesses such as acute lung injury have demonstrated incremental health effects that persist after hospital discharge. Whether patients with sepsis have similar long-term mortality and quality-of-life effects is unclear. We performed a systematic review of studies reporting long-term mortality and quality-of-life data (>3 months) in patients with sepsis, severe sepsis, and septic shock using defined search criteria. Systematic review of the literature. None. Patients with sepsis showed ongoing mortality up to 2 yrs and beyond after the standard 28-day inhospital mortality end point. Patients with sepsis also had decrements in quality-of-life measures after hospital discharge. Results were consistent across varying severity of illness and different patient populations in different countries, including large and small studies. In addition, these results were consistent within observational and randomized, controlled trials. Study quality was limited by inadequate control groups and poor adjustment for confounding variables. Patients with sepsis have ongoing mortality beyond short-term end points, and survivors consistently demonstrate impaired quality of life. The use of 28-day mortality as an end point for clinical studies may lead to inaccurate inferences. Both observational and interventional future studies should include longer-term end points to better-understand the natural history of sepsis and the effect of interventions on patient morbidities.

Sepsis incidence and outcome: contrasting the intensive care unit with the hospital ward.

R D Luna, Oscar Peñuelas, Federico Gordo … (2007)
To describe the outcome of patients with sepsis according to location on a ward or in an intensive care unit. Prospective multicentered observational study. Three academic hospitals in Madrid, Spain. Consecutive patients with sepsis admitted to participating hospitals from March 1 to June 30, 2003. None. During the study period, 15,852 patients >18 yrs of age were admitted. Sepsis was identified in 702 patients, giving an estimated cumulative incidence rate of 367 cases per 100,000 adult area residents per year and a cumulative incidence rate among patients admitted to the hospital of 4.4%. Most septic patients had a community-acquired infection (71%). Severe sepsis developed in 199 patients (incidence rate, 104 cases per 100,000 adult area residents per year), and 59 patients developed septic shock (incidence rate, 31 cases per 100,000 adult area residents per year). Most of the patients met the criteria for severe sepsis or septic shock on the same day that they would have qualified for the septic status one step down the scale. In the other patients, the median time between sepsis and severe sepsis was 2 days (interquartile range, 2-5) and between severe sepsis and septic shock was 3 days (interquartile range, 1-4). Only 32% of severe sepsis patients received intensive care. The hospital mortality for all septic patients was 12.8%; for severe sepsis, 20.7%; and for septic shock, 45.7%. This study shows the high incidence of sepsis in a general population of patients admitted to hospital. A significant proportion of patients with severe sepsis are not transferred to the intensive care unit.

The study was supported by the National Health and Medical Research Council: Early Career Fellowship # 1013411 to JSD and Practitioner Fellowship(1042072) and Program Grant (496600) to NMA. VH was supported by University Postgraduate Research Scholarship from Charles Darwin University. The funders had no role in study design, data collection and analysis, decision to publish, or preparation of the manuscript.