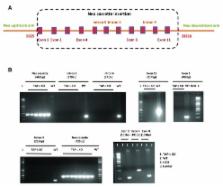 In this article, we describe the surprising non-specific reactivity in immunoblots of a rabbit polyclonal antibody (ref. Abcam 86222) expected to recognize the transporter associated with antigen processing like (TAP-L, ABCB9) protein. Although this antibody, according to company documentation, recognizes a band with the expected molecular weight of 84 kDa in HeLa, 293T and mouse NIH3T3 whole-cell lysates, we found that this band is also present in immunoblots of TAP-L deficient bone marrow-derived dendritic cell (BMDC) whole-cell lysates in three independent replicates. We performed extensive verification by multiple PCR tests to confirm the complete absence of the ABCB9 gene in our TAP-L deficient mice. We conclude that the antibody tested cross-reacts with an unidentified protein present in TAP-L knockout cells, which coincidentally runs at the same molecular weight as TAP-L. These findings underline the pitfalls of antibody specificity testing in the absence of cells lacking expression of the target protein.

H. Aya,  M. Inaba,  N. Romani … (1992)
Antigen-presenting, major histocompatibility complex (MHC) class II- rich dendritic cells are known to arise from bone marrow. However, marrow lacks mature dendritic cells, and substantial numbers of proliferating less-mature cells have yet to be identified. The methodology for inducing dendritic cell growth that was recently described for mouse blood now has been modified to MHC class II- negative precursors in marrow. A key step is to remove the majority of nonadherent, newly formed granulocytes by gentle washes during the first 2-4 d of culture. This leaves behind proliferating clusters that are loosely attached to a more firmly adherent "stroma." At days 4-6 the clusters can be dislodged, isolated by 1-g sedimentation, and upon reculture, large numbers of dendritic cells are released. The latter are readily identified on the basis of their distinct cell shape, ultrastructure, and repertoire of antigens, as detected with a panel of monoclonal antibodies. The dendritic cells express high levels of MHC class II products and act as powerful accessory cells for initiating the mixed leukocyte reaction. Neither the clusters nor mature dendritic cells are generated if macrophage colony-stimulating factor rather than granulocyte/macrophage colony-stimulating factor (GM-CSF) is applied. Therefore, GM-CSF generates all three lineages of myeloid cells (granulocytes, macrophages, and dendritic cells). Since > 5 x 10(6) dendritic cells develop in 1 wk from precursors within the large hind limb bones of a single animal, marrow progenitors can act as a major source of dendritic cells. This feature should prove useful for future molecular and clinical studies of this otherwise trace cell type.

Purification and reconstitution of the antigen transport complex TAP: a prerequisite for determination of peptide stoichiometry and ATP hydrolysis.

M Herget,  Robert Tampé,  Christian Scholz … (2009)
The transporter associated with antigen processing (TAP) is an essential machine of the adaptive immune system that translocates antigenic peptides from the cytosol into the endoplasmic reticulum lumen for loading of major histocompatibility class I molecules. To examine this ABC transport complex in mechanistic detail, we have established, after extensive screening and optimization, the solubilization, purification, and reconstitution for TAP to preserve its function in each step. This allowed us to determine the substrate-binding stoichiometry of the TAP complex by fluorescence cross-correlation spectroscopy. In addition, the TAP complex shows strict coupling between peptide binding and ATP hydrolysis, revealing no basal ATPase activity in the absence of peptides. These results represent an optimal starting point for detailed mechanistic studies of the transport cycle of TAP by single molecule experiments to analyze single steps of peptide translocation and the stoichiometry between peptide transport and ATP hydrolysis.

Özlem Demirel,  Ulrich Kalinke,  Frank Grünebach … (2007)
The delivery of protein fragments to major histocompatibility complex (MHC)-loading compartments of professional antigen-presenting cells is essential in the adaptive immune response against pathogens. Apart from the crucial role of the transporter associated with antigen processing (TAP) for peptide loading of MHC class I molecules in the endoplasmic reticulum, TAP-independent translocation pathways have been proposed but not identified so far. Based on its overlapping substrate specificity with TAP, we herein investigated the ABC transporter ABCB9, also named TAP-like (TAPL). Remarkably, TAPL expression is strongly induced during differentiation of monocytes to dendritic cells and to macrophages. TAPL does not, however, restore MHC class I surface expression in TAP-deficient cells, demonstrating that TAPL alone or in combination with single TAP subunits does not form a functional transport complex required for peptide loading of MHC I in the endoplasmic reticulum. In fact, by using quantitative immunofluorescence and subcellular fractionation, TAPL was detected in the lysosomal compartment co-localizing with the lysosome-associated membrane protein LAMP-2. By in vitro assays, we demonstrate a TAPL-specific translocation of peptides into isolated lysosomes, which strictly requires ATP hydrolysis. These results suggest a mechanism by which antigenic peptides have access to the lysosomal compartment in professional antigen-presenting cells.

Competing interests: Both authors confirm that they have no conflict of interest.