Effect of Lipid Additives and Drug on the Rheological Properties of Molten Paraffin Wax, Degree of Surface Drug Coating, and Drug Release in Spray-Congealed Microparticles 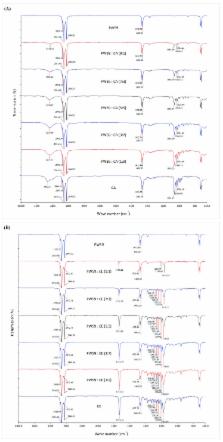 Paraffin wax is potentially useful for producing spray-congealed drug-loaded microparticles with sustained-release and taste-masking properties. To date, there is little information about the effects of blending lipids with paraffin wax on the melt viscosity. In addition, drug particles may not be entirely coated by the paraffin wax matrix. In this study, drug-loaded paraffin wax microparticles were produced by spray-congealing, and the effects of lipid additives on the microparticle production were investigated. The influence of lipid additives (stearic acid, cetyl alcohol, or cetyl esters) and drug (paracetamol) on the rheological properties of paraffin wax were elucidated. Fourier transform-infrared spectroscopy was conducted to investigate the interactions between the blend constituents. Selected formulations were spray-congealed, and the microparticles produced were characterized for their size, drug content, degree of surface drug coating, and drug release. The viscosity of wax-lipid blends was found to be mostly lower than the weighted viscosity when interactions occurred between the blend constituents. Molten paraffin wax exhibited Newtonian flow, which was transformed to plastic flow by paracetamol and pseudoplastic flow by the lipid additive. The viscosity was decreased with lipid added. Compared to plain wax, wax-lipid blends produced smaller spray-congealed microparticles. Drug content remained high. Degree of surface drug coating and drug release were also higher. The lipid additives altered the rheological properties and hydrophobicity of the melt and are useful for modifying the microparticle properties.

Neelima Sinha,  Aman Trehan (2003)
In a very short time, since their emergence, the field of controlled delivery of proteins has grown immensely. Because of their relatively large size, they have low transdermal bioavailabilities. Oral bioavailability is generally poor since they are poorly absorbed and easily degraded by proteolytic enzymes in the gastrointestinal tract. Ocular and nasal delivery is also unfavorable due to degradation by enzymes present in eye tissues and nasal mucosa. Thus parenteral delivery is currently most demanding and suitable for delivery of such molecules. In systemic delivery of proteins, biodegradable microspheres as parenteral depot formulation occupy an important place because of several aspects like protection of sensitive proteins from degradation, prolonged or modified release, pulsatile release patterns. The main objective in developing controlled release protein injectables is avoidance of regular invasive doses which in turn provide patient compliance, comfort as well as control over blood levels. This review presents the outstanding contributions in field of biodegradable microspheres as protein delivery systems, their methods of preparation, drug release, stability, interaction with immune system and regulatory considerations.

Strategic approaches for overcoming peptide and protein instability within biodegradable nano- and microparticles.

Ugo Bilati,  Eric Allémann,  Eric Doelker (2005)
This paper reviews the major factors that are closely involved in peptide and protein degradation during the preparation of biodegradable nano- and microparticles. The various means usually employed for overcoming these obstacles are described, in order to bring to the fore the strategies for protein stabilization. Both processing and formulation parameters can be modified and are distinctly considered from a strategic point of view. We describe how partial or full protein stability retention within the carriers and during drug release might be achieved by individual or combined optimized strategies. Additionally, problems commonly encountered during protein quantification, stability determination and release are briefly reviewed. Artefacts that might occur during sampling and analytical procedures and which might hinder critical interpretation of results are discussed.

Evaluation of melt granulation and ultrasonic spray congealing as techniques to enhance the dissolution of praziquantel.

J. L. Rodriguez,  B Perissutti,  Nadia Passerini … (2006)
Praziquantel (PZQ), an anthelminthic drug widely used in developing countries, is classified in Class II in the Biopharmaceutics Classification Systems; this means that PZQ has very low water solubility and high permeability, thus the dissolution is the absorption rate-limiting factor. The aim of this work was to evaluate the suitability of melt granulation and ultrasonic spray congealing as techniques for enhancing the dissolution rate of PZQ. Granules in high shear mixer were prepared by melt granulation, using polyethylene glycol 4000 or poloxamer 188 as meltable binders and alpha-lactose monohydrate as a filler. Quite regularly shaped granules having main size fraction in the range 200-500 microm were obtained using both formulations; however, only poloxamer 188 granules demonstrated a significant (P=0.05) increase of the PZQ dissolution rate compared to pure drug. To evaluate the potential of ultrasonic spray congealing, Gelucire 50/13 microparticles having different drug to carrier ratios (5, 10, 20 and 30%, w/w) were then prepared. The results showed that all the microparticles had a significant higher dissolution rate (P=0.05) respect to pure PZQ. The increase of the PZQ content considerably decreased the dissolution rate of the drug: 5 and 10% PZQ loaded systems evidenced dissolution significantly enhanced compared to 20 and 30% PZQ microparticles. The microparticle's characterisation, performed by Differential Scanning Calorimetry, Hot Stage Microscopy, X-ray powder diffraction and FT-Infrared analysis, evidenced the absence of both modifications of the solid state of PZQ and of significant interactions between the drug and the carrier. In conclusion, melt granulation and ultrasonic spray congealing could be proposed as solvent free, rapid and low expensive manufacturing methods to increase the in vitro dissolution rate of PZQ.