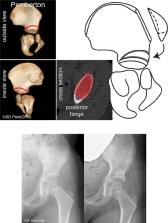 Patients with developmental dysplasia of the hip (DDH) may require a pelvic osteotomy to treat acetabular dysplasia. The Pemberton osteotomy and modified San Diego acetabuloplasty are two options available when surgically treating DDH. The purpose of this study was to compare outcomes following the Pemberton and modified San Diego when treating patients with acetabular dysplasia in typical DDH.

We included 45 hips in the modified San Diego group and 38 hips in the Pemberton group. Hips with less than two years follow-up and patients with a neuromuscular diagnosis were excluded. Clinical outcomes were rated using the modified McKay criteria with radiographic outcomes graded using the Severin score. Avascular necrosis (AVN) was assessed using the Kalamchi and MacEwen criteria.

The modified San Diego acetabuloplasty is a safe and effective alternative to treat acetabular dysplasia in patients with typical DDH. By maintaining an intact medial cortex, acetabular reshaping can be customized to address each patient’s specific acetabular deficiency

One-stage correction of the spastic dislocated hip. Use of pericapsular acetabuloplasty to improve coverage.

Craig Wenger, Gilberto Ramos-Valencia, Mohammad S Mubarak (1992)
We performed a combined one-stage approach for the treatment of eighteen spastic subluxated or dislocated hips in eleven children who had cerebral palsy. All patients were between five and thirteen years old and had spastic subluxation or dislocation of the hip and severe acetabular dysplasia. The operation consisted of release of the adductors, psoas, and proximal hamstrings; a femoral-shortening varusderotation osteotomy; and a pericapsular pelvic osteotomy. The pelvic osteotomy was designed to increase superolateral coverage of the femoral head in the elongated acetabulum, which had erosion of the superior and lateral aspects. At the latest follow-up (mean duration, six years and ten months), seventeen of the eighteen hips remained anatomically reduced.

One-stage correction of the dysplastic hip in cerebral palsy with the San Diego acetabuloplasty: results and complications in 104 hips.

N P McNerney, S Mubarak, D Wenger (2015)
Ninety-two patients with cerebral palsy underwent a special type of pericapsular acetabuloplasty designed to correct the hip dysplasia that occurs in cerebral palsy. The osteotomy was performed as part of a combined procedure (including femoral osteotomy and soft-tissue releases). Retrospective analysis was performed on 75 of the children (104 hips from 1982 through 1995) with a mean follow-up of 6.9 years. Ninety-nine (95%) of the 104 hips remained well reduced at follow-up. There were no redislocations. If the preoperative migration percentage was >70% (severe subluxation), improved results were noted in hips that had an open reduction with capsulorrhaphy. There were 13 complications including intraarticular extension of the acetabuloplasty (one) and avascular necrosis of the femoral head (eight hips, 8%). Indications for addition of a pericapsular acetabuloplasty include an open triradiate cartilage, acetabular dysplasia (acetabular index >25 degrees), and subluxation or dislocation with a migration percentage of >40%. Even hips with relative incongruity and some deformity of the femoral head can be successfully treated with this combined approach.

Open Access This article is distributed under the terms of the Creative Commons Attribution-Non Commercial 4.0 International (CC BY-NC 4.0) licence ( https://creativecommons.org/licenses/by-nc/4.0/) which permits non-commercial use, reproduction and distribution of the work without further permission provided the original work is attributed.