Video games and their associations with physical health: a scoping review 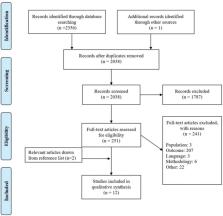 A scoping review was conducted to identify observational and experimental studies pertaining to our research question. Retrieved papers were screened using a two-phase method first involving a selection based on titles and abstracts. Then, potentially relevant studies were read and triaged. The final set of included studies was analysed, and data were subsequently extracted. Observational studies and experimental studies were assessed using the appropriate Cochrane Risk of Bias Tool and data were synthetised according to specific physical health and related health behaviours.

Twelve peer-reviewed articles were retained for further analyses. Results of this scoping review suggest preliminary evidence that time spent gaming is associated with some health outcomes indicators. Our results indicate preliminary evidence that increased gaming time is associated with higher body mass index and lower self-reported general health status. There is insufficient evidence to conclude on a possible association between gaming time and physical activity or sedentary behaviours, sleep or fatigue, musculoskeletal pain or dietary behaviours.

The results of this sopping review suggest an association between increased video game playing time and a deterioration in some physical health indicators but available evidence is scarce, precluding from any strong conclusion.

Scoping studies: towards a methodological framework

Problematic video game use: estimated prevalence and associations with mental and physical health.

Helga Myrseth,  Jørn Hetland,  Helge Molde … (2011)
A nationwide survey was conducted to investigate the prevalence of video game addiction and problematic video game use and their association with physical and mental health. An initial sample comprising 2,500 individuals was randomly selected from the Norwegian National Registry. A total of 816 (34.0 percent) individuals completed and returned the questionnaire. The majority (56.3 percent) of respondents used video games on a regular basis. The prevalence of video game addiction was estimated to be 0.6 percent, with problematic use of video games reported by 4.1 percent of the sample. Gender (male) and age group (young) were strong predictors for problematic use of video games. A higher proportion of high frequency compared with low frequency players preferred massively multiplayer online role-playing games, although the majority of high frequency players preferred other game types. Problematic use of video games was associated with lower scores on life satisfaction and with elevated levels of anxiety and depression. Video game use was not associated with reported amount of physical exercise.

Marc Potenza,  Suchitra Krishnan-Sarin,  Umesh Desai … (2010)
Video game playing may negatively impact youth. However, the existing literature on gaming is inconsistent and often has focused on aggression rather than the health correlates of gaming and the prevalence and correlates of problematic gaming. We anonymously surveyed 4028 adolescents about gaming and reported problems with gaming and other health behaviors. A total of 51.2% of the sample reported gaming (76.3% of boys and 29.2% of girls). There were no negative health correlates of gaming in boys and lower odds of smoking regularly; however, girls who reported gaming were less likely to report depression and more likely to report getting into serious fights and carrying a weapon to school. Among gamers, 4.9% reported problematic gaming, defined as reporting trying to cut back, experiencing an irresistible urge to play, and experiencing a growing tension that could only be relieved by playing. Boys were more likely to report these problems (5.8%) than girls (3.0%). Correlates of problematic gaming included regular cigarette smoking, drug use, depression, and serious fights. Results suggest that gaming is largely normative in boys and not associated with many health factors. In girls, however, gaming seems to be associated with more externalizing behaviors and fewer internalizing symptoms. The prevalence of problematic gaming is low but not insignificant, and problematic gaming may be contained within a larger spectrum of externalizing behaviors. More research is needed to define safe levels of gaming, refine the definition of problematic gaming, and evaluate effective prevention and intervention strategies.