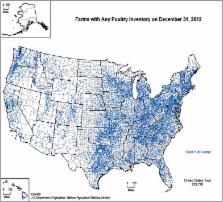 Newcastle disease is caused by virulent strains of Newcastle disease virus (NDV), which causes substantial morbidity and mortality events worldwide in poultry. The virus strains can be differentiated as lentogenic, mesogenic, or velogenic based on a mean death time in chicken embryos. Currently, velogenic strains of NDV are not endemic in United States domestic poultry; however, these strains are present in other countries and are occasionally detected in wild birds in the U.S. A viral introduction into domestic poultry could have severe economic consequences due to the loss of production from sick and dying birds, the cost of control measures such as depopulation and disinfection measures, and the trade restrictions that would likely be imposed as a result of an outbreak. Due to the disease-free status of the U.S. and the high cost of a potential viral incursion to the poultry industry, a qualitative risk analysis was performed to evaluate the vulnerabilities of the U.S. against the introduction of virulent strains of NDV. The most likely routes of virus introduction are explored and data gathered by several federal agencies is provided. Recommendations are ultimately provided for data that would be useful to further understand NDV on the landscape and to utilize all existing sampling opportunities to begin to comprehend viral movement and further characterize the risk of NDV introduction into the U.S.

Darrell Kapczynski, Claudio Afonso, Patti Miller (2013)
Newcastle disease (ND) remains a constant threat to poultry producers worldwide, in spite of the availability and global employment of ND vaccinations since the 1950s. Strains of Newcastle disease virus (NDV) belong to the order Mononegavirales, family Paramyxoviridae, and genus Avulavirus, are contained in one serotype and are also known as avian paramyxovirus serotype-1 (APMV-1). They are pleomorphic in shape and are single-stranded, non-segmented, negative sense RNA viruses. The virus has been reported to infect most orders of birds and thus has a wide host range. Isolates are characterized by virulence in chickens and the presence of basic amino acids at the fusion protein cleavage site. Low virulent NDV typically produce subclinical disease with some morbidity, whereas virulent isolates can result in rapid, high mortality of birds. Virulent NDV are listed pathogens that require immediate notification to the Office of International Epizootics and outbreaks typically result in trade embargos. Protection against NDV is through the use of vaccines generated with low virulent NDV strains. Immunity is derived from neutralizing antibodies formed against the viral hemagglutinin and fusion glycoproteins, which are responsible for attachment and spread of the virus. However, new techniques and technologies have also allowed for more in depth analysis of the innate and cell-mediated immunity of poultry to NDV. Gene profiling experiments have led to the discovery of novel host genes modulated immediately after infection. Differences in virus virulence alter host gene response patterns have been demonstrated. Furthermore, the timing and contributions of cell-mediated immune responses appear to decrease disease and transmission potential. In view of recent reports of vaccine failure from many countries on the ability of classical NDV vaccines to stop spread of disease, renewed interest in a more complete understanding of the global immune response of poultry to NDV will be critical to developing new control strategies and intervention programs for the future.

Proteolytic cleavage of the viral glycoproteins and its significance for the virulence of Newcastle disease virus.

Taxonomy of the order Mononegavirales: update 2017.

Gaya K. Amarasinghe, Yīmíng Bào, Christopher Basler … (2017)
In 2017, the order Mononegavirales was expanded by the inclusion of a total of 69 novel species. Five new rhabdovirus genera and one new nyamivirus genus were established to harbor 41 of these species, whereas the remaining new species were assigned to already established genera. Furthermore, non-Latinized binomial species names replaced all paramyxovirus and pneumovirus species names, thereby accomplishing application of binomial species names throughout the entire order. This article presents the updated taxonomy of the order Mononegavirales as now accepted by the International Committee on Taxonomy of Viruses (ICTV).