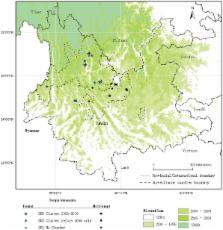 Since the late 1970's, time-space clusters of sudden unexplained death (SUD) in northwest Yunnan, China have alarmed the public and health authorities. From 2006–2009, we initiated enhanced surveillance for SUD to identify a cause, and we warned villagers to avoid eating unfamiliar mushrooms.

We established surveillance for SUD, defined as follows: sudden onset of serious, unexplained physical impairment followed by death in <24 hours. A mild case was onset of any illness in a member of the family or close socially related group of a SUD victim within 1 week of a SUD. We interviewed witnesses of SUD and mild case-persons to identify exposures to potentially toxic substances. We tested blood from mild cases, villagers, and for standard biochemical, enzyme, and electrolyte markers of disease.

We identified 33 SUD, a 73% decline from 2002–2005, distributed among 21 villages of 11 counties. We found a previously undescribed mushroom, Trogia venenata, was eaten by 5 of 7 families with SUD clusters compared to 0 of 31 other control-families from the same villages. In T. venenata–exposed persons SUD was characterized by sudden loss of consciousness during normal activities. This mushroom grew nearby 75% of 61 villages that had time-space SUD clusters from 1975 to 2009 compared to 17% of 18 villages with only single SUD (p<0.001, Fisher's exact test).

Epidemiologic data has implicated T. venenata as a probable cause of clusters of SUD in northwestern Yunnan Province. Warnings to villagers about eating this mushroom should continue.

P Malasit,  G Veerakul,  K Bhuripanyo … (1997)
Between 1981 and 1988, the Centers for Disease Control and Prevention reported a very high incidence of sudden death among young male Southeast Asians who died unexpectedly during sleep. The pattern of death has long been prevalent in Southeast Asia. We carried out a study to identify the clinical markers for patients at high risk of developing sudden unexplained death syndrome (SUDS) and long-term outcomes. We studied 27 Thai men (mean age, 39.7+/-11 years) referred because they had cardiac arrest due to ventricular fibrillation, usually occurring at night while asleep (n=17), or were suspected to have had symptoms similar to the clinical presentation of SUDS (n=10). We performed cardiac testing, including EPS and cardiac catheterization. The patients were then followed at approximately 3-month intervals; our primary end points were death, ventricular fibrillation, or cardiac arrest. A distinct ECG abnormality divided our patients who had no structural heart disease (except 3 patients with mild left ventricular hypertrophy) into two groups: group 1 (n=16) patients had right bundle-branch block and ST-segment elevation in V1 through V3, and group 2 (n=11) had a normal ECG. Group 1 patients had well-defined electrophysiological abnormalities: group 1 had an abnormally prolonged His-Purkinje conduction time (HV interval, 63+/-11 versus 49+/-6 ms; P=.007). Group 1 had a higher incidence of inducible ventricular fibrillation (93% for group 1 versus 11% for group 2; P=.0002) and a positive signal-averaged ECG (92% for group 1 versus 11% for group 2; P=.002), which was associated with a higher incidence of ventricular fibrillation or death (P=.047). The life-table analysis showed that the group 1 patients had a much greater risk of dying suddenly (P=.05). Right bundle-branch block and precordial injury pattern in V1 through V3 is common in SUDS patients and represents an arrhythmogenic marker that identifies patients who face an inordinate risk of ventricular fibrillation or sudden death.

New electrocardiographic leads and the procainamide test for the detection of the Brugada sign in sudden unexplained death syndrome survivors and their relatives.

J. Berger,  David A Guss (2005)
Mushrooms are ubiquitous in nature. They are an important source of nutrition, however, certain varieties contain chemicals that can be highly toxic to humans. Industrially cultivated mushrooms are historically very safe, whereas foraging for mushrooms or accidental ingestion of mushrooms in the environment can result in serious illness and death. The emergency department is the most common site of presentation for patients suffering from acute mushroom poisoning. Although recognition can be facilitated by identification of a characteristic toxidrome, the presenting manifestations can be variable and have considerable overlap with more common and generally benign clinical syndromes. The goal of this two-part article is to review the knowledge base on this subject and provide information that will assist the clinician in the early consideration, diagnosis and treatment of mushroom poisoning. Part I reviewed the epidemiology and demographics of mushroom poisoning, the physical characteristics of the most toxic varieties, the classification of the toxic species, and presented an overview of the cyclopeptide-containing mushroom class. Part II is focused on the presentation of the other classes of toxic mushrooms along with an up-to-date review of the most recently identified poisonous varieties.

Publisher ID: PONE-D-11-21093
DOI: 10.1371/journal.pone.0035894
PMC ID: 3355161
PubMed ID: 22615743
Copyright statement: Shi et al. This is an open-access article distributed under the terms of the Creative Commons Attribution License, which permits unrestricted use, distribution, and reproduction in any medium, provided the original author and source are credited.