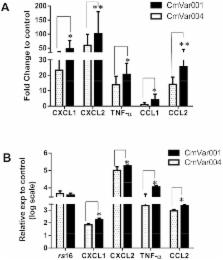 It is not currently possible to predict the probability of whether a woman with a chlamydial genital infection will develop pelvic inflammatory disease (PID). To determine if specific biomarkers may be associated with distinct chlamydial pathotypes, we utilized two Chlamydia muridarum variants ( C. muridarum Var001 [CmVar001] and CmVar004) that differ in their abilities to elicit upper genital tract pathology in a mouse model. CmVar004 has a lower growth rate in vitro and induces pathology in only 20% of C57BL/6 mouse oviducts versus 83.3% of oviducts in CmVar001-infected mice. To determine if chemokine and cytokine production within 24 h of infection is associated with the outcome of pathology, levels of 15 chemokines and cytokines were measured. CmVar004 infection induced significantly lower levels of CXCL1, CXCL2, tumor necrosis factor alpha (TNF-α), and CCL2 in comparison to CmVar001 infection with similar rRNA ( rs16) levels for Chlamydiae. A combination of microRNA (miRNA) sequencing and quantitative real-time PCR (qRT-PCR) analysis of 134 inflammation-related miRNAs was performed 24 h postinfection to determine if the chemokine/cytokine responses would also be reflected in miRNA expression profiles. Interestingly, 12 miRNAs (miR-135a-5p, miR298-5p, miR142-3p, miR223-3p, miR299a-3p, miR147-3p, miR105, miR325-3p, miR132-3p, miR142-5p, miR155-5p, and miR-410-3p) were overexpressed during CmVar004 infection compared to CmVar001 infection, inversely correlating with the respective chemokine/cytokine responses. To our knowledge, this is the first report demonstrating that early biomarkers elicited in the host can differentiate between two pathological variants of chlamydiae and be predictive of upper tract disease.

It is apparent that an infecting chlamydial population consists of multiple genetic variants with differing capabilities of eliciting a pathological response; thus, it may be possible to identify biomarkers specific for a given virulence pathotype. miRNAs are known to regulate genes that in turn regulate signaling pathways involved in disease pathogenesis. Importantly, miRNAs are stable and can reflect a tissue response and therefore have the potential to be biomarkers of disease severity. Currently, with respect to chlamydial infections, there is no way to predict whether an infected patient is more or less likely to develop PID. However, data presented in this study indicate that the expression of a specific miRNA profile associated with a virulent variant early in the infection course may be predictive of an increased risk of pelvic inflammatory disease, allowing more aggressive treatment before significant pathology develops.

Physiological and pathological roles for microRNAs in the immune system.

Aadel Chaudhuri,  Ryan M. O’Connell,  David Baltimore … (2010)
Mammalian microRNAs (miRNAs) have recently been identified as important regulators of gene expression, and they function by repressing specific target genes at the post-transcriptional level. Now, studies of miRNAs are resolving some unsolved issues in immunology. Recent studies have shown that miRNAs have unique expression profiles in cells of the innate and adaptive immune systems and have pivotal roles in the regulation of both cell development and function. Furthermore, when miRNAs are aberrantly expressed they can contribute to pathological conditions involving the immune system, such as cancer and autoimmunity; they have also been shown to be useful as diagnostic and prognostic indicators of disease type and severity. This Review discusses recent advances in our understanding of both the intended functions of miRNAs in managing immune cell biology and their pathological roles when their expression is dysregulated.

Arthur L. Delcher,  Jane Carlton,  Steven Salzberg … (2002)
We describe a suffix-tree algorithm that can align the entire genome sequences of eukaryotic and prokaryotic organisms with minimal use of computer time and memory. The new system, MUMmer 2, runs three times faster while using one-third as much memory as the original MUMmer system. It has been used successfully to align the entire human and mouse genomes to each other, and to align numerous smaller eukaryotic and prokaryotic genomes. A new module permits the alignment of multiple DNA sequence fragments, which has proven valuable in the comparison of incomplete genome sequences. We also describe a method to align more distantly related genomes by detecting protein sequence homology. This extension to MUMmer aligns two genomes after translating the sequence in all six reading frames, extracts all matching protein sequences and then clusters together matches. This method has been applied to both incomplete and complete genome sequences in order to detect regions of conserved synteny, in which multiple proteins from one organism are found in the same order and orientation in another. The system code is being made freely available by the authors.

Interferon modulation of cellular microRNAs as an antiviral mechanism.

F V Chisari,  Guofeng Cheng,  Michael David … (2007)
RNA interference through non-coding microRNAs (miRNAs) represents a vital component of the innate antiviral immune response in plants and invertebrate animals; however, a role for cellular miRNAs in the defence against viral infection in mammalian organisms has thus far remained elusive. Here we show that interferon beta (IFNbeta) rapidly modulates the expression of numerous cellular miRNAs, and that eight of these IFNbeta-induced miRNAs have sequence-predicted targets within the hepatitis C virus (HCV) genomic RNA. The introduction of synthetic miRNA-mimics corresponding to these IFNbeta-induced miRNAs reproduces the antiviral effects of IFNbeta on HCV replication and infection, whereas neutralization of these antiviral miRNAs with anti-miRNAs reduces the antiviral effects of IFNbeta against HCV. In addition, we demonstrate that IFNbeta treatment leads to a significant reduction in the expression of the liver-specific miR-122, an miRNA that has been previously shown to be essential for HCV replication. Therefore, our findings strongly support the notion that mammalian organisms too, through the interferon system, use cellular miRNAs to combat viral infections.

This article is a direct contribution from a member of the American Academy of Microbiology.