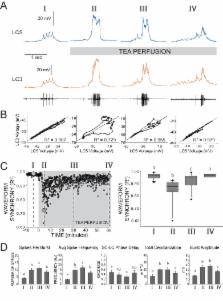 Motor neurons of the crustacean cardiac ganglion generate virtually identical, synchronized output despite the fact that each neuron uses distinct conductance magnitudes. As a result of this variability, manipulations that target ionic conductances have distinct effects on neurons within the same ganglion, disrupting synchronized motor neuron output that is necessary for proper cardiac function. We hypothesized that robustness in network output is accomplished via plasticity that counters such destabilizing influences. By blocking high-threshold K + conductances in motor neurons within the ongoing cardiac network, we discovered that compensation both resynchronized the network and helped restore excitability. Using model findings to guide experimentation, we determined that compensatory increases of both G A and electrical coupling restored function in the network. This is one of the first direct demonstrations of the physiological regulation of coupling conductance in a compensatory context, and of synergistic plasticity across cell- and network-level mechanisms in the restoration of output.

Neurons can communicate with each other by releasing chemicals called neurotransmitters, or by forming direct connections with each other known as gap junctions. These direct connections allow electrical impulses to flow from one neuron to another via pores in the membranes between the cells. Unlike communication via neurotransmitters, gap junctions are usually thought to be hard-wired and unchanging over the life of the animal.

Lane et al. recorded electrical activity in a network of neurons that generates rhythmic heart contractions in the Jonah crab. Neurons in this network usually all fire an electrical impulse at the same time, which is crucial to make sure that the whole heart contracts at the same time. The experiments show that drugs that block potassium channel pores in the membrane cause the neurons to fire too much and at different times to each other.

However, the network of neurons soon adapted to the changes caused by the drugs and returned to working as normal. Mimicking these changes in a computer model of the neuron network, together with experimental data, showed that changes to the gap junctions play a major role in restoring normal activity to the network.

The next step following on from this research is to understand how a network of neurons ‘senses’ that it is not working normally and changes its electrical activity.

Variability, compensation and homeostasis in neuron and network function.

Eve Marder,  Jean-Marc Goaillard (2006)
Neurons in most animals live a very long time relative to the half-lives of all of the proteins that govern excitability and synaptic transmission. Consequently, homeostatic mechanisms are necessary to ensure stable neuronal and network function over an animal's lifetime. To understand how these homeostatic mechanisms might function, it is crucial to understand how tightly regulated synaptic and intrinsic properties must be for adequate network performance, and the extent to which compensatory mechanisms allow for multiple solutions to the production of similar behaviour. Here, we use examples from theoretical and experimental studies of invertebrates and vertebrates to explore several issues relevant to understanding the precision of tuning of synaptic and intrinsic currents for the operation of functional neuronal circuits.

Xiao Wang,  G Buzsáki (1996)
Fast neuronal oscillations (gamma, 20-80 Hz) have been observed in the neocortex and hippocampus during behavioral arousal. Using computer simulations, we investigated the hypothesis that such rhythmic activity can emerge in a random network of interconnected GABAergic fast-spiking interneurons. Specific conditions for the population synchronization, on properties of single cells and the circuit, were identified. These include the following: (1) that the amplitude of spike afterhyperpolarization be above the GABAA synaptic reversal potential; (2) that the ratio between the synaptic decay time constant and the oscillation period be sufficiently large; (3) that the effects of heterogeneities be modest because of a steep frequency-current relationship of fast-spiking neurons. Furthermore, using a population coherence measure, based on coincident firings of neural pairs, it is demonstrated that large-scale network synchronization requires a critical (minimal) average number of synaptic contacts per cell, which is not sensitive to the network size. By changing the GABAA synaptic maximal conductance, synaptic decay time constant, or the mean external excitatory drive to the network, the neuronal firing frequencies were gradually and monotonically varied. By contrast, the network synchronization was found to be high only within a frequency band coinciding with the gamma (20-80 Hz) range. We conclude that the GABAA synaptic transmission provides a suitable mechanism for synchronized gamma oscillations in a sparsely connected network of fast-spiking interneurons. In turn, the interneuronal network can presumably maintain subthreshold oscillations in principal cell populations and serve to synchronize discharges of spatially distributed neurons.

Electrical coupling and neuronal synchronization in the Mammalian brain.

Michael V.L. Bennett,  R.Suzanne Zukin (2004)
Certain neurons in the mammalian brain have long been known to be joined by gap junctions, which are the most common type of electrical synapse. More recently, cloning of neuron-specific connexins, increased capability of visualizing cells within brain tissue, labeling of cell types by transgenic methods, and generation of connexin knockouts have spurred a rapid increase in our knowledge of the role of gap junctions in neural activity. This article reviews the many subtleties of transmission mediated by gap junctions and the mechanisms whereby these junctions contribute to synchronous firing.