A National Study on Nurses’ Exposure to Occupational Violence in Lebanon: Prevalence, Consequences and Associated Factors 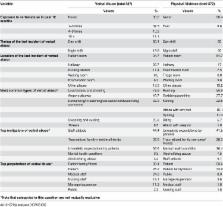 Healthcare institutions have commonly reported exposure of employees, particularly nurses, to high levels of occupational violence. Despite such evidence in the Middle East Region, there is a dearth of national studies that have systematically investigated this phenomenon. This study investigates the prevalence, characteristics, consequences and factors associated with nurses’ exposure to occupational violence in Lebanon.

A cross-sectional design was utilized to survey a nationally representative sample of 915 nurses registered with the Order of Nurses in Lebanon. Stratified random sampling by governorate was utilized. Individually-mailed questionnaires collected information on exposure to violence, degree of burnout and demographic/professional background. The main outcome variables were exposure to verbal abuse (never, 1–3, 4–9 and 10+ times) and physical violence (never, ever) over the past 12-months. Descriptive statistics were used to estimate prevalence of violence. Multivariable, binomial and multinomial regression models were carried out to investigate the correlates of exposure to verbal abuse and physical violence, respectively.

An alarming two-thirds of respondents reported exposure to verbal abuse which was found to be a significant predictor of the three subscales of burnout, intention to quit and exposure to physical violence. The prevalence of exposure to physical violence is disconcerting due to its severe consequences. Policy and decision-makers are urged to use study findings for policy and practice interventions to create safe work environments conducive to nurses’ productivity and retention.

Scoping workplace aggression in nursing: findings from an Australian study.

C Bobrowski, P Bobrowski, G Farrell (2006)
This paper reports a study of workplace aggression among nurses in Tasmania, Australia. There is international concern about a perceived rise in occupational violence as a major worldwide public health problem, with associated financial costs. There is reason to suspect that aggression towards nurses is increasing. For example, increased illicit drug use puts nurses at the sharp end in managing patients admitted with drug-related problems. Such people are often resistant to healthcare intervention, and often have associated disorders, including mental illness. Despite this increased awareness, comprehensive data on occupational violence in nursing are not available. A specially designed questionnaire was sent to all nurses registered with the Nursing Board of Tasmania (n = 6326) in November/December 2002, with 2407 usable questionnaires returned. The response rate was 38%. A majority of respondents (63.5%) had experienced some form of aggression (verbal or physical abuse) in the four working weeks immediately prior to the survey. Patients/clients or their visitors were identified as the main perpetrators, followed by medical and nursing colleagues. Abuse influenced nurses' distress, their desire to stay in nursing, their productivity and the potential to make errors, yet they were reluctant to make their complaints 'official'. As well as reporting high levels of verbal and physical abuse, nurses were distressed because they could not provide the appropriate care to meet patients' needs. Few working environments were free of aggression. Future research should try to determine the specific factors, including staff characteristics and environment, associated with the high levels of aggression reported in 'hot spots' where, on the basis of the present results, many staff experience high levels of verbal and physical abuse. Unless managers take steps to improve the situation, attrition from the profession for this reason will continue.

Horizontal violence: experiences of Registered Nurses in their first year of practice.

J Coverdale, Kellie N Smith, Erika Poole … (2003)
Interpersonal conflict among nurses (traditionally called 'horizontal violence' or 'bullying') is a significant issue confronting the nursing profession. However, there is a dearth of research focusing on horizontal violence experienced by new graduate nurses. In order to assess the priority for preventive intervention programmes, the aims of this study were to determine the prevalence of horizontal violence experienced by nurses in their first year of practice; to describe the characteristics of the most distressing incidents experienced; to determine the consequences, and measure the psychological impact, of such events; and to determine the adequacy of training received to manage horizontal violence. An anonymous survey was mailed to nurses in New Zealand who had registered in the year prior to November 2000 (n = 1169) and 551 completed questionnaires were returned (response rate 47%). Information was requested on the type and frequency of interpersonal conflict; a description of the most distressing event experienced; the consequences of the behaviour; and training to manage such events. The Impact of Event Scale was used to measure the level of distress experienced. Many new graduates experienced horizontal violence across all clinical settings. Absenteeism from work, the high number of respondents who considered leaving nursing, and scores on the Impact of Event Scale all indicated the serious impact of interpersonal conflict. Nearly half of the events described were not reported, only 12% of those who described a distressing incident received formal debriefing, and the majority of respondents had no training to manage the behaviour. First year of practice is an important confidence-building phase for nurses and yet many new graduates are exposed to horizontal violence, which may negatively impact on this process. The findings underscore a priority for the development of effective prevention programmes. Adequate reporting mechanisms and supportive services should also be readily available for those exposed to the behaviour.

Emily J Rippon (2000)
Although violence is increasing in most workplaces, it has become a significant problem in health care professions. Not only has the number of incidents increased but also the severity of the impact has caused profound traumatic effects on the primary, secondary and tertiary victims. More health care professionals than ever are suffering from symptoms of post-traumatic stress disorder. Addressing the problem of violence in the workplace has been exacerbated by a lack of a clear definition of what constitutes aggression and violence. As a result, some administrators have been slow to commit resources to prevent further incidents and mitigate the impact. This article describes the magnitude of the problem from both an academic research and an operational perspective. A definition is presented as an initial step towards standardizing the research, and establishing an appropriate baseline upon which intervention policies and procedures can be created. This benchmark will also help to encourage empirical research into aggression and violence in health care professions and other professions. Further research needs to be conducted to create a comprehensive instrument that can more accurately measure the range of incidents and the severity of the impact.

Data Availability Data cannot be made publicly available due to ethical restrictions. De-identified data are available with permission from the institutional review board at the American University of Beirut—Social and Behavioral Sciences Ethics Committee.
Data availability:
ScienceOpen disciplines: Uncategorized