Systemic Therapy of Metastatic Melanoma: On the Road to Cure 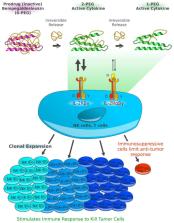 Malignant melanoma is more dangerous than most other skin cancers due to its ability to spread early and aggressively. Until the development of new therapeutic strategies, the median survival of patients with metastatic melanoma was just a few months. Immunotherapy, the first regimen, leading to significant improvement, blocks immune checkpoints, which normally dampen immune responses, enabling our defense cells to recognize and destroy cancer cells again. Immunotherapy achieves long-term survival in about 50% of metastatic melanoma patients. Besides, targeted therapy has also significantly improved the survival of melanoma patients, blocking cell-signaling proteins, which are altered in about 50% of melanomas and lead to uncontrolled tumor cell growth. In addition to the approved regimens, there are numerous new treatment strategies, ranging from modified viruses to personalized immune cells that attack and destroy tumor cells. This review shall give an insight into both already approved regimens and upcoming developments.

This decade has brought significant survival improvement in patients with metastatic melanoma with targeted therapies and immunotherapies. As our understanding of the mechanisms of action of these therapeutics evolves, even more impressive therapeutic success is being achieved through various combination strategies, including combinations of different immunotherapies as well as with other modalities. This review summarizes prospectively and retrospectively generated clinical evidence on modern melanoma therapy, focusing on immunotherapy and targeted therapy with BRAF kinase inhibitors and MEK kinase inhibitors (BRAF/MEK inhibitors), including recent data presented at major conference meetings. The combination of the anti-PD-1 directed monoclonal antibody nivolumab and of the CTLA-4 antagonist ipilimumab achieves unprecedented 5-year overall survival (OS) rates above 50%; however, toxicity is high. For PD-1 monotherapy (nivolumab or pembrolizumab), toxicities are in general well manageable. Today, novel combinations of such immune checkpoint inhibitors (ICIs) are under investigation, for example with cytokines and oncolytic viruses (i.e., pegylated interleukin-2, talimogene laherparepvec). Furthermore, current studies investigate the combined or sequential use of ICIs plus BRAF/MEK inhibitors. Several studies focus particularly on poor prognosis patients, as e.g., on anti-PD-1 refractory melanoma, patients with brain metastases, or uveal melanoma. It is hoped, on the road to cure, that these new approaches further improve long term survival in patients with advanced or metastatic melanoma.

The Hallmarks of Cancer

Improved Survival with Ipilimumab in Patients with Metastatic Melanoma

F. Stephen Hodi,  Steven J O'Day,  David F McDermott … (2010)
An improvement in overall survival among patients with metastatic melanoma has been an elusive goal. In this phase 3 study, ipilimumab--which blocks cytotoxic T-lymphocyte-associated antigen 4 to potentiate an antitumor T-cell response--administered with or without a glycoprotein 100 (gp100) peptide vaccine was compared with gp100 alone in patients with previously treated metastatic melanoma. A total of 676 HLA-A*0201-positive patients with unresectable stage III or IV melanoma, whose disease had progressed while they were receiving therapy for metastatic disease, were randomly assigned, in a 3:1:1 ratio, to receive ipilimumab plus gp100 (403 patients), ipilimumab alone (137), or gp100 alone (136). Ipilimumab, at a dose of 3 mg per kilogram of body weight, was administered with or without gp100 every 3 weeks for up to four treatments (induction). Eligible patients could receive reinduction therapy. The primary end point was overall survival. The median overall survival was 10.0 months among patients receiving ipilimumab plus gp100, as compared with 6.4 months among patients receiving gp100 alone (hazard ratio for death, 0.68; P<0.001). The median overall survival with ipilimumab alone was 10.1 months (hazard ratio for death in the comparison with gp100 alone, 0.66; P=0.003). No difference in overall survival was detected between the ipilimumab groups (hazard ratio with ipilimumab plus gp100, 1.04; P=0.76). Grade 3 or 4 immune-related adverse events occurred in 10 to 15% of patients treated with ipilimumab and in 3% treated with gp100 alone. There were 14 deaths related to the study drugs (2.1%), and 7 were associated with immune-related adverse events. Ipilimumab, with or without a gp100 peptide vaccine, as compared with gp100 alone, improved overall survival in patients with previously treated metastatic melanoma. Adverse events can be severe, long-lasting, or both, but most are reversible with appropriate treatment. (Funded by Medarex and Bristol-Myers Squibb; ClinicalTrials.gov number, NCT00094653.)