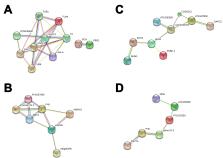 Witches’ broom disease (WBD) of cacao ( Theobroma cacao L.), caused by Moniliophthora perniciosa, is the most important limiting factor for the cacao production in Brazil. Hence, the development of cacao genotypes with durable resistance is the key challenge for control the disease. Proteomic methods are often used to study the interactions between hosts and pathogens, therefore helping classical plant breeding projects on the development of resistant genotypes. The present study compared the proteomic alterations between two cacao genotypes standard for WBD resistance and susceptibility, in response to M. perniciosa infection at 72 h and 45 days post-inoculation; respectively the very early stages of the biotrophic and necrotrophic stages of the cacao x M. perniciosa interaction.

A total of 554 proteins were identified, being 246 in the susceptible Catongo and 308 in the resistant TSH1188 genotypes. The identified proteins were involved mainly in metabolism, energy, defense and oxidative stress. The resistant genotype showed more expressed proteins with more variability associated with stress and defense, while the susceptible genotype exhibited more repressed proteins. Among these proteins, stand out pathogenesis related proteins (PRs), oxidative stress regulation related proteins, and trypsin inhibitors. Interaction networks were predicted, and a complex protein-protein interaction was observed. Some proteins showed a high number of interactions, suggesting that those proteins may function as cross-talkers between these biological functions.

We present the first study reporting the proteomic alterations of resistant and susceptible genotypes in the T. cacao x M. perniciosa pathosystem. The important altered proteins identified in the present study are related to key biologic functions in resistance, such as oxidative stress, especially in the resistant genotype TSH1188, that showed a strong mechanism of detoxification. Also, the positive regulation of defense and stress proteins were more evident in this genotype. Proteins with significant roles against fungal plant pathogens, such as chitinases, trypsin inhibitors and PR 5 were also identified, and they may be good resistance markers. Finally, important biological functions, such as stress and defense, photosynthesis, oxidative stress and carbohydrate metabolism were differentially impacted with M. perniciosa infection in each genotype.

The genome of Theobroma cacao.

Angélique D’Hont,  Olivier Fouet,  Anne Dievart … (2011)
We sequenced and assembled the draft genome of Theobroma cacao, an economically important tropical-fruit tree crop that is the source of chocolate. This assembly corresponds to 76% of the estimated genome size and contains almost all previously described genes, with 82% of these genes anchored on the 10 T. cacao chromosomes. Analysis of this sequence information highlighted specific expansion of some gene families during evolution, for example, flavonoid-related genes. It also provides a major source of candidate genes for T. cacao improvement. Based on the inferred paleohistory of the T. cacao genome, we propose an evolutionary scenario whereby the ten T. cacao chromosomes were shaped from an ancestor through eleven chromosome fusions.

Correlation between Protein and mRNA Abundance in Yeast

Steven Gygi,  Yvan Rochon,  B. Robert Franza … (1999)
We have determined the relationship between mRNA and protein expression levels for selected genes expressed in the yeastSaccharomyces cerevisiaegrowing at mid-log phase. The proteins contained in total yeast cell lysate were separated by high-resolution two-dimensional (2D) gel electrophoresis. Over 150 protein spots were excised and identified by capillary liquid chromatography-tandem mass spectrometry (LC-MS/MS). Protein spots were quantified by metabolic labeling and scintillation counting. Corresponding mRNA levels were calculated from serial analysis of gene expression (SAGE) frequency tables (V. E. Velculescu, L. Zhang, W. Zhou, J. Vogelstein, M. A. Basrai, D. E. Bassett, Jr., P. Hieter, B. Vogelstein, and K. W. Kinzler, Cell 88:243–251, 1997). We found that the correlation between mRNA and protein levels was insufficient to predict protein expression levels from quantitative mRNA data. Indeed, for some genes, while the mRNA levels were of the same value the protein levels varied by more than 20-fold. Conversely, invariant steady-state levels of certain proteins were observed with respective mRNA transcript levels that varied by as much as 30-fold. Another interesting observation is that codon bias is not a predictor of either protein or mRNA levels. Our results clearly delineate the technical boundaries of current approaches for quantitative analysis of protein expression and reveal that simple deduction from mRNA transcript analysis is insufficient.

Proteomics to study genes and genomes.

V Mann,  A. Shekhar Pandey (2000)
Proteomics, the large-scale analysis of proteins, will contribute greatly to our understanding of gene function in the post-genomic era. Proteomics can be divided into three main areas: (1) protein micro-characterization for large-scale identification of proteins and their post-translational modifications; (2) 'differential display' proteomics for comparison of protein levels with potential application in a wide range of diseases; and (3) studies of protein-protein interactions using techniques such as mass spectrometry or the yeast two-hybrid system. Because it is often difficult to predict the function of a protein based on homology to other proteins or even their three-dimensional structure, determination of components of a protein complex or of a cellular structure is central in functional analysis. This aspect of proteomic studies is perhaps the area of greatest promise. After the revolution in molecular biology exemplified by the ease of cloning by DNA methods, proteomics will add to our understanding of the biochemistry of proteins, processes and pathways for years to come.