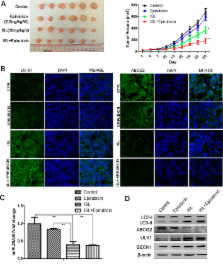 Recent findings have revealed that dysregulated miRNAs contribute significantly to autophagy and chemoresistance. Pharmacologically targeting autophagy-related miRNAs is a novel strategy to reverse drug resistance. Here, we report a novel function of isoliquiritigenin (ISL) as a natural inhibitor of autophagy-related miR-25 in killing drug-resistant breast cancer cells. ISL induced chemosensitization, cell cycle arrest and autophagy, but not apoptosis, in MCF-7/ADR cells. ISL also promoted the degradation of the ATP-binding cassette (ABC) protein ABCG2 primarily via the autophagy-lysosome pathway. More importantly, miRNA 3.0 array experiments identified miR-25 as the main target of ISL in triggering autophagy flux. A mechanistic study validated that miR-25 inhibition led to autophagic cell death by directly increasing ULK1 expression, an early regulator in the autophagy induction phase. miR-25 overexpression was demonstrated to block ISL-induced autophagy and chemosensitization. Subsequent in vivo experiments showed that ISL had chemosensitizing potency, as revealed by an increase in LC3-II staining, the downregulation of ABCG2, a reduction in miR-25 expression and the activation of the miR-25 target ULK1. Overall, our results not only indicate that ISL acts as a natural autophagy inducer to increase breast cancer chemosensitivity, but also reveal that miR-25 functions as a novel regulator of autophagy by targeting ULK1.

Catherine Booth,  Joseph Ludwig,  Gavin Paterson … (2006)
Effective treatment of metastatic cancers usually requires the use of toxic chemotherapy. In most cases, multiple drugs are used, as resistance to single agents occurs almost universally. For this reason, elucidation of mechanisms that confer simultaneous resistance to different drugs with different targets and chemical structures - multidrug resistance - has been a major goal of cancer biologists during the past 35 years. Here, we review the most common of these mechanisms, one that relies on drug efflux from cancer cells mediated by ATP-binding cassette (ABC) transporters. We describe various approaches to combating multidrug-resistant cancer, including the development of drugs that engage, evade or exploit efflux by ABC transporters.

Zhifen Yang,  Daniel Klionsky (2010)
Autophagy, a cellular catabolic pathway, is evolutionarily conserved from yeast to mammals. Central to this process is the formation of autophagosomes, double-membrane vesicles responsible for delivering long-lived proteins and excess or damaged organelle into the lysosome for degradation and reuse of the resulting macromolecules. In addition to the hallmark discovery of core molecular machinery components involved in autophagosome formation, complex signaling cascades controlling autophagy have also begun to emerge, with mTOR as a central but far from exclusive player. Malfunction of autophagy has been linked to a wide range of human pathologies, including cancer, neurodegeneration, and pathogen infection. Here we highlight the recent advances in identifying and understanding the core molecular machinery and signaling pathways that are involved in mammalian autophagy. Copyright 2009 Elsevier Ltd. All rights reserved.