A strategy for the design of skyrmion racetrack memories 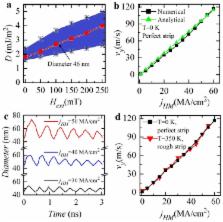 Magnetic storage based on racetrack memory is very promising for the design of ultra-dense, low-cost and low-power storage technology. Information can be coded in a magnetic region between two domain walls or, as predicted recently, in topological magnetic objects known as skyrmions. Here, we show the technological advantages and limitations of using Bloch and Néel skyrmions manipulated by spin current generated within the ferromagnet or via the spin-Hall effect arising from a non-magnetic heavy metal underlayer. We found that the Néel skyrmion moved by the spin-Hall effect is a very promising strategy for technological implementation of the next generation of skyrmion racetrack memories (zero field, high thermal stability, and ultra-dense storage). We employed micromagnetics reinforced with an analytical formulation of skyrmion dynamics that we developed from the Thiele equation. We identified that the excitation, at high currents, of a breathing mode of the skyrmion limits the maximal velocity of the memory.

Stuart S P Parkin,  Luc Thomas,  Masamitsu Hayashi … (2008)
Recent developments in the controlled movement of domain walls in magnetic nanowires by short pulses of spin-polarized current give promise of a nonvolatile memory device with the high performance and reliability of conventional solid-state memory but at the low cost of conventional magnetic disk drive storage. The racetrack memory described in this review comprises an array of magnetic nanowires arranged horizontally or vertically on a silicon chip. Individual spintronic reading and writing nanodevices are used to modify or read a train of approximately 10 to 100 domain walls, which store a series of data bits in each nanowire. This racetrack memory is an example of the move toward innately three-dimensional microelectronic devices.

Y Onose,  Naoto Nagaosa,  N Kanazawa … (2010)
Crystal order is not restricted to the periodic atomic array, but can also be found in electronic systems such as the Wigner crystal or in the form of orbital order, stripe order and magnetic order. In the case of magnetic order, spins align parallel to each other in ferromagnets and antiparallel in antiferromagnets. In other, less conventional, cases, spins can sometimes form highly nontrivial structures called spin textures. Among them is the unusual, topologically stable skyrmion spin texture, in which the spins point in all the directions wrapping a sphere. The skyrmion configuration in a magnetic solid is anticipated to produce unconventional spin-electronic phenomena such as the topological Hall effect. The crystallization of skyrmions as driven by thermal fluctuations has recently been confirmed in a narrow region of the temperature/magnetic field (T-B) phase diagram in neutron scattering studies of the three-dimensional helical magnets MnSi (ref. 17) and Fe(1-x)Co(x)Si (ref. 22). Here we report real-space imaging of a two-dimensional skyrmion lattice in a thin film of Fe(0.5)Co(0.5)Si using Lorentz transmission electron microscopy. With a magnetic field of 50-70 mT applied normal to the film, we observe skyrmions in the form of a hexagonal arrangement of swirling spin textures, with a lattice spacing of 90 nm. The related T-B phase diagram is found to be in good agreement with Monte Carlo simulations. In this two-dimensional case, the skyrmion crystal seems very stable and appears over a wide range of the phase diagram, including near zero temperature. Such a controlled nanometre-scale spin topology in a thin film may be useful in observing unconventional magneto-transport effects.

S. Kanai,  H. Ohno,  Hiromitsu Yamamoto … (2010)
Magnetic tunnel junctions (MTJs) with ferromagnetic electrodes possessing a perpendicular magnetic easy axis are of great interest as they have a potential for realizing next-generation high-density non-volatile memory and logic chips with high thermal stability and low critical current for current-induced magnetization switching. To attain perpendicular anisotropy, a number of material systems have been explored as electrodes, which include rare-earth/transition-metal alloys, L1(0)-ordered (Co, Fe)-Pt alloys and Co/(Pd, Pt) multilayers. However, none of them so far satisfy high thermal stability at reduced dimension, low-current current-induced magnetization switching and high tunnel magnetoresistance ratio all at the same time. Here, we use interfacial perpendicular anisotropy between the ferromagnetic electrodes and the tunnel barrier of the MTJ by employing the material combination of CoFeB-MgO, a system widely adopted to produce a giant tunnel magnetoresistance ratio in MTJs with in-plane anisotropy. This approach requires no material other than those used in conventional in-plane-anisotropy MTJs. The perpendicular MTJs consisting of Ta/CoFeB/MgO/CoFeB/Ta show a high tunnel magnetoresistance ratio, over 120%, high thermal stability at dimension as low as 40 nm diameter and a low switching current of 49 microA.