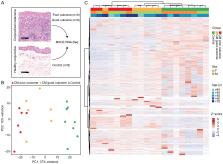 This study characterizes the transcriptome and the cellular tumor microenvironment (TME) of conjunctival melanoma (CM) and identifies prognostically relevant biomarkers. 12 formalin-fixed and paraffin-embedded CM were analyzed by MACE RNA sequencing, including six cases each with good or poor clinical outcome, the latter being defined by local recurrence and/or systemic metastases. Eight healthy conjunctival specimens served as controls. The TME of CM, as determined by bioinformatic cell type enrichment analysis, was characterized by the enrichment of melanocytes, pericytes and especially various immune cell types, such as plasmacytoid dendritic cells, natural killer T cells, B cells and mast cells. Differentially expressed genes between CM and control were mainly involved in inhibition of apoptosis, proteolysis and response to growth factors. POU3F3, BIRC5 and 7 were among the top expressed genes associated with inhibition of apoptosis. 20 genes, among them CENPK, INHA, USP33, CASP3, SNORA73B, AAR2, SNRNP48 and GPN1, were identified as prognostically relevant factors reaching high classification accuracy (area under the curve: 1.0). The present study provides new insights into the TME and the transcriptional profile of CM and additionally identifies new prognostic biomarkers. These results add new diagnostic tools and may lead to new options of targeted therapy for CM.

Gregor Sturm,  Francesca Finotello,  Florent Petitprez … (2019)
Abstract Motivation The composition and density of immune cells in the tumor microenvironment (TME) profoundly influence tumor progression and success of anti-cancer therapies. Flow cytometry, immunohistochemistry staining or single-cell sequencing are often unavailable such that we rely on computational methods to estimate the immune-cell composition from bulk RNA-sequencing (RNA-seq) data. Various methods have been proposed recently, yet their capabilities and limitations have not been evaluated systematically. A general guideline leading the research community through cell type deconvolution is missing. Results We developed a systematic approach for benchmarking such computational methods and assessed the accuracy of tools at estimating nine different immune- and stromal cells from bulk RNA-seq samples. We used a single-cell RNA-seq dataset of ∼11 000 cells from the TME to simulate bulk samples of known cell type proportions, and validated the results using independent, publicly available gold-standard estimates. This allowed us to analyze and condense the results of more than a hundred thousand predictions to provide an exhaustive evaluation across seven computational methods over nine cell types and ∼1800 samples from five simulated and real-world datasets. We demonstrate that computational deconvolution performs at high accuracy for well-defined cell-type signatures and propose how fuzzy cell-type signatures can be improved. We suggest that future efforts should be dedicated to refining cell population definitions and finding reliable signatures. Availability and implementation A snakemake pipeline to reproduce the benchmark is available at https://github.com/grst/immune_deconvolution_benchmark. An R package allows the community to perform integrated deconvolution using different methods (https://grst.github.io/immunedeconv). Supplementary information Supplementary data are available at Bioinformatics online.

Laura M Urbanski,  Nathan Leclair,  Olga Anczuków (2018)
Defects in alternative splicing are frequently found in human tumors and result either from mutations in splicing-regulatory elements of specific cancer genes or from changes in the regulatory splicing machinery. RNA splicing regulators have emerged as a new class of oncoproteins and tumor suppressors, and contribute to disease progression by modulating RNA isoforms involved in the hallmark cancer pathways. Thus, dysregulation of alternative RNA splicing is fundamental to cancer and provides a potentially rich source of novel therapeutic targets. Here, we review the alterations in splicing regulatory factors detected in human tumors, as well as the resulting alternatively spliced isoforms that impact cancer hallmarks, and discuss how they contribute to disease pathogenesis. RNA splicing is a highly regulated process and, as such, the regulators are themselves tightly regulated. Differential transcriptional and posttranscriptional regulation of splicing factors modulates their levels and activities in tumor cells. Furthermore, the composition of the tumor microenvironment can also influence which isoforms are expressed in a given cell type and impact drug responses. Finally, we summarize current efforts in targeting alternative splicing, including global splicing inhibition using small molecules blocking the spliceosome or splicing-factor-modifying enzymes, as well as splice-switching RNA-based therapeutics to modulate cancer-specific splicing isoforms. This article is categorized under: RNA in Disease and Development > RNA in Disease RNA Processing > Splicing Regulation/Alternative Splicing.

Incidence of noncutaneous melanomas in the U.S.