Artistic Skills Recovery and Compensation in Visual Artists after Stroke 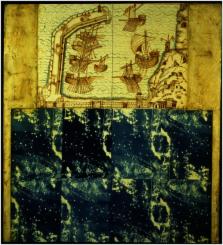 Art is a characteristic of mankind, which requires superior central nervous processing and integration of motor functions with visual information. At the present time, a significant amount of information related to neurobiological basis of artistic creation has been derived from neuro-radiological cognitive studies, which have revealed that subsequent to tissue destruction, the artists continue to create art. The current study aims to review the most important cases of visual artists with stroke and to discuss artistic skills recovery and compensation as well as artistic style after stroke.

The role of various central nervous system regions in artistic creation was reviewed on the basis of previously published functional studies. Our PubMed search (1995–2015) has identified 10 famous artists with right cerebral stroke as well as 5 with left cerebral stroke who survived and continued to create art after stroke. As the artists included in this review lived at various times during the twentieth century and in different countries, clinical information related to their case was limited. However, it appears that artistic skills recovery and compensation appear within days after stroke. Some of the artists would subsequently change their artistic style. All these elements have been evaluated within the context of specific clinical cases.

The poststroke artistic skills recovery and compensation with development of a new style or the opposite, regaining the previous prestroke style, represents a significant element of clinical importance in medical rehabilitation as well as neuroesthetics, which requires further evaluation. At the present time, the molecular mechanisms of artistic creation are poorly understood, and more standardized clinical and experimental studies are needed.

R. Gray,  Jacob B. Hirsh,  Xenophon Papademetris … (2010)
We used a new theory of the biological basis of the Big Five personality traits to generate hypotheses about the association of each trait with the volume of different brain regions. Controlling for age, sex, and whole-brain volume, results from structural magnetic resonance imaging of 116 healthy adults supported our hypotheses for four of the five traits: Extraversion, Neuroticism, Agreeableness, and Conscientiousness. Extraversion covaried with volume of medial orbitofrontal cortex, a brain region involved in processing reward information. Neuroticism covaried with volume of brain regions associated with threat, punishment, and negative affect. Agreeableness covaried with volume in regions that process information about the intentions and mental states of other individuals. Conscientiousness covaried with volume in lateral prefrontal cortex, a region involved in planning and the voluntary control of behavior. These findings support our biologically based, explanatory model of the Big Five and demonstrate the potential of personality neuroscience (i.e., the systematic study of individual differences in personality using neuroscience methods) as a discipline.

Semir Zeki,  Hideaki Kawabata (2004)
We have used the technique of functional MRI to address the question of whether there are brain areas that are specifically engaged when subjects view paintings that they consider to be beautiful, regardless of the category of painting (that is whether it is a portrait, a landscape, a still life, or an abstract composition). Prior to scanning, each subject viewed a large number of paintings and classified them into beautiful, neutral, or ugly. They then viewed the same paintings in the scanner. The results show that the perception of different categories of paintings are associated with distinct and specialized visual areas of the brain, that the orbito-frontal cortex is differentially engaged during the perception of beautiful and ugly stimuli, regardless of the category of painting, and that the perception of stimuli as beautiful or ugly mobilizes the motor cortex differentially.

What do motor "recovery" and "compensation" mean in patients following stroke?

Michael Wolf,  Jeffrey Kleim,  Mindy F Levin (2009)
There is a lack of consistency among researchers and clinicians in the use of terminology that describes changes in motor ability following neurological injury. Specifically, the terms and definitions of motor compensation and motor recovery have been used in different ways, which is a potential barrier to interdisciplinary communication. This Point of View describes the problem and offers a solution in the form of definitions of compensation and recovery at the neuronal, motor performance, and functional levels within the framework of the International Classification of Functioning model.

Specialty section: This article was submitted to Stroke, a section of the journal Frontiers in Neurology