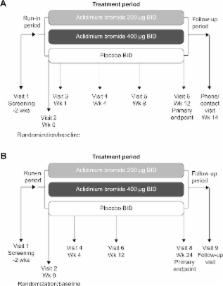 Three long-acting muscarinic antagonists (LAMAs) are now available in Europe, providing clinicians and patients with a choice of interventions, which is important in COPD, which is clinically a heterogeneous disease. The first LAMA, tiotropium, has been widely used over the last decade as a once-daily maintenance therapy in stable COPD to improve patients’ health-related quality of life and to reduce the risk of exacerbations. Administered via the HandiHaler ® device, it is safe and well tolerated. Another new once-daily LAMA, glycopyrronium, has also been shown to improve health status and reduce exacerbations, and is well tolerated. The subject of this review is a third LAMA, aclidinium bromide, which was approved as a twice-daily maintenance bronchodilator treatment. In the pivotal Phase III clinical trials, patients receiving aclidinium achieved significantly greater improvements in lung function, reductions in breathlessness, and improvements in health status compared with placebo, for up to 24 weeks. In continuation studies, these improvements were sustained for up to 52 weeks. Pooled data showed exacerbation frequency was significantly reduced with aclidinium versus placebo. Preclinical and pharmacological studies demonstrating low systemic bioavailability and a low propensity to induce cardiac arrhythmias were translated into a favorable tolerability profile in the clinical trial program – the adverse event profile of aclidinium was similar to placebo, with a low incidence of anticholinergic and cardiac adverse events. While additional studies are needed to evaluate its full clinical potential, aclidinium is an important part of this recent expansion of LAMA therapeutic options, providing clinicians and patients with an effective and well-tolerated COPD treatment.

Tiotropium Respimat inhaler and the risk of death in COPD.

Robert Wise,  Antonio Anzueto,  Daniel Cotton … (2013)
Tiotropium delivered at a dose of 5 μg with the Respimat inhaler showed efficacy similar to that of 18 μg of tiotropium delivered with the HandiHaler inhalation device in placebo-controlled trials involving patients with chronic obstructive pulmonary disease (COPD). Although tiotropium HandiHaler was associated with reduced mortality, as compared with placebo, more deaths were reported with tiotropium Respimat than with placebo.

James Donohue (2005)
The FEV1 is widely used by physicians in the diagnosis, staging, treatment, monitoring, and establishing prognosis for patients with COPD. The MCID is the smallest difference which patients perceive as beneficial and which would mandate a change in patient management. A precise MCID for FEV1 has not been established. In attempt to establish a MCID for predose or trough FEV1, several limitations need to be addressed. There are issues such as reproducibility, repeatability, acceptability, variability, placebo effect, and equipment effects. Patient factors, such as baseline level of FEV1, albuterol reversibility, diurnal variation, influence the results. Nonetheless, using anchoring techniques, a change in pre dose FEV1 of about 100 mL can be perceived by patients, correlates with fewer relapses following exacerbations and is in the range usually achieved with bronchodilators approved for COPD. In the future, consistent reporting of spirometric variables, such as a predose FEV1 and other outcomes, can be incorporated into a more quantitative effort to establish the MCID. Also distributional/statistical methods may be useful in determining the MCID FEV1.