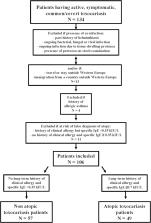 To assess the possible influence of atopy on the clinical picture of human toxocariasis, a retrospective study was carried out using file records for patients who attended the Outpatient Clinic of Parasitology in Toulouse University Hospitals. A total of 106 file records for patients who had been diagnosed with common/covert toxocariasis were extracted from the database. Forty-nine patients (20 females and 29 males) were considered atopic since they exhibited a long (≥ 1 year) history of various allergic issues along with a titer ≥ 0.7 kIU/L for specific IgE against at least two out of nine mixes of common inhalant allergens. Fifty-seven patients (42 females and 15 males) were designated nonatopic on the basis of a negative result (<0.35 kIU/L) of the test for specific IgE. Demographic (age and sex), clinical (20 signs or symptoms) and laboratory (blood eosinophil count, eosinophil cationic protein, serum total IgE, and specific anti- Toxocara IgE) variables were investigated by bivariate analysis followed by multivariate regression analysis using “atopy” as the outcome variable. On the basis of our results, the clinical or laboratory picture of toxocaral disease was not affected by the presence of an atopic status.

Chronic intestinal helminth infections are associated with immune hyporesponsiveness and induction of a regulatory network.

Camila Alexandrina Figueiredo,  Laura Rodrigues,  Nívea Bispo da Silva … (2010)
Helminth infections have been associated with protection against allergy and autoimmune diseases. We investigated the effects of chronic infections with Ascaris lumbricoides and Trichuris trichiura (measured twice over a 5-year period) on cytokine and antibody responses. We collected blood from 1,060 children aged 4 to 11 years living in a poor urban area of Brazil and measured Th1 (gamma interferon [IFN-gamma]) and Th2 (interleukin-5 [IL-5] and IL-13) cytokines and the regulatory cytokine IL-10 in unstimulated and stimulated (with mitogen or A. lumbricoides antigens) cultures of peripheral blood leukocytes and levels of total IgE and anti-A. lumbricoides IgG4 and IgE in serum. Intestinal helminth infections were associated with an increased proportion of children producing IL-5 in response to A. lumbricoides and producing IL-10 spontaneously, especially among coinfected and chronically infected children. Helminth infections were associated with a generalized suppression of cytokine responses to mitogen. Levels of total IgE and anti-A. lumbricoides IgG4 and IgE were especially elevated in chronically infected children. In conclusion, intestinal helminth infections were associated with a typical Th2 immune response profile and with the induction of immune hyporesponsiveness that was associated with greater frequencies of the production of spontaneous IL-10.

Maria Yazdanbakhsh,  Anita. van den Biggelaar,  Rick Maizels (2001)
The immune response to helminth infections has long been known to share key features with the allergic response. In particular, both are typified by enhanced T helper 2 (Th2) responses with high levels of interleukin-4 (IL-4), IL-5 and IL-13, accompanied by eosinophilia and abundant IgE production. Paradoxically, the geographical distribution of helminth parasitism and allergic disease is complementary rather than coincident. Thus, the question arises does the Th2 response to parasites protect or pre-empt the host from developing Th2-linked allergic manifestations? It is suggested that downregulatory immune mechanisms, which dampen the anti-parasite response, might benefit the host by blocking progression to atopic reactions. This is of relevance in explaining how the "hygiene hypothesis" might operate immunologically and in the design of therapeutics.