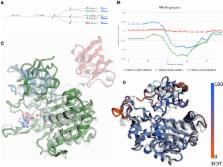 Homology modelling has matured into an important technique in structural biology, significantly contributing to narrowing the gap between known protein sequences and experimentally determined structures. Fully automated workflows and servers simplify and streamline the homology modelling process, also allowing users without a specific computational expertise to generate reliable protein models and have easy access to modelling results, their visualization and interpretation. Here, we present an update to the SWISS-MODEL server, which pioneered the field of automated modelling 25 years ago and been continuously further developed. Recently, its functionality has been extended to the modelling of homo- and heteromeric complexes. Starting from the amino acid sequences of the interacting proteins, both the stoichiometry and the overall structure of the complex are inferred by homology modelling. Other major improvements include the implementation of a new modelling engine, ProMod3 and the introduction a new local model quality estimation method, QMEANDisCo. SWISS-MODEL is freely available at https://swissmodel.expasy.org.

Mona Singh,  John A Capra (2007)
All residues in a protein are not equally important. Some are essential for the proper structure and function of the protein, whereas others can be readily replaced. Conservation analysis is one of the most widely used methods for predicting these functionally important residues in protein sequences. We introduce an information-theoretic approach for estimating sequence conservation based on Jensen-Shannon divergence. We also develop a general heuristic that considers the estimated conservation of sequentially neighboring sites. In large-scale testing, we demonstrate that our combined approach outperforms previous conservation-based measures in identifying functionally important residues; in particular, it is significantly better than the commonly used Shannon entropy measure. We find that considering conservation at sequential neighbors improves the performance of all methods tested. Our analysis also reveals that many existing methods that attempt to incorporate the relationships between amino acids do not lead to better identification of functionally important sites. Finally, we find that while conservation is highly predictive in identifying catalytic sites and residues near bound ligands, it is much less effective in identifying residues in protein-protein interfaces. Data sets and code for all conservation measures evaluated are available at http://compbio.cs.princeton.edu/conservation/

Xiang-Yu Xia,  Jiahuai Han,  Xin Lu … (2004)
Proteins function mainly through interactions, especially with DNA and other proteins. While some large-scale interaction networks are now available for a number of model organisms, their experimental generation remains difficult. Consequently, interolog mapping--the transfer of interaction annotation from one organism to another using comparative genomics--is of significant value. Here we quantitatively assess the degree to which interologs can be reliably transferred between species as a function of the sequence similarity of the corresponding interacting proteins. Using interaction information from Saccharomyces cerevisiae, Caenorhabditis elegans, Drosophila melanogaster, and Helicobacter pylori, we find that protein-protein interactions can be transferred when a pair of proteins has a joint sequence identity >80% or a joint E-value <10(-70). (These "joint" quantities are the geometric means of the identities or E-values for the two pairs of interacting proteins.) We generalize our interolog analysis to protein-DNA binding, finding such interactions are conserved at specific thresholds between 30% and 60% sequence identity depending on the protein family. Furthermore, we introduce the concept of a "regulog"--a conserved regulatory relationship between proteins across different species. We map interologs and regulogs from yeast to a number of genomes with limited experimental annotation (e.g., Arabidopsis thaliana) and make these available through an online database at http://interolog.gersteinlab.org. Specifically, we are able to transfer approximately 90,000 potential protein-protein interactions to the worm. We test a number of these in two-hybrid experiments and are able to verify 45 overlaps, which we show to be statistically significant. Copyright 2004 Cold Spring Harbor Laboratory Press

How significant is a protein structure similarity with TM-score = 0.5?

George Xu,  Yang Zhang (2010)
Protein structure similarity is often measured by root mean squared deviation, global distance test score and template modeling score (TM-score). However, the scores themselves cannot provide information on how significant the structural similarity is. Also, it lacks a quantitative relation between the scores and conventional fold classifications. This article aims to answer two questions: (i) what is the statistical significance of TM-score? (ii) What is the probability of two proteins having the same fold given a specific TM-score? We first made an all-to-all gapless structural match on 6684 non-homologous single-domain proteins in the PDB and found that the TM-scores follow an extreme value distribution. The data allow us to assign each TM-score a P-value that measures the chance of two randomly selected proteins obtaining an equal or higher TM-score. With a TM-score at 0.5, for instance, its P-value is 5.5 x 10(-7), which means we need to consider at least 1.8 million random protein pairs to acquire a TM-score of no less than 0.5. Second, we examine the posterior probability of the same fold proteins from three datasets SCOP, CATH and the consensus of SCOP and CATH. It is found that the posterior probability from different datasets has a similar rapid phase transition around TM-score=0.5. This finding indicates that TM-score can be used as an approximate but quantitative criterion for protein topology classification, i.e. protein pairs with a TM-score >0.5 are mostly in the same fold while those with a TM-score <0.5 are mainly not in the same fold.

The authors wish it to be known that, in their opinion, the first five authors should be regarded as joint First Authors.