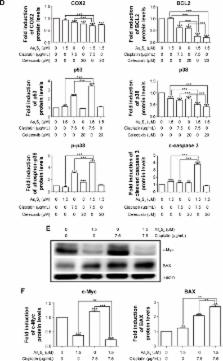 We used gastric and colon cancer cell lines to study the synergistic effect of As 4S 4 in combination with BRD4 inhibitor JQ1, or with chemotherapy drug cisplatin and irinotecan or with COX2 inhibitor celecoxib. We investigated the mechanism of the cytotoxic effect of these novel combinations.

We found that when As 4S 4 was combined with JQ1, cisplatin, irinotecan or celecoxib, its cytotoxic activity was dramatically enhanced in both gastric and colon cancer cell lines. As 4S 4 and JQ1 inhibited BRD4 and c-Myc while activating p53 expression synergistically. As 4S 4 inhibited COX2 and cyclin D1 expression. When As 4S 4 was combined with chemotherapy drug cisplatin or COX2 inhibitor celecoxib, its inhibition of COX2, BCL2, and p38 expression was enhanced. As 4S 4 and cisplatin synergistically stimulated p53, phosphor-p38 (p-p38), and increased cleaved caspase 3 (c-caspase 3).

As 4S 4 in combination with JQ1, cisplatin, irinotecan or celecoxib showed enhanced cytotoxic effect on gastric and colon cancer cells, indicating the potential application of these novel drug combinations as part of treatment strategy that warrants further investigation. As 4S 4 and JQ1 demonstrate synergistic activation of p53 and inhibition of c-Myc. As 4S 4 and cisplatin and celecoxib activated multiple apoptosis pathways.

,  Sheela Rao,  P. J. Oates … (2008)
We evaluated capecitabine (an oral fluoropyrimidine) and oxaliplatin (a platinum compound) as alternatives to infused fluorouracil and cisplatin, respectively, for untreated advanced esophagogastric cancer. In a two-by-two design, we randomly assigned 1002 patients to receive triplet therapy with epirubicin and cisplatin plus either fluorouracil (ECF) or capecitabine (ECX) or triplet therapy with epirubicin and oxaliplatin plus either fluorouracil (EOF) or capecitabine (EOX). The primary end point was noninferiority in overall survival for the triplet therapies containing capecitabine as compared with fluorouracil and for those containing oxaliplatin as compared with cisplatin. For the capecitabine-fluorouracil comparison, the hazard ratio for death in the capecitabine group was 0.86 (95% confidence interval [CI], 0.80 to 0.99); for the oxaliplatin-cisplatin comparison, the hazard ratio for the oxaliplatin group was 0.92 (95% CI, 0.80 to 1.10). The upper limit of the confidence intervals for both hazard ratios excluded the predefined noninferiority margin of 1.23. Median survival times in the ECF, ECX, EOF, and EOX groups were 9.9 months, 9.9 months, 9.3 months, and 11.2 months, respectively; survival rates at 1 year were 37.7%, 40.8%, 40.4%, and 46.8%, respectively. In the secondary analysis, overall survival was longer with EOX than with ECF, with a hazard ratio for death of 0.80 in the EOX group (95% CI, 0.66 to 0.97; P=0.02). Progression-free survival and response rates did not differ significantly among the regimens. Toxic effects of capecitabine and fluorouracil were similar. As compared with cisplatin, oxaliplatin was associated with lower incidences of grade 3 or 4 neutropenia, alopecia, renal toxicity, and thromboembolism but with slightly higher incidences of grade 3 or 4 diarrhea and neuropathy. Capecitabine and oxaliplatin are as effective as fluorouracil and cisplatin, respectively, in patients with previously untreated esophagogastric cancer. (Current Controlled Trials number, ISRCTN51678883 [controlled-trials.com].). Copyright 2008 Massachusetts Medical Society.

The effect of celecoxib, a cyclooxygenase-2 inhibitor, in familial adenomatous polyposis.

M Thun,  S. J. Henley,  C Patrono (2002)
Numerous experimental, epidemiologic, and clinical studies suggest that nonsteroidal anti-inflammatory drugs (NSAIDs), particularly the highly selective cyclooxygenase (COX)-2 inhibitors, have promise as anticancer agents. NSAIDs restore normal apoptosis in human adenomatous colorectal polyps and in various cancer cell lines that have lost adenomatous polyposis coli gene function. NSAIDs also inhibit angiogenesis in cell culture and rodent models of angiogenesis. Many epidemiologic studies have found that long-term use of NSAIDs is associated with a lower risk of colorectal cancer, adenomatous polyps, and, to some extent, other cancers. Two NSAIDs, sulindac and celecoxib, have been found to inhibit the growth of adenomatous polyps and cause regression of existing polyps in randomized trials of patients with familial adenomatous polyposis (FAP). However, unresolved questions about the safety, efficacy, optimal treatment regimen, and mechanism of action of NSAIDs currently limit their clinical application to the prevention of polyposis in FAP patients. Moreover, the development of safe and effective drugs for chemoprevention is complicated by the potential of even rare, serious toxicity to offset the benefit of treatment, particularly when the drug is administered to healthy people who have low annual risk of developing the disease for which treatment is intended. This review considers generic approaches to improve the balance between benefits and risks associated with the use of NSAIDs in chemoprevention. We critically examine the published experimental, clinical, and epidemiologic literature on NSAIDs and cancer, especially that regarding colorectal cancer, and identify strategies to overcome the various logistic and scientific barriers that impede clinical trials of NSAIDs for cancer prevention. Finally, we suggest research opportunities that may help to accelerate the future clinical application of NSAIDs for cancer prevention or treatment.