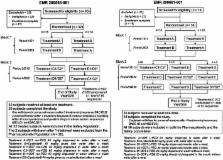 Orally dispersible tablet ( ODT) formulations of levo praziquantel ( L‐PZQ) and racemic PZQ (rac‐PZQ) are being developed to treat schistosomiasis in preschool‐aged children. Two crossover studies ( N = 32 and 36, respectively) assessed the relative bioavailability of these ODTs vs. Cysticide in adults. Bioavailability for L‐ PZQ of ODT rac‐ PZQ and Cysticide at 40 mg/kg was comparable (L‐ PZQ area under the concentration‐time curve from zero to infinity ( AUC 0–∞) test/reference ratio (90% confidence interval (CI)): 96% (84–111%)), whereas relative bioavailability of ODT L‐ PZQ 20 mg/kg was ~40% that of Cysticide 40 mg/kg (test/reference: 40% (35–46%)). AUC 0‐∞ and peak plasma concentration (C max) were highly variable in both studies. For both ODTs, L‐ PZQ AUC 0–∞ showed greater than dose‐proportional increase over the ranges tested and a significant food effect. Safety was comparable among formulations. The lower bioavailability of ODT L‐ PZQ, as well as the high variability and nondose‐proportionality of pharmacokinetic (PK) parameters, highlighted the need for a dedicated pediatric dose‐finding study for the selection of the most appropriate formulation and dose (L‐ PZQ ODT or rac‐ PZQ ODT).

Daniel G. Colley,  Amaya L. Bustinduy,  W. Secor … (2014)
Human schistosomiasis--or bilharzia--is a parasitic disease caused by trematode flukes of the genus Schistosoma. By conservative estimates, at least 230 million people worldwide are infected with Schistosoma spp. Adult schistosome worms colonise human blood vessels for years, successfully evading the immune system while excreting hundreds to thousands of eggs daily, which must either leave the body in excreta or become trapped in nearby tissues. Trapped eggs induce a distinct immune-mediated granulomatous response that causes local and systemic pathological effects ranging from anaemia, growth stunting, impaired cognition, and decreased physical fitness, to organ-specific effects such as severe hepatosplenism, periportal fibrosis with portal hypertension, and urogenital inflammation and scarring. At present, preventive public health measures in endemic regions consist of treatment once every 1 or 2 years with the isoquinolinone drug, praziquantel, to suppress morbidity. In some locations, elimination of transmission is now the goal; however, more sensitive diagnostics are needed in both the field and clinics, and integrated environmental and health-care management will be needed to ensure elimination. Copyright © 2014 Elsevier Ltd. All rights reserved.

Unresolved issues in anthelmintic pharmacology for helminthiases of humans.

Timothy G. Geary,  Katherine Woo,  James McCarthy … (2010)
Helminth infections are an important constraint on the health and development of poor children and adults. Anthelmintic treatment programmes provide a safe and effective response, and increasing numbers of people are benefitting from these public health initiatives. Despite decades of clinical experience with anthelmintics for the treatment of human infections, relatively little is known about their clinical pharmacology. All of the drugs were developed initially in response to the considerable market for veterinary anthelmintics in high- and middle-income countries. In contrast, the greatest burden caused by these infections in humans is in resource-poor settings and as a result there has been insufficient commercial incentive to support studies on how these drugs work in humans, and how they should best be used in control programmes. The advent of mass drug administration programmes for the control of schistosomiasis, lymphatic filariasis, onchocerciasis and soil-transmitted helminthiases in humans increases the urgency to better understand and better monitor drug resistance, and to broaden the currently very narrow range of available anthelmintics. This provides fresh impetus for developing a comprehensive research platform designed to improve our understanding of these important drugs, in order to bring the scientific knowledge base supporting their use to a standard equivalent to that of drugs commonly used in developed countries. Furthermore, a better understanding of their clinical pharmacology will enable improved therapy and could contribute to the discovery of new products. Copyright 2009 Australian Society for Parasitology Inc. Published by Elsevier Ltd. All rights reserved.

Schistosomiasis in infants and preschool-aged children: Infection in a single Schistosoma haematobium and a mixed S. haematobium-S. mansoni foci of Niger.

Amadou Garba,  Nouhou Barkiré,  Ali Djibo … (2010)
The burden of schistosomiasis in infants and preschool-aged children and their mothers is poorly known. We carried out a cross-sectional epidemiological survey in two villages in Niger: Falmado is endemic for Schistosoma haematobium only, whereas a mixed S. haematobium-S. mansoni focus has been reported from Diambala. The survey examined 282 children (149 girls, 133 boys, average age: 2.6 years) and 224 mothers (average age: 30.1 years). For S. haematobium diagnosis, two urine samples obtained on consecutive days were subjected to the standard urine filtration method. Additionally, macro- and microhaematuria were determined. The diagnosis of S. mansoni was based on a single stool sample with duplicate Kato-Katz thick smears. In Diambala, a standardised, pre-tested questionnaire was administered to mothers, which recorded demographic data, treatment history with anthelminthic drugs, household sanitation and water supply, and bathing practices for their children. Prevalence of egg-patent S. haematobium infections among young children and their mothers was respectively 50.5% and 55.6%, in Falmado, and 60.5% and 72.2% in Diambala. The prevalence of S. mansoni infection in Diambala was 43.8% among children and 52.1% in mothers. Mixed egg-patent infections of S. haematobium and S. mansoni were revealed in 28.6% of the children and 37.3% of the mothers. Questionnaire data showed that 69.8% of the children were accompanied by their mothers to schistosomiasis transmission sites before they were 1 year of age, and that three-quarter of the mothers used water directly drawn from the irrigation canals to wash their children. To conclude, a substantive proportion of children below the age of 5 years had egg-patent schistosomiasis, inclusive of co-infection with S. haematobium and S. mansoni. In the context of schistosomiasis control, more attention should be paid on preschool-aged children and women of childbearing age, so that they can benefit from preventive chemotherapy, which in turn might increase effective coverage of those infected. 2010 Elsevier B.V. All rights reserved.