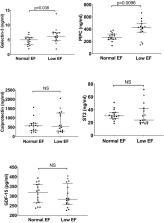 Coronary artery aneurysms and myocarditis are well‐recognized complications of Kawasaki disease ( KD) but no systematic evaluation of the consequences of myocarditis has been performed in the subset presenting with low ejection fraction ( EF). We postulated that more severe myocardial inflammation as evidenced by low EF during the acute phase could lead to late myocardial fibrosis.

We measured the carboxyterminal propeptide of procollagen type I ( PIPC), soluble suppressor of tumorigenicity 2, galectin‐3 (Gal‐3), growth‐differentiation factor‐15, and calprotectin by ELISA in late convalescent blood samples from 16 KD patients who had an EF ≤55% on their initial echocardiogram. Results were compared with samples from sex‐ and age‐matched KD patients with initial EF >60%. In the univariate analysis, the median Gal‐3 and PIPC levels in the low EF group were significantly higher than those in the normal EF group (Gal‐3: low EF 6.216 versus normal EF 4.976 mg/dL P=0.038, PIPC: low EF 427.4 versus normal EF 265.2 mg/dL, P=0.01). In a multivariable analysis, there were significant differences for Gal‐3 and PIPC levels between the low and normal EF groups, adjusting for age, sex, and worst z score.

Jerka Dumić,  Sanja Dabelic,  Mirna Flögel (2006)
Galectins, an ancient lectin family, are characterized by specific binding of beta-galactosides through evolutionary conserved sequence elements of carbohydrate-recognition domain (CRD). A structurally unique member of the family is galectin-3; in addition to the CRD it contains a proline- and glycine-rich N-terminal domain (ND) through which is able to form oligomers. Galectin-3 is widely spread among different types of cells and tissues, found intracellularly in nucleus and cytoplasm or secreted via non-classical pathway outside of cell, thus being found on the cell surface or in the extracellular space. Through specific interactions with a variety of intra- and extracellular proteins galectin-3 affects numerous biological processes and seems to be involved in different physiological and pathophysiological conditions, such as development, immune reactions, and neoplastic transformation and metastasis. The review attempts to summarize the existing information on structural, biochemical and intriguing functional properties of galectin-3.

Daniel Kotlarz,  Hans Niessen,  Matthias Eden … (2006)
Data from the Women's Health Study show that serum levels of growth-differentiation factor-15 (GDF-15), a distant member of the transforming growth factor-beta superfamily, are an independent risk indicator for adverse cardiovascular events. However, the cellular sources, upstream regulators, and functional effects of GDF-15 in the cardiovascular system have not been elucidated. We have identified GDF-15 by cDNA expression array analysis as a gene that is strongly upregulated by nitrosative stress in cultured cardiomyocytes isolated from 1- to 3-day-old rats. GDF-15 mRNA and pro-peptide expression levels were also induced in cardiomyocytes subjected to simulated ischemia/reperfusion (I/R) via NO-peroxynitrite-dependent signaling pathways. GDF-15 was actively secreted into the culture supernatant, suggesting that it might exert autocrine/paracrine effects during I/R. To explore the in vivo relevance of these findings, mice were subjected to transient or permanent coronary artery ligation. Myocardial GDF-15 mRNA and pro-peptide abundance rapidly increased in the area-at-risk after ischemic injury. Similarly, patients with an acute myocardial infarction had enhanced myocardial GDF-15 pro-peptide expression levels. As shown by immunohistochemistry, cardiomyocytes in the ischemic area contributed significantly to the induction of GDF-15 in the infarcted human heart. To delineate the function of GDF-15 during I/R, Gdf-15 gene-targeted mice were subjected to transient coronary artery ligation for 1 hour followed by reperfusion for 24 hours. Gdf-15-deficient mice developed greater infarct sizes and displayed more cardiomyocyte apoptosis in the infarct border zone after I/R compared with wild-type littermates, indicating that endogenous GDF-15 limits myocardial tissue damage in vivo. Moreover, treatment with recombinant GDF-15 protected cultured cardiomyocytes from apoptosis during simulated I/R as shown by histone ELISA, TUNEL/Hoechst staining, and annexin V/propidium iodide fluorescence-activated cell sorting (FACS) analysis. Mechanistically, the prosurvival effects of GDF-15 in cultured cardiomyocytes were abolished by phosphoinositide 3-OH kinase inhibitors and adenoviral expression of dominant-negative Akt1 (K179M mutation). In conclusion, our study identifies induction of GDF-15 in the heart as a novel defense mechanism that protects from I/R injury.

Leah Iles,  Heinz Pflüger,  Arintaya Phrommintikul … (2008)
The purpose of this study was to investigate a noninvasive method for quantifying diffuse myocardial fibrosis with cardiac magnetic resonance imaging (CMRI). Diffuse myocardial fibrosis is a fundamental process in pathologic remodeling in cardiomyopathy and is postulated to cause increased cardiac stiffness and poor clinical outcomes. Although regional fibrosis is easily imaged with cardiac magnetic resonance, there is currently no noninvasive method for quantifying diffuse myocardial fibrosis. We performed CMRI on 45 subjects (25 patients with heart failure, 20 control patients), on a clinical 1.5-T CMRI scanner. A prototype T(1) mapping sequence was used to calculate the post-contrast myocardial T(1) time as an index of diffuse fibrosis; regional fibrosis was identified by delayed contrast enhancement. Regional and global systolic function was assessed by cine CMRI in standard short- and long-axis planes, with echocardiography used to evaluate diastology. An additional 9 subjects underwent CMRI and endomyocardial biopsy for histologic correlation. Post-contrast myocardial T(1) times correlated histologically with fibrosis (R = -0.7, p = 0.03) and were shorter in heart failure subjects than controls (383 +/- 17 ms vs. 564 +/- 23 ms, p < 0.0001). The T(1) time of heart failure myocardium was shorter than that in controls even when excluding areas of regional fibrosis (429 +/- 22 ms vs. 564 +/- 23 ms, p < 0.0001). The post-contrast myocardial T(1) time shortened as diastolic function worsened (562 +/- 24 ms in normal diastolic function vs. 423 +/- 33 ms in impaired diastolic function vs. 368 +/- 20 ms in restrictive function, p < 0.001). Contrast-enhanced CMRI T(1) mapping identifies changes in myocardial T(1) times in heart failure, which appear to reflect diffuse fibrosis.