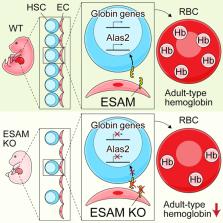 Endothelial cell-selective adhesion molecule (ESAM) is a lifelong marker of hematopoietic stem cells (HSCs). Although we previously elucidated the functional importance of ESAM in HSCs in stress-induced hematopoiesis in adults, it is unclear how ESAM affects hematopoietic development during fetal life. To address this issue, we analyzed fetuses from conventional or conditional ESAM-knockout mice. Approximately half of ESAM-null fetuses died after mid-gestation due to anemia. RNA sequencing analyses revealed downregulation of adult-type globins and Alas2, a heme biosynthesis enzyme, in ESAM-null fetal livers. These abnormalities were attributed to malfunction of ESAM-null HSCs, which was demonstrated in culture and transplantation experiments. Although crosslinking ESAM directly influenced gene transcription in HSCs, observations in conditional ESAM-knockout fetuses revealed the critical involvement of ESAM expressed in endothelial cells in fetal lethality. Thus, we showed that ESAM had important roles in developing definitive hematopoiesis. Furthermore, we unveiled the importance of endothelial ESAM in this process. 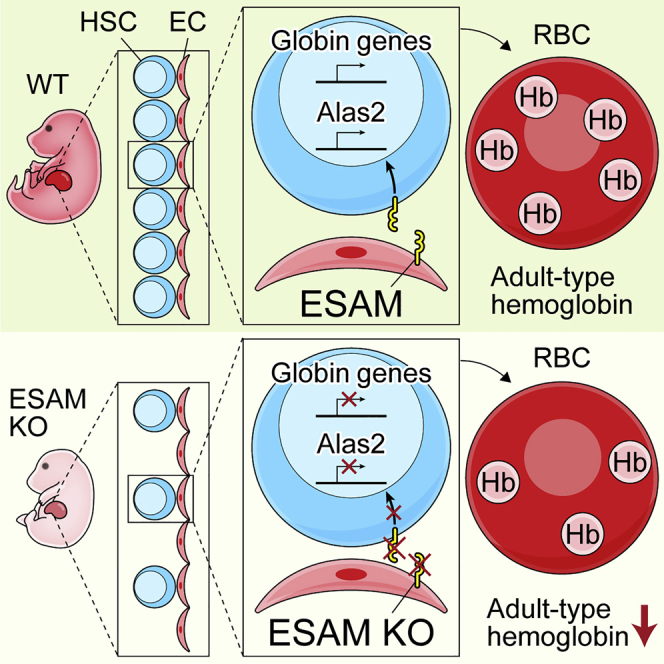 Ueda et al. shed light on the contribution of endothelial cell-selective adhesion molecule (ESAM) to the ontogeny of definitive hematopoiesis. ESAM deficiency caused high mortality in fetuses after mid-gestation. Expression of Alas2 and adult-type globin genes decreased in ESAM-null HSCs, which resulted in the impairment of development of adult-type erythropoiesis. The authors also revealed functional involvement of ESAM-expressing endothelial cells.

Sean Morrison,  David Scadden (2014)
Niches are local tissue microenvironments that maintain and regulate stem cells. Haematopoiesis provides a model for understanding mammalian stem cells and their niches, but the haematopoietic stem cell (HSC) niche remains incompletely defined and beset by competing models. Recent progress has been made in elucidating the location and cellular components of the HSC niche in the bone marrow. The niche is perivascular, created partly by mesenchymal stromal cells and endothelial cells and often, but not always, located near trabecular bone. Outstanding questions concern the cellular complexity of the niche, the role of the endosteum and functional heterogeneity among perivascular microenvironments.

Gou Koh,  H. Sato,  Keisuke Ito … (2004)
The quiescent state is thought to be an indispensable property for the maintenance of hematopoietic stem cells (HSCs). Interaction of HSCs with their particular microenvironments, known as the stem cell niches, is critical for adult hematopoiesis in the bone marrow (BM). Here, we demonstrate that HSCs expressing the receptor tyrosine kinase Tie2 are quiescent and antiapoptotic, and comprise a side-population (SP) of HSCs, which adhere to osteoblasts (OBs) in the BM niche. The interaction of Tie2 with its ligand Angiopoietin-1 (Ang-1) induced cobblestone formation of HSCs in vitro and maintained in vivo long-term repopulating activity of HSCs. Furthermore, Ang-1 enhanced the ability of HSCs to become quiescent and induced adhesion to bone, resulting in protection of the HSC compartment from myelosuppressive stress. These data suggest that the Tie2/Ang-1 signaling pathway plays a critical role in the maintenance of HSCs in a quiescent state in the BM niche.