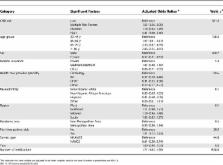 Despite the proven benefits of aspirin therapy in the primary and secondary prevention of cardiovascular disease (CVD), utilization rates of aspirin remain suboptimal in relation to recommendations. We studied national trends of aspirin use among intermediate- to high-risk patients in the US ambulatory care settings and compared the priority given to aspirin versus statins for CVD risk reduction. We also examined patient and health care provider contributors to the underuse of aspirin.

We used the 1993–2003 US National Ambulatory Medical Care Survey and National Hospital Ambulatory Medical Care Survey to estimate aspirin use by cardiovascular risk. Physician-noted cardiovascular diseases defined high risk. Intermediate risk was defined as having diabetes mellitus or multiple major risk factors. The proportion of patient visits in which aspirin was reported increased from 21.7% (95% confidence interval: 18.8%–24.6%) in 1993–1994 to 32.8% (25.2%–40.4%) in 2003 for the high-risk category, 3.5% (2.0%–5.0%) to 11.7% (7.8%–15.7%) for visits by patients diagnosed with diabetes, and 3.6% (2.6%–4.6%) to 16.3% (11.4%–21.2%) for those with multiple CVD risk factors. Beginning in 1997–1998, statins were prioritized over aspirin as prophylactic therapy for reducing CVD risk, and the gaps remained wide through 2003. In addition to elevated CVD risk, greater aspirin use was independently associated with advanced age, male gender, cardiologist care, and care in hospital outpatient departments.

Improvements in use of aspirin in US ambulatory care for reducing risks of CVD were at best modest during the period under study, particularly for secondary prevention, where the strongest evidence and most explicit guidelines exist. Aspirin is more underused than statins despite its more favorable cost-effectiveness. Aggressive and targeted interventions are needed to enhance provider and patient adherence to consensus guidelines for CVD risk reduction.

Aspirin is underused compared with statins especially for secondary prevention of cardiovascular disease, despite being more cost-effective.

Peter Wilson,  Ralph B. D’Agostino,  Daniel Levy … (1998)
The objective of this study was to examine the association of Joint National Committee (JNC-V) blood pressure and National Cholesterol Education Program (NCEP) cholesterol categories with coronary heart disease (CHD) risk, to incorporate them into coronary prediction algorithms, and to compare the discrimination properties of this approach with other noncategorical prediction functions. This work was designed as a prospective, single-center study in the setting of a community-based cohort. The patients were 2489 men and 2856 women 30 to 74 years old at baseline with 12 years of follow-up. During the 12 years of follow-up, a total of 383 men and 227 women developed CHD, which was significantly associated with categories of blood pressure, total cholesterol, LDL cholesterol, and HDL cholesterol (all P or =130/85). The corresponding multivariable-adjusted attributable risk percent associated with elevated total cholesterol (> or =200 mg/dL) was 27% in men and 34% in women. Recommended guidelines of blood pressure, total cholesterol, and LDL cholesterol effectively predict CHD risk in a middle-aged white population sample. A simple coronary disease prediction algorithm was developed using categorical variables, which allows physicians to predict multivariate CHD risk in patients without overt CHD.

Collaborative meta-analysis of randomised trials of antiplatelet therapy for prevention of death, myocardial infarction, and stroke in high risk patients.

(2002)
To determine the effects of antiplatelet therapy among patients at high risk of occlusive vascular events. Collaborative meta-analyses (systematic overviews). Randomised trials of an antiplatelet regimen versus control or of one antiplatelet regimen versus another in high risk patients (with acute or previous vascular disease or some other predisposing condition) from which results were available before September 1997. Trials had to use a method of randomisation that precluded prior knowledge of the next treatment to be allocated and comparisons had to be unconfounded-that is, have study groups that differed only in terms of antiplatelet regimen. 287 studies involving 135 000 patients in comparisons of antiplatelet therapy versus control and 77 000 in comparisons of different antiplatelet regimens. "Serious vascular event": non-fatal myocardial infarction, non-fatal stroke, or vascular death. Overall, among these high risk patients, allocation to antiplatelet therapy reduced the combined outcome of any serious vascular event by about one quarter; non-fatal myocardial infarction was reduced by one third, non-fatal stroke by one quarter, and vascular mortality by one sixth (with no apparent adverse effect on other deaths). Absolute reductions in the risk of having a serious vascular event were 36 (SE 5) per 1000 treated for two years among patients with previous myocardial infarction; 38 (5) per 1000 patients treated for one month among patients with acute myocardial infarction; 36 (6) per 1000 treated for two years among those with previous stroke or transient ischaemic attack; 9 (3) per 1000 treated for three weeks among those with acute stroke; and 22 (3) per 1000 treated for two years among other high risk patients (with separately significant results for those with stable angina (P=0.0005), peripheral arterial disease (P=0.004), and atrial fibrillation (P=0.01)). In each of these high risk categories, the absolute benefits substantially outweighed the absolute risks of major extracranial bleeding. Aspirin was the most widely studied antiplatelet drug, with doses of 75-150 mg daily at least as effective as higher daily doses. The effects of doses lower than 75 mg daily were less certain. Clopidogrel reduced serious vascular events by 10% (4%) compared with aspirin, which was similar to the 12% (7%) reduction observed with its analogue ticlopidine. Addition of dipyridamole to aspirin produced no significant further reduction in vascular events compared with aspirin alone. Among patients at high risk of immediate coronary occlusion, short term addition of an intravenous glycoprotein IIb/IIIa antagonist to aspirin prevented a further 20 (4) vascular events per 1000 (P<0.0001) but caused 23 major (but rarely fatal) extracranial bleeds per 1000. Aspirin (or another oral antiplatelet drug) is protective in most types of patient at increased risk of occlusive vascular events, including those with an acute myocardial infarction or ischaemic stroke, unstable or stable angina, previous myocardial infarction, stroke or cerebral ischaemia, peripheral arterial disease, or atrial fibrillation. Low dose aspirin (75-150 mg daily) is an effective antiplatelet regimen for long term use, but in acute settings an initial loading dose of at least 150 mg aspirin may be required. Adding a second antiplatelet drug to aspirin may produce additional benefits in some clinical circumstances, but more research into this strategy is needed.

*To whom correspondence should be addressed. E-mail: rstafford@ 123456stanford.edu

DOI: 10.1371/journal.pmed.0020353
PMC ID: 1283363
PubMed ID: 16277554
Copyright statement: Copyright: © 2005 Stafford et al. This is an open-access article distributed under the terms of the Creative Commons Attribution License, which permits unrestricted use, distribution, and reproduction in any medium, provided the original author and source are credited.

Related article ( companion): Flying in the Face of the Evidence; Low Aspirin Use in the US Outpatient Setting