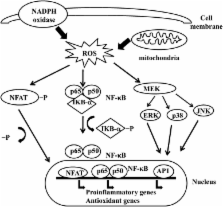 Reactive oxygen species (ROS) are produced by living organisms as a result of normal cellular metabolism and environmental factors, such as air pollutants or cigarette smoke. ROS are highly reactive molecules and can damage cell structures such as carbohydrates, nucleic acids, lipids, and proteins and alter their functions. The shift in the balance between oxidants and antioxidants in favor of oxidants is termed “oxidative stress.” Regulation of reducing and oxidizing (redox) state is critical for cell viability, activation, proliferation, and organ function. Aerobic organisms have integrated antioxidant systems, which include enzymatic and nonenzymatic antioxidants that are usually effective in blocking harmful effects of ROS. However, in pathological conditions, the antioxidant systems can be overwhelmed. Oxidative stress contributes to many pathological conditions and diseases, including cancer, neurological disorders, atherosclerosis, hypertension, ischemia/perfusion, diabetes, acute respiratory distress syndrome, idiopathic pulmonary fibrosis, chronic obstructive pulmonary disease, and asthma. In this review, we summarize the cellular oxidant and antioxidant systems and discuss the cellular effects and mechanisms of the oxidative stress.

Rodney Folz,  Igor N Zelko,  Thomas J Mariani (2002)
Superoxide dismutases are an ubiquitous family of enzymes that function to efficiently catalyze the dismutation of superoxide anions. Three unique and highly compartmentalized mammalian superoxide dismutases have been biochemically and molecularly characterized to date. SOD1, or CuZn-SOD (EC 1.15.1.1), was the first enzyme to be characterized and is a copper and zinc-containing homodimer that is found almost exclusively in intracellular cytoplasmic spaces. SOD2, or Mn-SOD (EC 1.15.1.1), exists as a tetramer and is initially synthesized containing a leader peptide, which targets this manganese-containing enzyme exclusively to the mitochondrial spaces. SOD3, or EC-SOD (EC 1.15.1.1), is the most recently characterized SOD, exists as a copper and zinc-containing tetramer, and is synthesized containing a signal peptide that directs this enzyme exclusively to extracellular spaces. What role(s) these SODs play in both normal and disease states is only slowly beginning to be understood. A molecular understanding of each of these genes has proven useful toward the deciphering of their biological roles. For example, a variety of single amino acid mutations in SOD1 have been linked to familial amyotrophic lateral sclerosis. Knocking out the SOD2 gene in mice results in a lethal cardiomyopathy. A single amino acid mutation in human SOD3 is associated with 10 to 30-fold increases in serum SOD3 levels. As more information is obtained, further insights will be gained.

Structure, function and evolution of glutathione transferases: implications for classification of non-mammalian members of an ancient enzyme superfamily.

Kaitlin Foley,  D Sheehan,  Erin Dowd … (2001)
The glutathione transferases (GSTs; also known as glutathione S-transferases) are major phase II detoxification enzymes found mainly in the cytosol. In addition to their role in catalysing the conjugation of electrophilic substrates to glutathione (GSH), these enzymes also carry out a range of other functions. They have peroxidase and isomerase activities, they can inhibit the Jun N-terminal kinase (thus protecting cells against H(2)O(2)-induced cell death), and they are able to bind non-catalytically a wide range of endogenous and exogenous ligands. Cytosolic GSTs of mammals have been particularly well characterized, and were originally classified into Alpha, Mu, Pi and Theta classes on the basis of a combination of criteria such as substrate/inhibitor specificity, primary and tertiary structure similarities and immunological identity. Non-mammalian GSTs have been much less well characterized, but have provided a disproportionately large number of three-dimensional structures, thus extending our structure-function knowledge of the superfamily as a whole. Moreover, several novel classes identified in non-mammalian species have been subsequently identified in mammals, sometimes carrying out functions not previously associated with GSTs. These studies have revealed that the GSTs comprise a widespread and highly versatile superfamily which show similarities to non-GST stress-related proteins. Independent classification systems have arisen for groups of organisms such as plants and insects. This review surveys the classification of GSTs in non-mammalian sources, such as bacteria, fungi, plants, insects and helminths, and attempts to relate them to the more mainstream classification system for mammalian enzymes. The implications of this classification with regard to the evolution of GSTs are discussed.

Free-radical chemistry of cigarette smoke and its toxicological implications.

D Church,  W A Pryor (1985)
Cigarette smoke contains two very different populations of free radicals, one in the tar and one in the gas phase. The tar phase contains several relatively stable free radicals; we have identified the principal radical as a quinone/hydroquinone (Q/QH2) complex held in the tarry matrix. We suggest that this Q/QH2 polymer is an active redox system that is capable of reducing molecular oxygen to produce superoxide, eventually leading to hydrogen peroxide and hydroxyl radicals. In addition, we have shown that the principal radical in tar reacts with DNA in vitro, possibly by covalent binding. The gas phase of cigarette smoke contains small oxygen- and carbon-centered radicals that are much more reactive than are the tar-phase radicals. These gas-phase radicals do not arise in the flame, but rather are produced in a steady state by the oxidation of NO to NO2, which then reacts with reactive species in smoke such as isoprene. We suggest that these radicals and the metastable products derived from these radical reactions may be responsible for the inactivation of alpha 1-proteinase inhibitor by fresh smoke. Cigarette smoke oxidizes thiols to disulfides; we suggest the active oxidants are NO and NO2. The effects of smoke on lipid peroxidation are complex, and this is discussed. We also discuss the toxicological implications for the radicals in smoke in terms of a number of radical-mediated disease processes, including emphysema and cancer.

The authors have no funding or conflicts of interest to disclose.