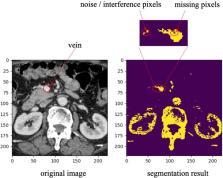 This study was to evaluate CT vein image segmentation and three-dimensional imaging in the anatomical structure of gastrocolic venous trunk before operation for colon cancer.

CT vein image segmentation and three-dimensional imaging can effectively evaluate the anatomical variation of gastrocolic vein trunk before operation, which is helpful for operators to correctly understand its anatomical structure and choose a reasonable anatomical approach.

Philip Quirke,  Werner Hohenberger,  A Perrakis … (2010)
The plane of surgery in colonic cancer has been linked to patient outcome although the optimal extent of mesenteric resection is still unclear. Surgeons in Erlangen, Germany, routinely perform complete mesocolic excision (CME) with central vascular ligation (CVL) and report 5-year survivals of higher than 89%. We aimed to further investigate the importance of CME and CVL surgery for colonic cancer by comparison with a series of standard specimens. The fresh photographs of 49 CME and CVL specimens from Erlangen and 40 standard specimens from Leeds, United Kingdom, for primary colonic adenocarcinoma were collected. Precise tissue morphometry and grading of the plane of surgery were performed before comparison to histopathologic variables. CME and CVL surgery removed more tissue compared with standard surgery in terms of the distance between the tumor and the high vascular tie (median, 131 v 90 mm; P < .0001), the length of large bowel (median, 314 v 206 mm; P < .0001), and ileum removed (median, 83 v 63 mm; P = .003), and the area of mesentery (19,657 v 11,829 mm(2); P < .0001). In addition, CME and CVL surgery was associated with more mesocolic plane resections (92% v 40%; P < .0001) and a greater lymph node yield (median, 30 v 18; P < .0001). Surgeons in Erlangen routinely practicing CME and CVL surgery remove more mesocolon and are more likely to resect in the mesocolic plane when compared with standard excisions. This, along with the associated greater lymph node yield, may partially explain the high 5-year survival rates reported in Erlangen.

Anatomic study of the superior right colic vein: its relevance to pancreatic and colonic surgery.

Nobutsugu Abe,  Toshiyuki Mori,  Tadahiko Masaki … (2006)
This study was designed to describe the precise anatomic venous tributaries of the superior mesenteric vein with special emphasis on the superior right colic vein (SRCV), which is seldom mentioned in the literature.

Kiyotaka Okuno (2007)
Background: Due to the westernization of the diet in Japan, the incidence of colorectal cancer has increased 4.5 times in the last 25 years. In this review, the recent results of surgical treatment for colonic cancer and the future perspectives in Japan are described. Materials and Methods: A multi-institutional registry of large bowel cancer in Japan of 10,809 patients with colonic cancer treated from 1991 to 1994 was investigated. The data have been published in the Guidelines of the Japanese Society for Cancer of the Colon and Rectum (2005). Regarding laparoscopic surgery, 1,495 patients with colon cancer were examined in a multicenter study between April 1993 and August 2002. Results: Radical resection with a curative intent is appropriate for 83–99% of the patients with stage I–III localized colon carcinoma. Adequate lymphadenectomy, including paracolic, intermediate and principal node dissection (D3 lymphadenectomy), is of critical importance for both the accurate staging and local control of the disease. This treatment protocol has now been accepted as a ‘standard’ operation by Japanese colorectal surgeons. For patients undergoing a curative resection for colon cancer, the 5-year survival rates vary between 62 (stage III) and 91% (stage I). Adjuvant chemotherapy using 5-FU/leucovorin or oral compounds is commonly administered to patients with stage III disease. Laparoscopic surgery for colonic cancer yielded a comparable oncological outcome to that reported for conventional open surgery in the Japanese registry for all disease stages. Conclusion: Radical resection with a D3 lymphadenectomy provided satisfactory 5-year survival for patients with stage I–III colon cancer in Japan. However, the survival of patients with stage IV disease is still unsatisfactory (only a 14% 5-year survival). Any further improvements depend on both identifying such patients at an earlier stage as well as developing new and effective treatment modalities.