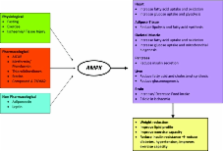 AMPK (AMP-activated protein kinase) is a heterotrimetric enzyme that is expressed in many tissues, including the heart and vasculature, and plays a central role in the regulation of energy homoeostasis. It is activated in response to stresses that lead to an increase in the cellular AMP/ATP ratio caused either by inhibition of ATP production (i.e. anoxia or ischaemia) or by accelerating ATP consumption (i.e. muscle contraction or fasting). In the heart, AMPK activity increases during ischaemia and functions to sustain ATP, cardiac function and myocardial viability. There is increasing evidence that AMPK is implicated in the pathophysiology of cardiovascular and metabolic diseases. A principle mode of AMPK activation is phosphorylation by upstream kinases [e.g. LKB1 and CaMK (Ca 2+/calmodulin-dependent protein kinase], which leads to direct effects on tissues and phosphorylation of various downstream kinases [e.g. eEF2 (eukaryotic elongation factor 2) kinase and p70 S6 kinase]. These upstream and downstream kinases of AMPK have fundamental roles in glucose metabolism, fatty acid oxidation, protein synthesis and tumour suppression; consequently, they have been implicated in cardiac ischaemia, arrhythmias and hypertrophy. Recent mechanistic studies have shown that AMPK has an important role in the mechanism of action of MF (metformin), TDZs (thiazolinediones) and statins. Increased understanding of the beneficial effects of AMPK activation provides the rationale for targeting AMPK in the development of new therapeutic strategies for cardiometabolic disease.

Risks for all-cause mortality, cardiovascular disease, and diabetes associated with the metabolic syndrome: a summary of the evidence.

J Lehmann, L B Moore, T A Smith-Oliver … (1995)
Thiazolidinedione derivatives are antidiabetic agents that increase the insulin sensitivity of target tissues in animal models of non-insulin-dependent diabetes mellitus. In vitro, thiazolidinediones promote adipocyte differentiation of preadipocyte and mesenchymal stem cell lines; however, the molecular basis for this adipogenic effect has remained unclear. Here, we report that thiazolidinediones are potent and selective activators of peroxisome proliferator-activated receptor gamma (PPAR gamma), a member of the nuclear receptor superfamily recently shown to function in adipogenesis. The most potent of these agents, BRL49653, binds to PPAR gamma with a Kd of approximately 40 nM. Treatment of pluripotent C3H10T1/2 stem cells with BRL49653 results in efficient differentiation to adipocytes. These data are the first demonstration of a high affinity PPAR ligand and provide strong evidence that PPAR gamma is a molecular target for the adipogenic effects of thiazolidinediones. Furthermore, these data raise the intriguing possibility that PPAR gamma is a target for the therapeutic actions of this class of compounds.

Dimethylbiguanide inhibits cell respiration via an indirect effect targeted on the respiratory chain complex I.